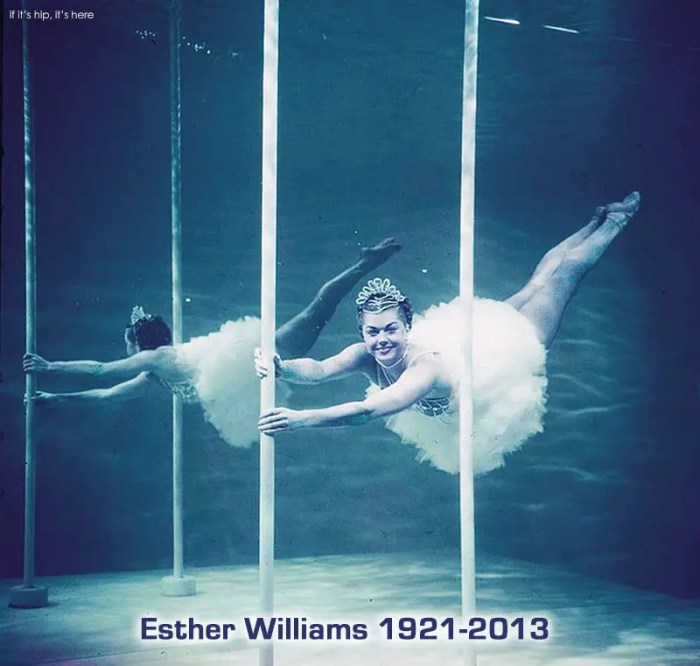 Most of my readers are too young to know who Esther Williams was. But if you like bathing beauties, pin-up girls, singing, acting, swimming, big production numbers (Busby Berkeley) and corny romances, you’ll want to know more about the legend we just lost at the age of 91. I grew up watching her beautiful face -predominately smiling at me from underwater- and marveled at her swimming, acting, singing, figure and ability to seemingly do it all submerged in a pool. She aged as gracefully as she swam, a beauty until the very end.

I’ve gathered some of my favorite images, facts, movies and more about the Million Dollar Mermaid for your entertainment and education.

“Wet she was a star.” –Hollywood producer Joe Pasternak Biography:
She was born Esther Jane Williams in Inglewood, CA on Aug. 8, 1921, to Lou, an artist and Bula, a member of the Inglewood Board of Education who helped raise funds for neighborhood school’s swimming pool. Esther took to the water at a very early age, earning her first paycheck at the age of eight as a towel girl at a local swimming pool. Her older brother Stanton Williams was the first member of the family to become a star by appearing in a handful of silent films and stage productions before his untimely death at age 16. His sister took the athletic route and gained fame as a teenage swimming champion; by 16, she had earned three national championship titles in freestyle and breaststroke. Eventually, she made the 1940 Olympic swimming team, but her dreams of a medal were dashed by the outbreak of World War II. Undaunted, she took up part-time work as a model while studying at Los Angeles City College. Theater impresario Billy Rose saw one of her print layouts and immediately contacted her to audition for his Aquacade, an all-singing, all-dancing, all-swimming production at the San Francisco World’s Fair. Former Olympic swimming medalist-turned-movie Tarzan, Johnny Weismuller, was the star of the show, and according to showbiz legend, he personally selected her to be his Aquabelle No.1. Williams’ looks and flawless skill with the show’s choreographed swimming duets captured the attention of audiences, as well as executives at MGM, who saw a box office bonanza in her abilities. She was quickly signed up for a screen test opposite none other than Clark Gable, the then-reigning King of the Movies. Both the star and the studio liked what they saw, and Williams was signed to a contract. Her movie debut came with a small role in 1942’s “Andy Hardy’s Double Life,” with star Mickey Rooney giving Williams her first screen kiss.

The film’s success led to a 10-year string of aquatic-themed musicals for Williams, each more lavish than its predecessor. There were occasional forays out of the MGM pool, such as 1946’s “The Hoodlum Saint,” which paired the 24-year-old actress with the 54-year-old William Powell as her love interest, and Berkeley’s terrific “Take Me Out to the Ball Game” (1949), in which baseball players Frank Sinatra and Gene Kelly vied for the hand of new owner Williams.

But for the most part, audiences preferred seeing Williams in the water in features like “Million Dollar Mermaid” (1953), a biopic about real-life swimming star Annette Kellerman, or “Jupiter’s Darling” (1955), which found her in the improbable role of a Roman woman who helps Hannibal (Howard Keel) swim the Tiber River. The aquatic features were challenging and even dangerous – prolonged exposure to the studio tank led to repeated eardrum ruptures, near drownings and a broken neck during a diving sequence for “Mermaid” – but Williams was “America’s Mermaid,” as the press dubbed her, so she had little choice in the matter. above: images of Esther in Million Dollar Mermaid

But she was also shrewd enough to realize that her particular brand of musical was limited – there were just so many films that could be built around her swimming routines. She departed MGM as audience demand for their musical product began to dry up, and moved to Universal for her first drama, “The Unguarded Moment” (1956). A lurid melodrama about a high school teacher (Williams) who becomes the object of obsession for a deranged student (John Saxon), the film raised eyebrows with its sexually suggestive subject matter but failed to translate into a lasting dramatic career for Williams. She appeared in several more forgettable features before retiring at the demand of her third husband, actor Fernando Lamas, in the early 1960s. In the late latter part of that decade, Williams was approached by swimming pool manufacturers, the Delair Group, to license her name to their above-ground models. The decision was a savvy one, and the line became one of the most popular for suburbanites across the United States. Further licensing agreements led to her own line of swimwear for older women, based on the suits she wore in her movies, and a modern line for younger women. All three business decisions proved to be lucrative and popular for the former actress.

In 1999, Williams penned her autobiography, The Million Dollar Mermaid

, with co-author Digby Diehl. The tome generated a great deal of press for its controversial stories about her love life, which included trysts with co-stars Victor Mature and Jeff Chandler; a revelation about the latter actor’s penchant for women’s clothing was among the book’s most scandalous statements. Williams also discussed her three marriages (she had a fourth after the book was written), which included loveless unions with a former college classmate and singer/actor Ben Gage, whom she described as an alcoholic spendthrift.

In addition, the book recounted her various struggles with studio heads, fending off the amorous advances of Weismuller and Howard Hughes, and dealing with the egos of co-stars like Gene Kelly and Lamas, who reportedly demanded total servitude from Williams. 10 Fun Facts About Esther
1. She First Gained Fame in California as a Competitive Swimmer.
Born in 1921, Williams started swimming at an early age and quickly distinguished herself for her speed. By 16 she was winning national championships, and by 19 she had shattered records for breast stroke and freestyle. Williams planned on competing in the 1940 Tokyo Olympics, but the event was canceled due to the outbreak of World War II.

2. in 1941, she signed with MGM studios, with whom she began starring in “Aqua-musicals.”
In her memoir, Williams said that just a year after the end of her swim racing career she, “walks through the gates of MGM a year later and swims her way to movie stardom.” Her first films helped to show off her swimming abilities by prominently featuring her in pools and bathing suits. 3. She appeared in some of the highest-grossing movies of the 1940s and 1950s.
The 1940s and 50s catapulted her to stardom. During this movie she started in movies with Mickey Rooney, Lucille Ball, Gene Kelly, and Frank Sinatra. Many of her films, like Thrill of Romance and Neptune’s Daughter were some of the highest grossing films in the years they were made.

4. Her nickname was the “Million Dollar Mermaid.”
The name of one of her most popular films, Million Dollar Mermaid would stick with her as a nickname for the rest of her life. The 1952 film was a major hit and earned an Academy Award Nomination for Best Cinematography. The nickname also stuck because as her fame grew in the 1940s and 1950s, so too did her income. 5. She left MGM in 1959 and retired from movies in the 1960s.
Her memoir explains that the time period around 1959 was a dark time for her.She had recently gotten a divorce, she suffered from alcoholism and exhaustion, and she found herself in an increasingly fragile mental state. She eventually retired from film.

6. She created a line of swimwear and lent her name to a brand of swimming pools.
Later in her life, Williams helped to create a line of retro-style swimwear like the kind she wore in her hit films. This business, as well as the pool company named after her, helped to keep her busy until her death. 9. In 1959, Cary Grant claims he used LSD with Williams, she confirmed this in her autobiography. Esther Williams aged beautifully as you can see from these later photos (with the admitted help of a face lift or two): The Million Dollar Mermaid will be missed. Swim In Peace, Esther. information and images courtesy of IMDB and  TCM