Unless you were ‘off the grid’ for the past 24 hours, you had to have read, engaged in or at least heard about the color controversy surrounding #TheDress.  Now that we know the dress actually is Blue and Black, here’s a bit about the dress drama (#Dressgate) and the frock itself. Including the fact that it comes in 4 color variations, none of which are White and Gold.

Initially posted by musician Caitlin MacNeill on Tumbler with the caption “guys please help me – is this dress white and gold, or blue and black? Me and my friends can’t agree and we are freaking the fuck out”, the photo set off a global controversy.

I saw White and Gold. Definitively. I was convinced and adamant. My confidence coming from years of choosing the exact colors for ink printing with percentage breakdowns of CMYK and digital designing with hex colors. I prided myself on being able to spot whether there is too much yellow in that red or too little black in that pink and confirming my guesses with Photoshop and color channels. So when I learned that the dress was actually Blue and Black, I was not just thrown, I was totally freaked out. “Have people been seeing my work the way it was intended? When someone doesn’t like my color choices, is it because they see them differently than I do?”

It wasn’t a trick, nor a magical gif that changes colors. It didn’t matter what your brightness settings were or on which device you viewed the image. So why were half the people seeing the dress as White and Gold, while the other half were seeing it as Blue and Black?

There were online discussions of rods and cones. Aging eyesight and youthful eyesight. Wired offered these possible explanations  and Vice magazine asked Dr. Jay Neitz, PhD, a color vision researcher at the University of Washington (who, by the way, saw it as White and Gold initially).

I believe it was seeing the second image of the dress being worn at the wedding (shown below) and then viewing the first image again that changed the way my brain saw it. The same held true for Dr. Neitz. Neither article was positive about the explanation and instead offered up some theories.

The internet is having a great time with #TheDress. Various memes, articles and tweets have been hilarious.

Here’s how a few celebrities weighed in on Twitter: 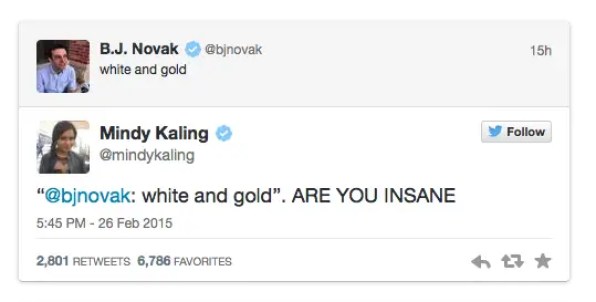 Brands Respond
Adweek’s adfreak published a fun post here about how various brands such as Lego, Duracell, Guinness and other’s playfully responded to the color question. Here are a few responses. 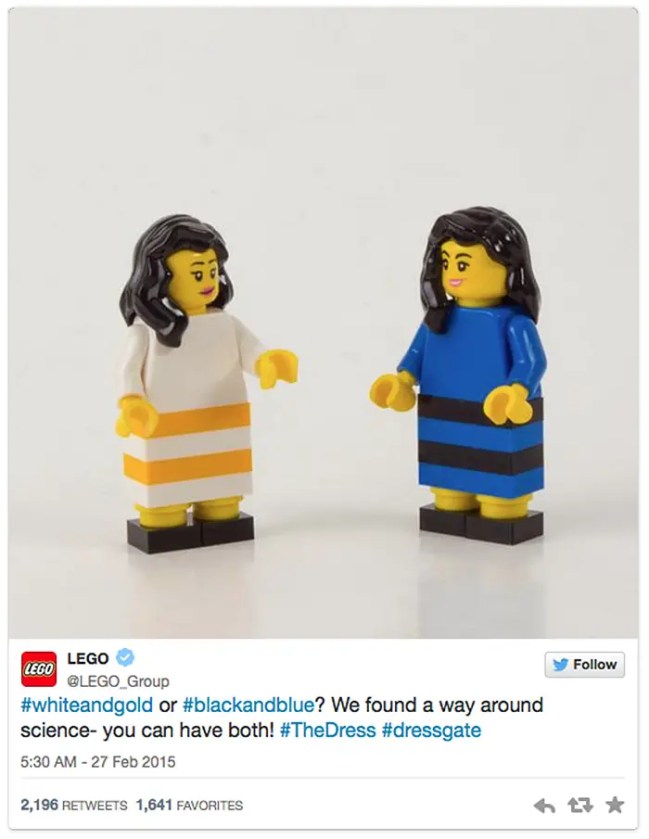 So, what about the actual dress?

The knee-length dress is from Roman Originals in the UK. It is made of 8% Viscose 27% Polyamide and 5% Elastane. The lace Bodycon dress features a keyhole back with a concealed zipper and costs £50.00. In addition to the Royal Blue version, it is available in Ivory, Pink and Scarlet – each with black lace. (Sorry no White and Gold). 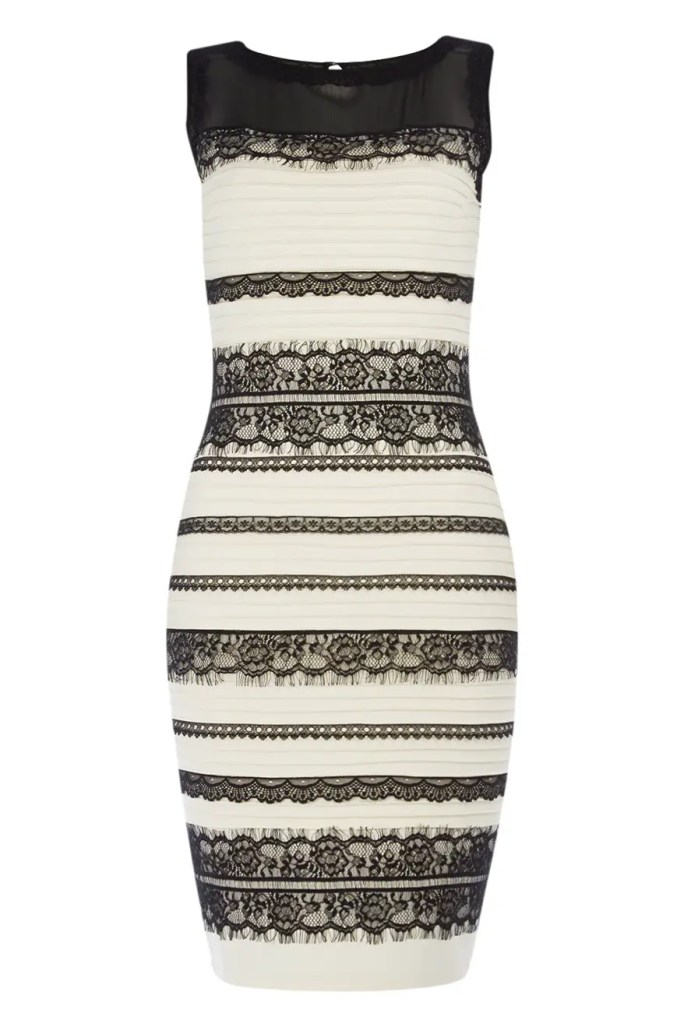 Thanks to Roman Originals for images and information about the dress.

Another Round Of Look What I Found! Weird & Wonderful Web Finds.