` The Best Modern Coffins. When You Want To Go Out In Style. - If It's Hip, It's Here
Skip to content 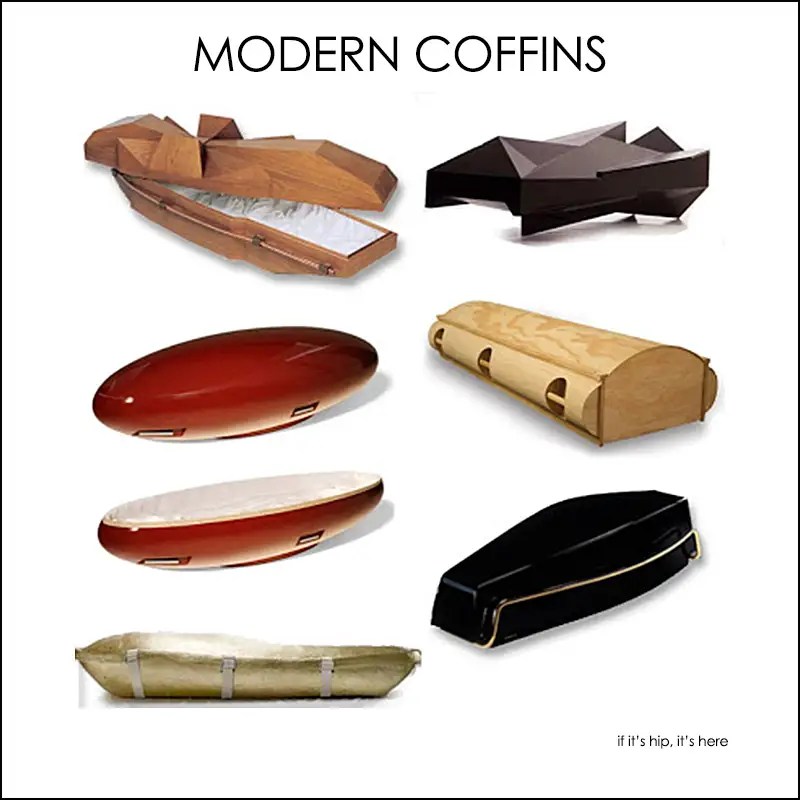 Halloween is just around the corner, so what better time than now to introduce you to the coolest modern coffins and caskets on the market.

First off, These Cheesy Novelty & Fantasy Coffins Don’t Count As Modern:
Sure, there are outrageous novelty and fantasy coffins shaped like everything from giant fish to shoes and by now, you have likely seen the gold-plated coffin by Batesville Casket Company, the one in which Michael Jackson chose to be buried. Memorable? yes. Modern? No. above: metal painted coffins from Art Casket are more like airbrushed van art than modern design

And some of you may even have seen the slew of printed and custom graphic cardboard eco friendly coffins by companies like Colourful Coffins, Creative Coffins and Dying Art on various blogs or sites, like those shown below. above: cardboard printed coffins may be modern, but they certainly are not stylish

And yes, there are even coffins for Baseball fans and Star Trek lovers. But these are ‘novelty’ coffins that I would call tacky as opposed to modern.

When it comes to truly modern coffins, there are hardly any to speak of. That’s why I wanted to show you some of the ones that do exist. German-based Architect Gregor Haiduk also happens to be a modern coffin designer. His Coffin Tec caskets are custom made to order and crafted from NDF natural woods and colored lacquer finishes. The carrying bars are made of iron or copper and fastened with copper or metal modern fittings. White linen lined interiors add to his faceted and unusual caskets. These are truly works of art.

One of his first prototypes, designed in 1998: The Octavian and The Classic: The Dolphin casket for children: The Uono Cocoon coffin is a modern oval pod with a high gloss lacquer finish that is entirely made by hand. Developed by Andreas Spiegel in cooperation with various funeral directors, the very modern lightweight Cocoon coffin is available in 14 different colors. The handles are neatly tucked into the design and easily extend for handling. It is specially made of a material that is firm, but actually bio-degrades in 10 to 15 years: This coffin was mass produced in Germany and sold, but is no longer in production, nor can I locate the company. My apologies.

9. J. Marlow’s Modern Motorcyle Lover’s Coffin
J. Marlow Company of Michigan also makes custom caskets. The Motorcycle Lovers coffin is clad in whip-stitched black leather with biker-like accents. The design is taken from the concept of a saddlebag with the added touch of stainless steel exhaust for the handles and the old school look of the chromed fishtail ends. The top is accented with chrome studs: Things That Fall is a gallery that offered two beautiful sleek modern coffins by artist Joe Scanlan. Joe Scanlan is the artist who created the DIY coffin for IKEA.

The Custom is an elegant and unique vessel crafted in Australia entirely from Tasmanian Blackwood. As the brand name implies, Custom is no off-the-shelf coffin, with not one of its construction angles being a reasonable 90 degrees. Day Bed is just as meticulously crafted as Custom, but its care is devoted to a gorgeous inlaid surface that creates an illusory, coffered effect. Very clean and very modern. Both the Custom and the Daybed caskets each cost $15,000. and are sold.
Things That Fall.

Another designer, Brian Tenorio, is on the brink of introducing a line of upscale designer coffins. The Lux Mortem designer caskets are designed and made in the Philippines. Simple and sleek, the upcoming designs are said to range from classic designs to contemporary artforms. The launch collection will be available in Manila’s top funeral parlors in November 2009.

above: renderings of the Radiance and the Emerald Cut caskets
Lux Mortem will be launching these lines in 2010.

13. TenderRest NextGen Coffins
And for those who prefer a more eco-friendly resting place, TenderRest of New Zealand offers a line of Bamboo coffins whose simplicity and modern style is an elegant, lightweight and earth friendly alternative. 14. The Ecopod
And there’s the Ecopod. More modern in function and materials than looks per se, the Ecopod from ARKA is made by hand from recycled newspapers and hand finished with paper made from recycled silk and mulberry leaves, the Ecopod is available in a range of colours with screen printed motifs, plain white, or gold. The inner base of the Ecopod is covered with a natural calico mattress and the interior painted light cream, or white, using eco-friendly paints. As an optional extra, the walls of the interior can also be lined with feathers in a choice of colours, including white, red, cream or pale blue. Learn more about the Ecopod.

Although this isn’t an available option, this project by artist and designer Charles Constantine deserves noting:
15. The Memento Coffin/table In the artists own words:
Memento is a dual purpose piece of furniture that functions as a coffee table during its first stage, and as a coffin in its second. Memento will absorb the life and love that occurs around it, and will create personal identifications with the coffin, through the patina it acquires over time. Memento creates value through the symbolism inherent in the design.

The body is meant to be placed in a fetal position, which gives the piece its shape. This way the body can be buried facing the east, toward the rising sun, which is a common symbol of rebirth. The casket is made of pine, and treated with a soap finish, making it ecologically friendly. The open bottom construction, will help the body reintegrate into the environment faster. Memento is an attempt to bring one of our most sacred rituals back into the hands of the family, by encouraging home death care.
See more of Charles Constantine’s work.

Our curated board of Design for Death:

Ah, now I can rest in peace. And in style.