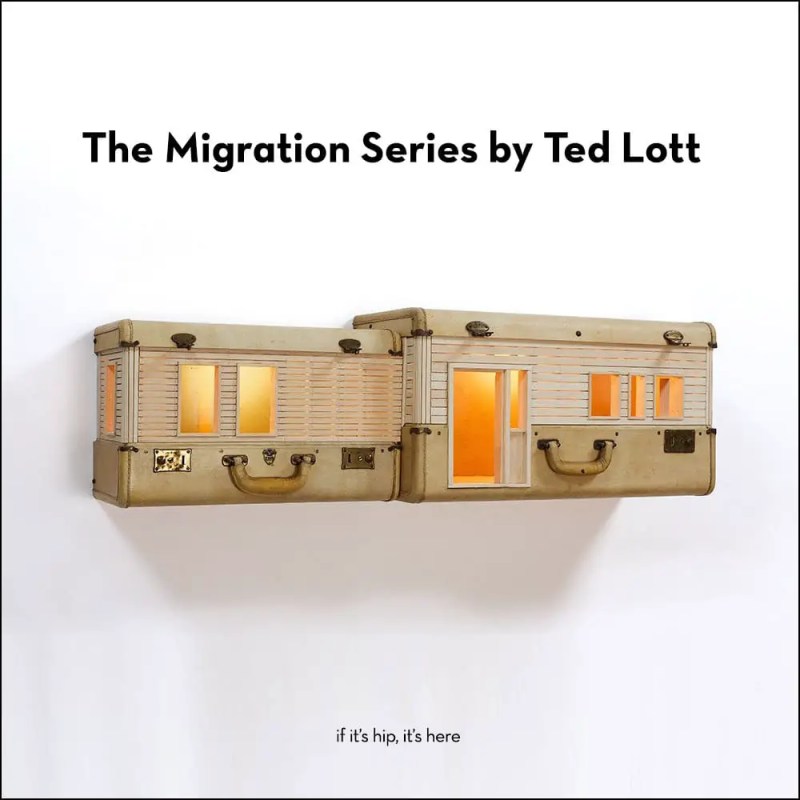 When I first came across these I didn’t know if I was looking at custom dollhouses or travel cases. Turns out, I was looking at both. This series of architecturally embellished travel and suitcases by artist Ted Lott was inspired by immigrants seeking the promise of a better life here in America.

Ted Lott is part craftsman, part designer and part artist who received a BFA in Woodworking and Furniture Design from the Maine College of Art and his MFA from the University of Wisconsin Madison. His work revolves around the history of wood in Material Culture and Architecture.

Rethinking the concept of home for those migrating from other countries, often with their entire lived packed into one suitcase, the transformed trunks in the Migration Series are lit from within becoming a literal depiction of “leaving the porch light on.” Now living with his family in Michigan, Lott loved to cruise flea markets while teaching at Murray State University in Western Kentucky, which is where he found the case upon which the first in the Migration Series is based.

The architectural lines of this case suggested something to me, and I carried it back to my studio without a clear idea of what to do. As is often the case, the act of working with it in the studio helped to clarify the idea, and by the time it was done I knew I had a whole new body of work, the Migration Series. – Ted Lott

The photos below are Ted’s most recent addition to the ongoing series posted on his Instagram feed. 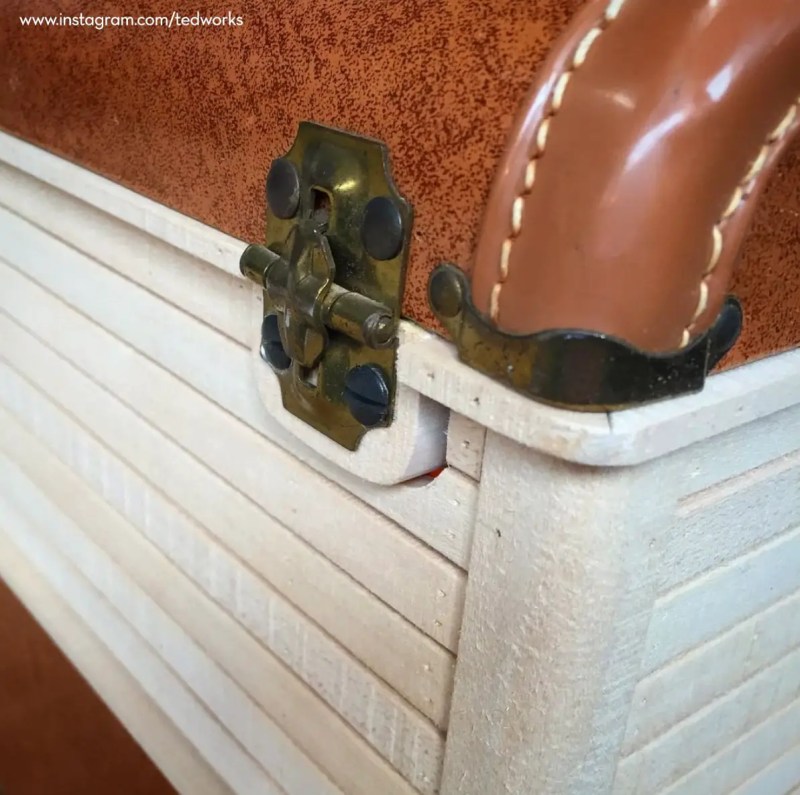 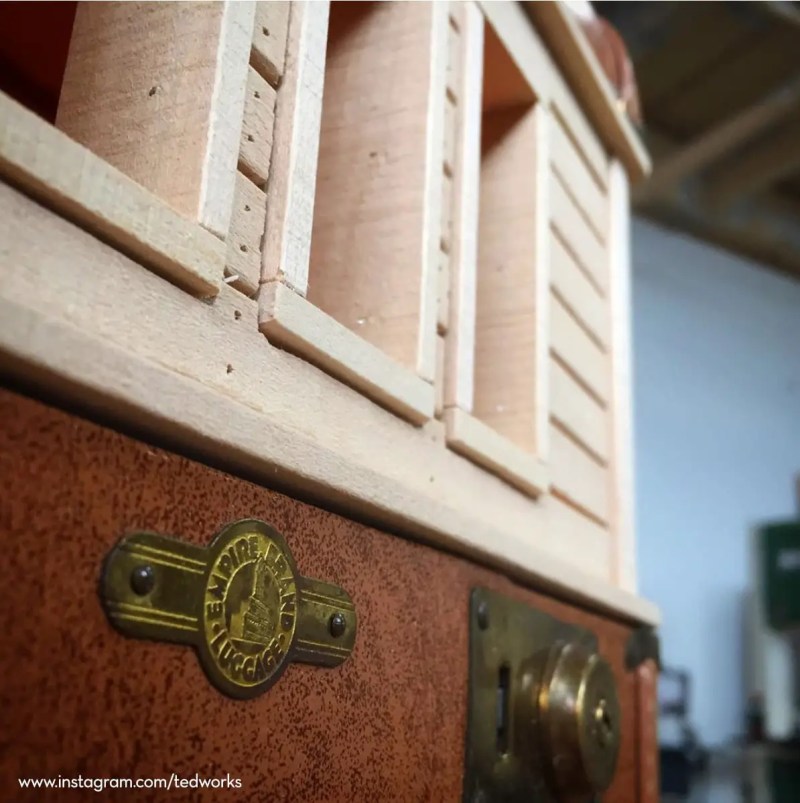 These works take the products of material culture, cases and trunks, and through them investigate what it means to be an American. We are a country of Immigrants, nearly all of our ancestors came here from somewhere else, often carrying only a suitcase, to strike out anew, and create a better life for those of us who came after. The lights inside are not just functional, but serve to remind us of the warmth of that promise. Let’s remember to leave the lights on, to illuminate the way for everyone who wants to seek a better life through the same hard work, enterprise and sacrifice that truly makes America great! ???????? – Ted Lott

Artist Statement (from his website):
Along with clothing, food and water, shelter is one of the basic requirements for the sustenance of human life. During most of our history shelters were made of local materials; timber, stone, hide, grass and mud provided protection from the elements. However, with the coming of the industrial revolution, locally sourced materials gave way to industrially produced ones, 2×4’s and nails replaced timbers and elaborate joinery.

Today, in America and all over the world, balloon frame construction is a primary means by which shelter is created from wood. While connoisseurs of woodworking have long lauded the skill, precision, and exacting craftsmanship required to create a post and beam structure, the majority of our homes, commercial buildings and other structures are made using the balloon frame method.

By combining a diminutive version of this building system with chairs and other objects pulled from the everyday domestic environment I honor the logic and engineering brilliance of stud frame construction, taking what we usually only see when we pass by construction sites, and exaggerating it in a way that renews our vision and understanding. The work uses the bandsaw as a scale sawmill to generate perfectly proportioned raw materials. An engagement emerges between the architecture and found objects, each bringing it’s own visual language while differently scaled systems try to occupy the same space. Unexpected solutions often emerge from the two finding ways to accommodate the other, and pointing to the deep relationship between the design of domestic objects and the architecture of the space itself.

This method of construction is ubiquitous but hidden, common yet almost completely overlooked. Simple, however requiring its own set of skills and knowledge to execute successfully, it is emblematic of the human struggle. Like us, these structures are regular, nevertheless they strive to be unique, transforming their everyday bones into something beyond the banalities of basic needs. To me, this is the reason for making objects, to take the ordinary and make it extraordinary. Through this process we point to the complex interaction of necessity, artistry, economy, function and beauty present in the original objects, while highlighting the possibilities of transformation and growth that are a requirement for the continuation and evolution of life.

About the Artist:
Ted Lott is a Craftsperson, Designer and Artist whose work revolves around the history of wood in Material Culture and Architecture. Lott received his BFA in Woodworking & Furniture Design from the Maine College of Art, and his MFA from the University of Wisconsin Madison. Lott has exhibited work in numerous solo exhibitions, including at the Haystack Mountain School of Crafts, Swarthmore College, and the University of North Carolina-Charlotte College of Art & Architecture. He has received grants from the Elizabeth Greenshields Foundation, Emma International Collaborative Conference, Joan Mitchell Foundation, and the Belvedere Fund for Professional Development in Crafts. He has been an Artist-In-Residence at Anderson Ranch Art Center, Kohler Arts/Industry Program, Arrowmont School of Arts & Crafts, Center for Turning & Furniture Design, and the Vermont Studio Center. He has taught Woodworking & Furniture Design at Edinboro University of Pennsylvania, Murray State University, Indiana University of Pennsylvania, and teaches workshops throughout the United States. Lott lives with his family in Grand Rapids Michigan.

Two other artists we featured who use suitcases in their works:
The Memory Suitcases by Yuval Yairy and the Encased by Wei Li

The Miniature Life Calendar 2018 Is Here