Artist Joe Black uses a laborious technique of assembling hand-painted or altered everyday objects which have a imply meaning within the final image they create. END_OF_DOCUMENT_TOKEN_TO_BE_REPLACED

Artist Joe Black’s Made In China was created using using more than 5,500 toy soldiers.The portrait is of a Chinese soldier boy taken by well-known photojournalist Robert Capa and appeared on the May, 1938 cover of LIFE magazine. The colored, molded plastic toy soldiers used in the project were manufactured in China, hence the title “Made in China”. END_OF_DOCUMENT_TOKEN_TO_BE_REPLACED 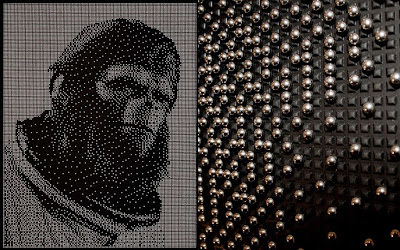 Artist Joe Black doesn’t monkey around when it comes to interesting mosaics. Known for his assemblages crafted from vintage badges, Lego bricks and plastic toy soldiers, he’s used ball bearings to recreate two portraits of Cornelius and one of Zira, the monkeys played by Roddy McDowell and Kim Hunter, respectively from Escape From Planet Of The Apes the third movie in the original movie franchise. END_OF_DOCUMENT_TOKEN_TO_BE_REPLACED