you are here: if it's hip, it's here » cindy sherman

Artist, model and photographer Cindy Sherman has been having a ball on Instagram posting selfies she distorted with the Facetune app and with the Youcam Makeup App. It appears the fun began on May 12th with a fairly mild version captioned with “New app Facetune. #notyourusualselfie” But since then she has pushed them (as she does with much of her work) beyond the odd and into the disturbingly delightful. END_OF_DOCUMENT_TOKEN_TO_BE_REPLACED

While on their way to the Art Production Fund’s gala, Concrete Jungle*, last March, photographer Steven Klein snapped some pics of famous faces as they sat in the back seat of their transportation to the shindig. But what made them compelling is that the artists and photographers’ identities are concealed by creepy masks. END_OF_DOCUMENT_TOKEN_TO_BE_REPLACED

We all know the famous LV monogram. It’s been used on their exceptional leather goods since 1965 and is now recognized as a global symbol of luxury. Since its inception, it’s been produced, officially, in a myriad of interpretations by the brand (Stephen Sprouse, Murakami, etc). It’s also been produced -unofficially- in bad copies, good reproductions, fine art, on cars, even on houses. To celebrate what is almost 50 years since the mark’s design, the brand has asked Christian Louboutin, Cindy Sherman, Frank Gehry, Karl Lagerfeld, Marc Newson and Rei Kawakubo to take inspiration from the iconic Louis Vuitton Monogram and create their own limited editions. END_OF_DOCUMENT_TOKEN_TO_BE_REPLACED

This exhibition, organized by Carol Squiers and Vince Aletti, presents the most innovative fashion photography of the last few years, from photographers who draw on a range of influences, including art, sexuality, narrative, digital media, and youth culture. END_OF_DOCUMENT_TOKEN_TO_BE_REPLACED 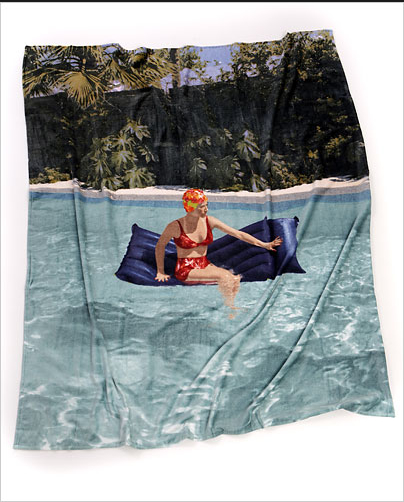 Above: One of this years’ wonderful artist series beach towels

Earlier in 2007, Target and the Art Production Fund came out with a series of four artist-designed towels. END_OF_DOCUMENT_TOKEN_TO_BE_REPLACED