` Weird Beauty Fashion Photography - If It's Hip, It's Here
Skip to content 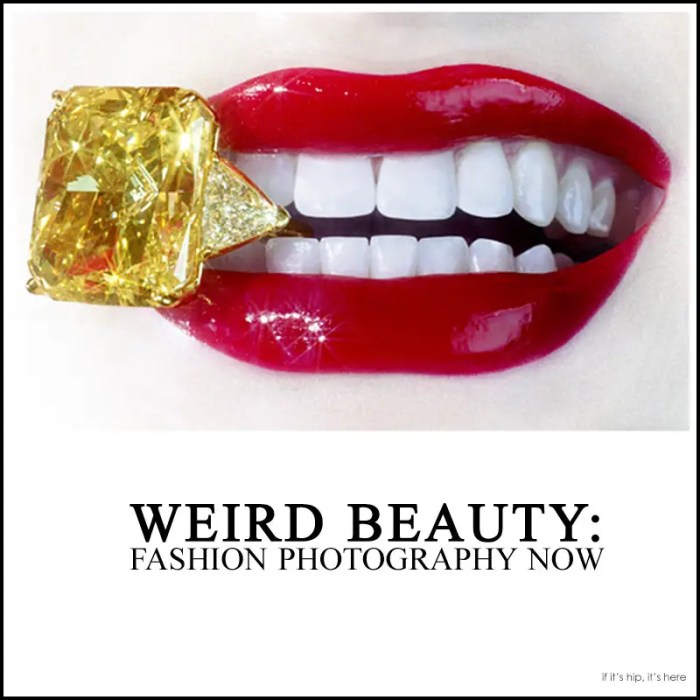 This exhibition, organized by Carol Squiers and Vince Aletti, presents the most innovative fashion photography of the last few years, from photographers who draw on a range of influences, including art, sexuality, narrative, digital media, and youth culture.

It also considers the impact of graphic design on the way that fashion photography is presented. Along with original photographic prints, the exhibition features hundreds of tear sheets and magazine covers from both mainstream and independent publications.

Some pieces from the show: Represented in the international group of photographers are the photographers listed at the end of this post. I have found some of their work from the referenced collections in the exhibit and included them here, however, these exact pieces may not be in the show:

Mert Alas and Marcus Piggott, a London-based collaborative team that produces haunting stories with a strong emphasis on polished and flawless beauty. In the 44-page story I’m A Marionette (Pop Magazine S/S 2007), the duo designed an eerie set of women-cum-marionettes gazing lifelessly into the distance.

Here are 2 examples from that story: And here are two shots from that shoot: Cindy Sherman, who employs her iconic method of costuming in a series of photographs produced for Vogue Paris (Merci Cindy!, August 2007) in order to promote Balenciaga clothing items. Here are two shots from that editorial: Sølve Sundsbø, based in London, whose Batty Boy (Arena Homme, Summer–Autumn 2007) introduces a ghostly male figure wearing an oversized square coat and heavy black makeup, as he stands motionless in a dim environment;
Two of the Batty Boy shots. Juergen Teller, who expands his advertising campaign for Marc Jacobs into a fashion story in Purple Fashion Magazine (Summer 2007), as he captures his models— William Eggleston, Dakota Fanning and Charlotte Rampling— in an array of awkward and brutally honest predicaments.

A 2004 shot of Charlotte Rampling by Juergen Teller: and one of his 2007 shots of Dakota Fanning: British photographer Tim Walker, who looks to the memorable Horst P. Horst photograph of Dalí costumes (1939) as inspiration for his story A Magic World (Vogue Italia, January 2008). Here are two shots from that editorial. Also featured in Weird Beauty are several photographers not commonly associated with fashion, including Nan Goldin, who contributes regularly to the German children’s fashion magazine Kid’s Wear, and Collier Schorr, who shoots for fashion publications such as Doingbird, i-D, and Numéro Homme.

Below are 2 of Nan Goldin’s rare fashion shots from a French Vogue editorial: The exhibition is organized by ICP curator Carol Squiers and ICP adjunct curator Vince Aletti.
This exhibition is supported, in part, by public funds from the New York City Department of Cultural Affairs.

Showing from January 16th through May 3rd at the International Center of Photography (ICP) Museum in New York.

Watching a Movie Projected Onto An Iceberg Makes for Magical Nighttime Photos.

Welcome To New York 1911. Amazing Footage Will Take You Back In Time.