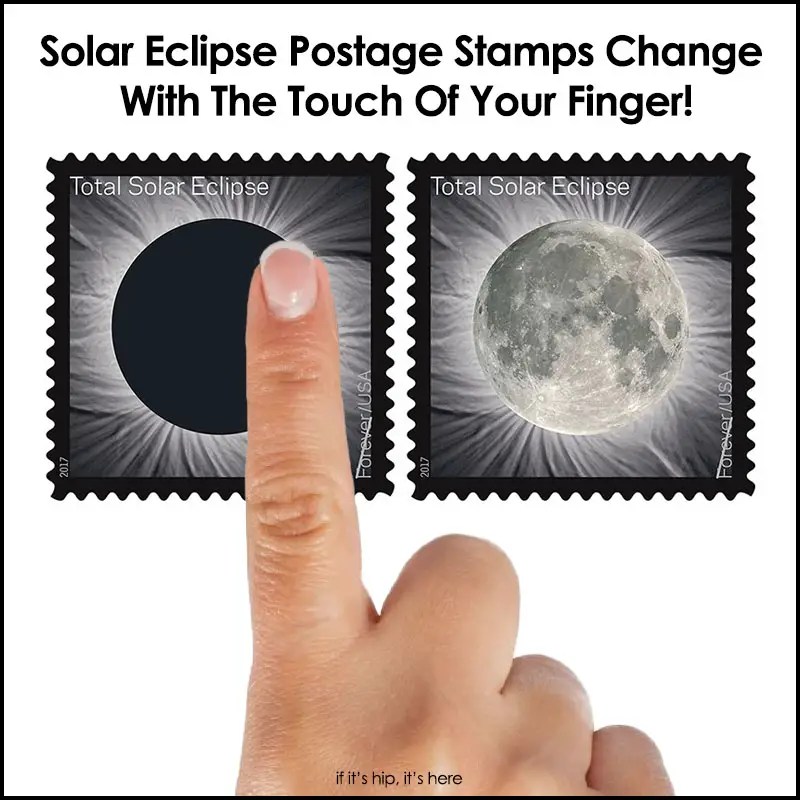 The new “Total Eclipse of the Sun” U.S. postage stamps designed by Antonio Alcalá, and using real photos from a former Astrophysicist, are the very first to use Thermochromic ink, which reacts to the heat of your touch. Placing your finger over the black disc on the stamp causes the ink to change from black to clear to reveal an underlying image of the moon.

What Is Thermochromic Ink?
The Total Eclipse of the Sun stamp is the first U.S. stamp to use thermochromic ink, which reacts to the heat of your touch. (You may recall that we published a very interesting post about a table made with Thermochromic inks here) Placing your finger over the black disc on the stamp causes the ink to change from black to clear to reveal an underlying image of the moon. The image reverts back to the black disc once it cools.

Where did the photos for the stamps come from?

Astrophysicist Fred Espenak (who is referred to as “Mr. Eclipse”) photographed both images for the stamp that commemorates the total solar eclipse of August 21, 2017 that crosses the USA. The stamp uses a photograph, above, taken by astrophysicist Fred Espenak of a total solar eclipse that was seen over Jalu, Libya, on March 29, 2006.

“I’m honored to have my images on this unique stamp. But more importantly, the stamp will spread the news about America’s Great Eclipse to many more people than I could ever reach. A total eclipse of the Sun is simply the most beautiful, stunning and awe-inspiring astronomical event you can see with the naked eye. But you’ve got to be in the 70-mile-wide path of totality that runs across the nation from Oregon to South Carolina.” – Fred Espenak

Mr. Espenak (who is known as Mr. Eclipse) also took the photograph of the full moon, shown below, that is revealed by pressing upon the stamp image from his observatory in Portal, Arizona in 2010. 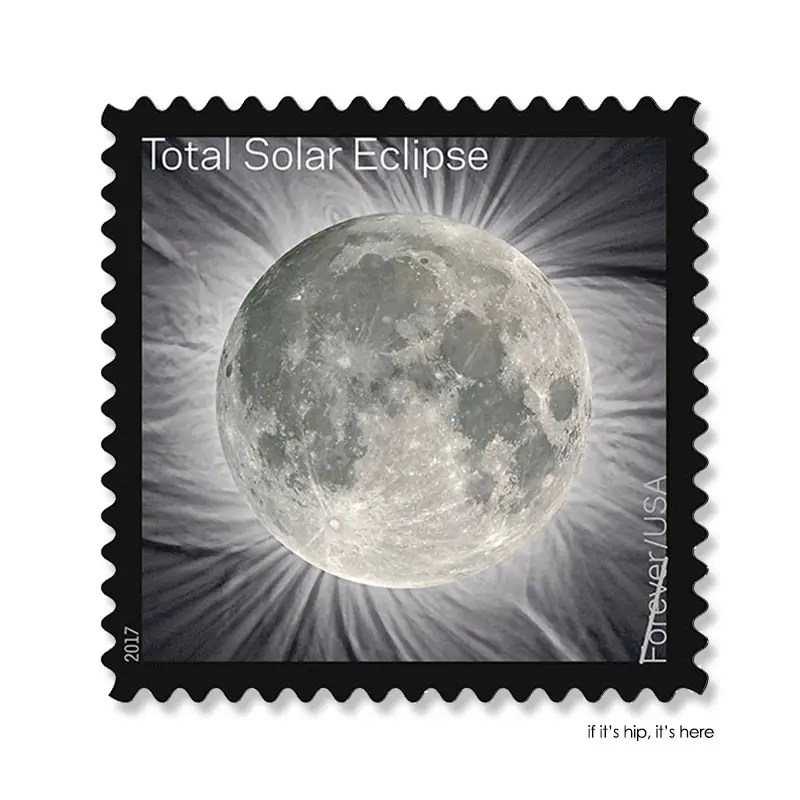 The reverse side of the stamp pane shows the path across the United States of the forthcoming August 21, 2017, total solar eclipse and gives the times that it will appear in some locations.

About The Solar Eclipse

On August 21, 2017, tens of millions of people in the United States will have an opportunity to view a total eclipse of the Sun. A total solar eclipse was last seen on the U.S. mainland in 1979, but only in the Northwest. The eclipse this summer will sweep a narrow path across the entire country—the first time this has happened since 1918. The U.S. Postal Service® anticipates this rare event with a stamp celebrating the majesty of solar eclipses.

A total eclipse of the Sun occurs when the Moon completely blocks the visible solar disk from view, casting a shadow on Earth. The 70-mile-wide shadow path of the eclipse, known as the “path of totality,” will traverse the country diagonally, appearing first in Oregon (mid-morning local time) and exiting some 2,500 miles east and 90 minutes later off the coast of South Carolina (mid-afternoon local time).

A total solar eclipse provides us with the only chance to see the Sun’s corona—its extended outer atmosphere—without specialized instruments. The corona during an eclipse looks like a gossamer white halo around a black disk, or like the petals of a flower reaching out into space. 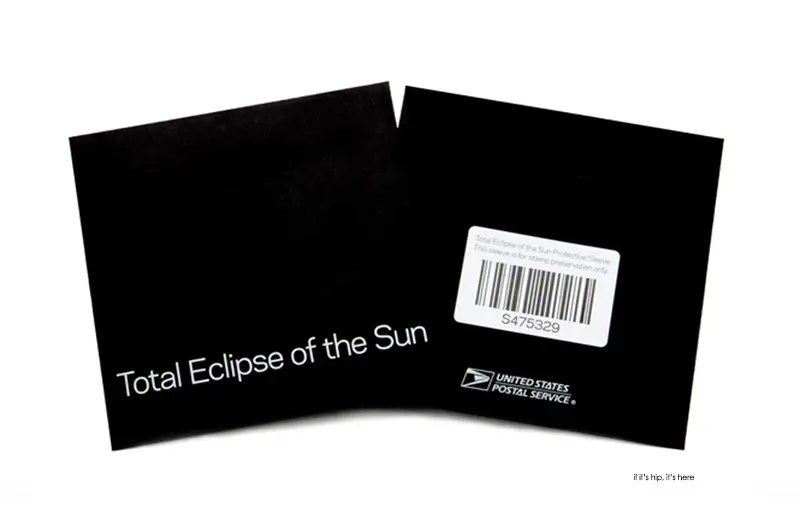 Thermochromic inks are vulnerable to UV light and should be kept out of direct sunlight as much as possible to preserve this special effect. To help ensure longevity, the Postal Service is offering a special envelope to hold and protect the stamp pane for .25 cents. Preserve the integrity of your Total Eclipse of the Sun Forever® stamp pane with this protective sleeve specifically designed for stamp preservation. Buy it here 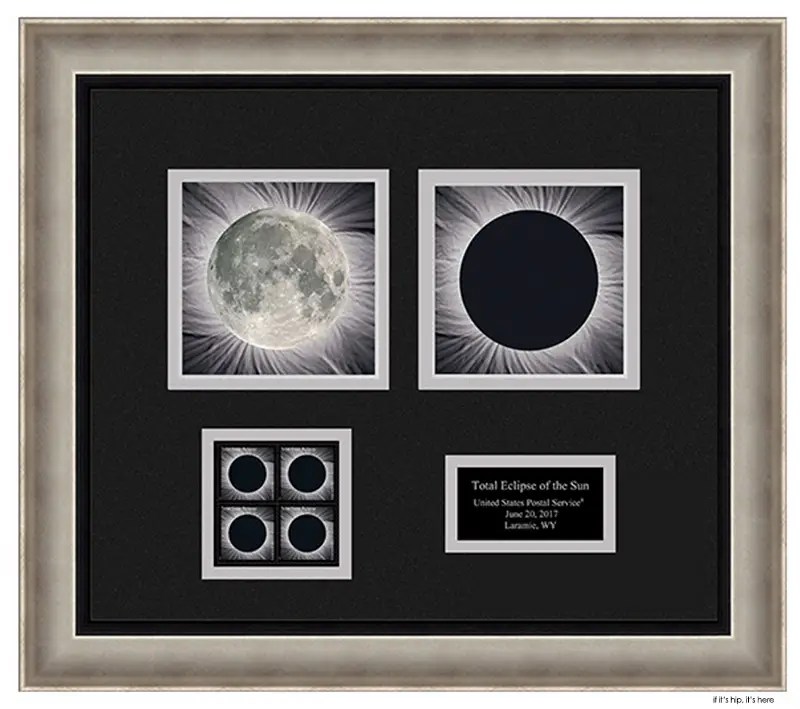 Explore the marvels of the universe with this new 15.25 x 13.25 -inch framed piece, which features artwork from the stamp as it appears both with and without the thermochromic ink that when heat-activated, gradually reveals an image of the full moon. Also included is a block of four Total Eclipse of the Sun Forever® stamps along with an engraved plaque bearing the First Day of Issue details. Buy it here

Also available for the more serious collector:
Total Eclipse of the Sun Folio This colorful, inventive folio commemorates an extraordinary event occurring on August 21, 2017: For the first time in almost four decades, a total eclipse of the Sun will be visible from the U.S. mainland, sweeping across the width of the country and casting a 70-mile-wide shadow path.

The 6 x 9-inch folio is ideal for exploring the wonders of science with both children and adults. In addition to displaying a map of the eclipse’s journey, it includes a translucent slip case — so you can re-create in your hands the phases of an eclipse. A mint Total Eclipse of the Sun Forever® stamp is included in a mount affixed to the inside of the folio. Buy it here.

information about the Total Eclipse of the Sun Forever® stamp, courtesy of USPS.com

About the art director / designer:

Antonio Alcalá graduated from Yale University with a BA in history and from the Yale School of Art with an MFA in graphic design. After working as a book designer and freelance graphic designer, Antonio opened Studio A in 1988. Since then, Studio A has won awards of excellence from major design institutions including AIGA, Print, Communication Arts and Graphis. Antonio is an adjunct faculty member of the Corcoran College of Art + Design and a past president of the Art Directors Club of Metropolitan Washington. He is also responsible for the design of US postage stamps as an art director for the United States Postal Service. Antonio’s work and contributions to the field of graphic design were recognized with his selection as the 2008 AIGA Fellow, Washington DC. In 2011, he was nominated for two National Design Awards from the Cooper-Hewitt Museum. His work is represented in the Smithsonian Institution National Postal Museum, AIGA Design Archives, and the Library of Congress Permanent Collection of Graphic Design.