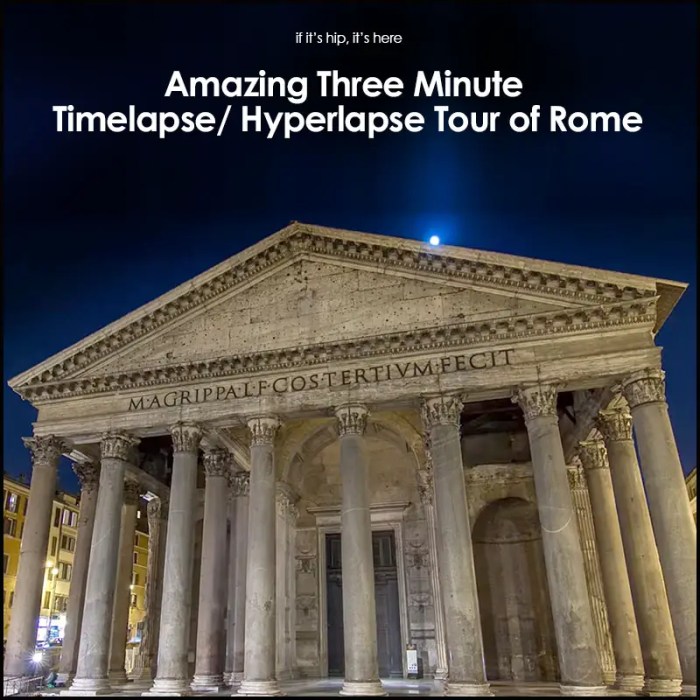 At this moment, I have a good friend who’s traveling in Rome. His shared photos on social media have been giving me the urge to get on a plane. Then he posted this. A cleverly-edited timelapse and hyperlapse video from Ukrainian photographer Kirill Neiezhmakov that takes you on an incredible walking tour through beautiful, historical and quirky Rome in less than three minutes. Now I really want to go.

In under three minutes, this new timelapse and hyperlapse video from photographer Kirill Neiezhmakov weaves you through Rome, its most famous landmarks, its historic past, tourist shops, scenic spots and more.

The Vatican, the Colosseum, the Trevi Fountain, the Spanish Steps, and the Sistine Chapel are only a few of the fabulous places in this mind-blowing visual tour.

The hyperlapse/timelapse creation was shot using two Canon 60D DSLR cameras and a Canon 70D and the following software: Adobe After Effects, Lightroom and LRTimelapse

Kirill’s own description of the video:
Rome is the capital of Italy, and its largest city. The mixture of the modern city and the plethora of monuments, piazzas, villas, museums, churches, Egyptian obelisks, along with the Colosseum, the Forum and Vatican City results in an epic, glorious ambience that will have you hooked and anticipating your next visit.

The early history of Rome is legendary. According to tradition, the city was founded by Romulus, the twin of Remus. The twins decided to build a city, but in an argument Romulus killed Remus and established the city and named it after himself.

Rome is synonymous with history. Where else can you walk in the same footsteps as the Caesars, St Peter, the Popes, Michelangelo, Dante, Raphael to name but a few? Rome also served as the capital city of the Roman Kingdom, the Roman Republic and the Roman Empire.

The “Eternal City” of Rome is the largest open-air museum in all of Europe with dozens of must-see, photogenic sites.

The real charm of Rome is that you can easily walk to most sites. For example, after a mid-morning tour of the impressive Pantheon, one could stroll through Piazza Navona, enjoy a gelato in Campo De Fiori, then walk across the historic Ponte Sisto Bridge into Trastevere – Rome’s oldest neighborhood – for an enjoyable lunch. Total miles walked? Less than three!

From Trastevere, it’s only a 20-minute walk along the Tiber to the Vatican. After a tour of Saint Peter’s Basilica, another short walk to Castel St. Angelo, where the best views of Rome are found atop that impressive castle.

As you can see, Rome is a walkable city, and by walking you get a real feel for the ambiance of Rome and the Italian way of life. Good, free walking maps are available all over the city, so hit the cobblestones.

Italy was certainly influenced by many powerful cultures and political forces over time, including the Byzantines, Etruscans and Greeks, but it was the world-changing impact of both the Roman civilization and the Italian Renaissance that contributed most-significantly to its status in the modern world. – Kirill Neiezhmakov

Timelapse/Hyperlapse Professional Photographer Kirill Neiezhmakov has a series of these amazing city tours for you to admire (his latest is Prague!)

Neiezhmakov has an enormous collection of timelapse and hyperlapse footage from several countries you can license here at videoblocks and Rome, Italy specific footage you can purchase/license here.

Your Own Photos or Artwork Printed On Adidas ZX Flux With A Phone App.