` Pink Floyd Gives OK to Anti-Trump Flying Pigs - If It's Hip, It's Here
Skip to content Roger Waters of Pink Floyd has given his approval to architecture and design firm New World Design (NWD). to go ahead with their Anti-Trump Flying Pigs Installation which will block the view of the gold lettered TRUMP sign on Chicago’s Trump Tower. 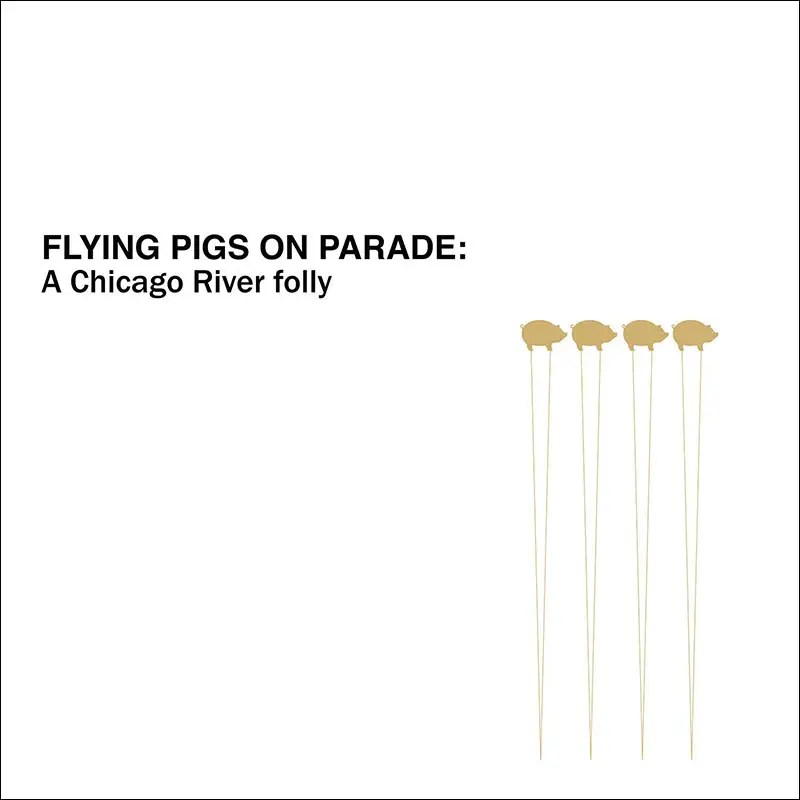 “Flying Pigs on Parade” is a visual response from New World Design to, in their own words, “the loud, illogical and frequently hateful expressions that polluted the presidential elections and that now define the actions of our U.S. leadership.”

The band’s co-founder is permitting the group to replicate the original iconic Battersea pig, seen on the cover of Pink Floyd’s hit album Animals.

They needed permission from Roger Waters because he designed the original blow-up animal, nicknamed Algie, that was famously flown above Battersea Power Station in London in 1976 for a photo-shoot for the cover of the band’s album, Animals. However, the 40 ft pig caused disruption to flights from Heathrow airport when it broke free during the photo-shoot and blew off into the sky. It was later recovered from a field in Kent. 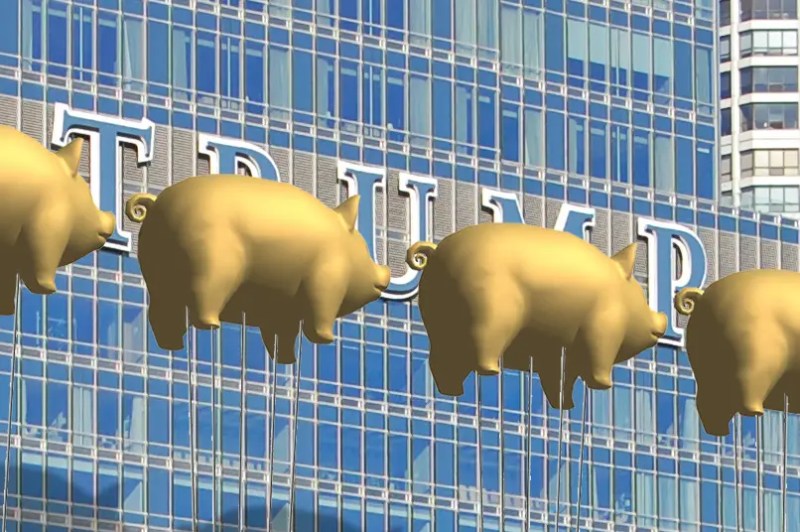 The November 2016 proposal for the project outlines the specifics:
Flying Pigs on Parade – a Chicago River folly by New World Design Ltd.

Comprised of four gold colored balloon pigs tethered to buoys in the Chicago River, the folly is a design effort by NWD to provide visual relief to the citizens of Chicago by interrupting the view of the ostentatious Trump Tower Chicago sign. The design scheme follows rigorous rationale in providing layers of meaning while allowing for nuanced interpretations by viewers. The folly is intended to be moored in the Chicago River just south of 401 N Wabash (Trump Tower Chicago). As the designers, our intent sought to interject the following representations:

• The “TRUMP” sign – The 20’ tall sign has been contentious since it was installed in 2014. Trump has rejected removal or modifications, so the folly provides a partial blockage of the sign’s visual noise.

• Inflatable pigs – The giant inflatable pigs are a homage to Pink Floyd’s, Animals album. We encourage folly viewers to listen and make their own interpretations.

• Gold colored pigs – A commentary on the gaudy style of Mr. Trump’s own gold ensconced penthouse interior he has labeled “comfortable modernism.”

• Number of pigs – There is one pig for each of the four years the world will need to endure the Trump presidency.

• Direction of the pigs – The pigs are flying eastward toward Washington, D.C.

Flying Pigs on Parade is intended to first deploy in Chicago as a single day art installation, but since the firm invested in the four 30′ by 15′ pig balloons, which will be tethered to a barge in the Chicago River for their first appearance, NWD intends to deploy the installation in other cities.

The following text is from NWD:
One hundred years ago the Russian Revolution launched a series of events that would drastically alter the world. George Orwell used these events as the basis for his 1946 novella Animal Farm. The poignancy of the text has reverberated with many generations. We feel the message, once again, seems sadly relevant.

In 1977 Pink Floyd rendered their musical interpretation of the allegory into the concept album Animals in response to social-political conditions in late-70’s Britain. Like Orwell’s book, the interpretive messages of Animals have unfortunately become highly relevant again.

We have taken the next step by designing a visual interpretation of Animal Farm. The art folly has been created to provide visual relief to the citizens of Chicago by interrupting the view of the ostentatious Trump Tower Chicago sign. The design follows rigorous rationale in providing layers of meaning but ultimately allows for interpretation by individual viewers.

The design scheme is composed of four gold colored helium balloon pigs (who have the names Old Major, Napoleon, Squealer and Minimus) tethered in the Chicago River. The references are many, from flying pigs and Miss Piggy comments to a taste for gold embellished interiors. Ultimately, this is a very rational design and is in direct contrast to the chaotic nature and bizarre antics of our current leadership.

Although securing the rights from Waters to the pig imagery is the first step in bringing Flying Pigs on Parade to life, the project still faces several roadblocks. It will need city approval, and since the cost is exorbitant, they are asking for donations as well as selling T-Shirts to help complete the installation. These exclusive shirts are an in-house design created to help NWD raise funds to implement the project. The front graphic is representative of the project design. The message on the back is simple, clear and displayed in the same font as the cover of the first edition of Animal Farm (Franklin Gothic). The shirts are printed in America on American made shirts. Please allow 2-3 weeks. Order the Folly T-shirt here.

Help Make It Happen
The costs associated with a unique event of this caliber are substantial. Floating four 30′ x 15′ balloons in an urban river canyon is technically challenging. Balloon fabrication, technical specialists, barge rental, rigging, prep costs, security, permitting fees, insurance, taxes, etc, will add up to a substantial sum. As this project is an extension of NWD’s business, they do not possess “not-for-profit” status. So they are seeking donations which will be designated to this project or be donated to charity. They will provide periodic financial data on their blog in order to be as transparent as possible.

Should administrative requirements or finances prevent the project from going forward, all residual collected funds will pass to charity.

About New World Design:
We are designers creating visual commentary on the ridiculous nature of our current political environment. We are not radicals or activists. We see design as our path to reinforcing a sensible community. The project is a bold visual response to the loud, illogical and frequently hateful expressions that engulfed the elections and now define the activities of U.S. leadership. We see this folly as a gesture in support of those of more rational, optimistic and inclusive minds. We are proud and rational Americans.

Demand truth and decency from government.