` Patrick Martinez Cake Sculptures of Rappers - If It's Hip, It's Here
Skip to content Raised in Los Angeles, Martinez, who is part Filipino, Mexican, and Native American works in several different mediums: neon, paint, sculpture, silkscreen and more. But all of his work reflects life as he sees it around him – influenced by hip-hop culture, graffiti and social injustice.

Martinez, who received a BA in fine art at the Art Center College of Design in Pasadena (my own alma mater), brings beauty and an underlying social commentary to things often perceived as ordinary: store windows, neon signage, plates of food, pee chee folders (I am proud to own his original 2005  “Po-Lice” silkscreen print) and birthday cakes.

Today, I want to share with you his cake sculptures. Ornate homages to rappers and childhood friends, they resemble the sugary sheet cakes you find in supermarket bakeries.

His “25 and still alive” cakes feature childhood friends of the artist. “These guys have lived their life on the edge and they’re still here,” he told Crave magazine. “They’re growing up now and becoming responsible and trying to figure things out, navigate life.”

The realistic cakes look good enough to eat and the missing corner pieces on some give us a peek at the enticing insides. The juxtaposition of his friends’ portraits, which have a mug-shot appearance with the brightly colored delicate and floral frosting and the scalloped edge reflective gold platter upon which they sit, make the pieces that much more compelling. 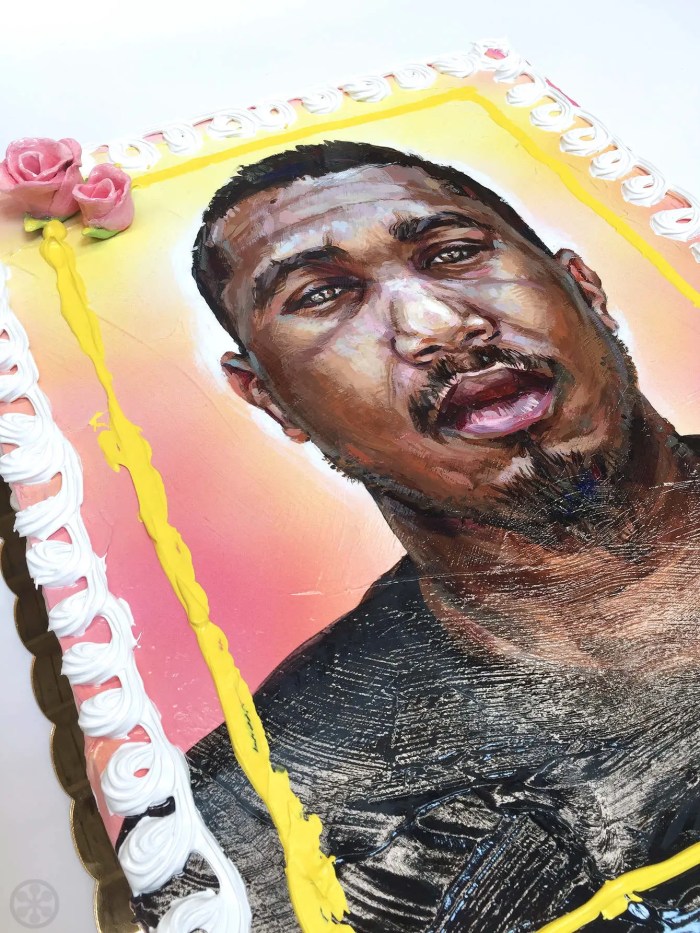 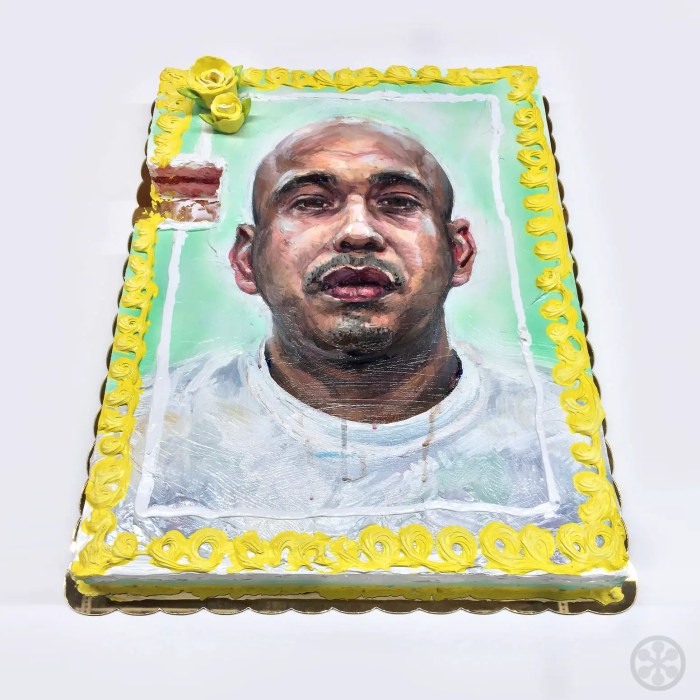 His homages to rap artist Kendrick Lamar and the late Tupac bid them a Happy Birthday, their portraits surrounded by frosting rosettes and lickable-looking edges in celebration. 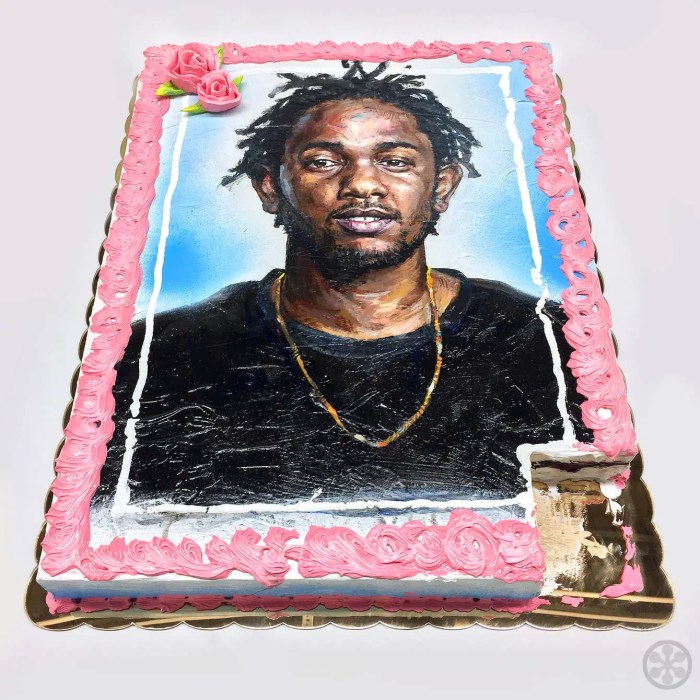 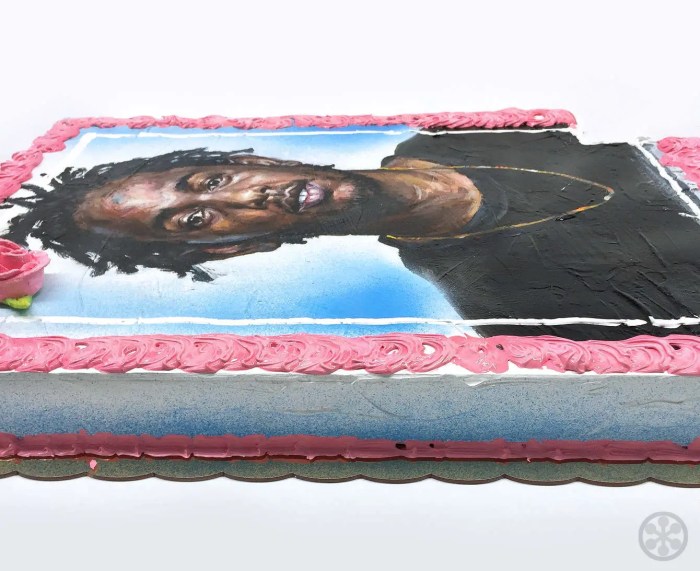 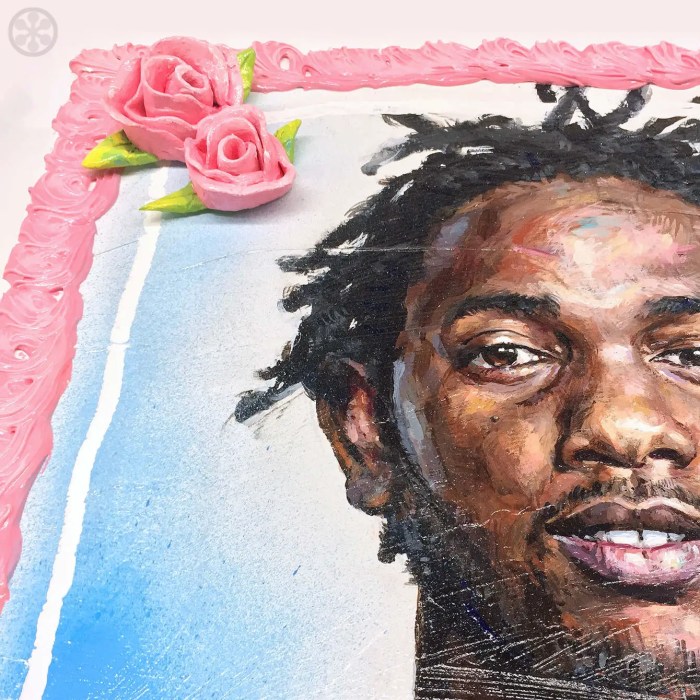 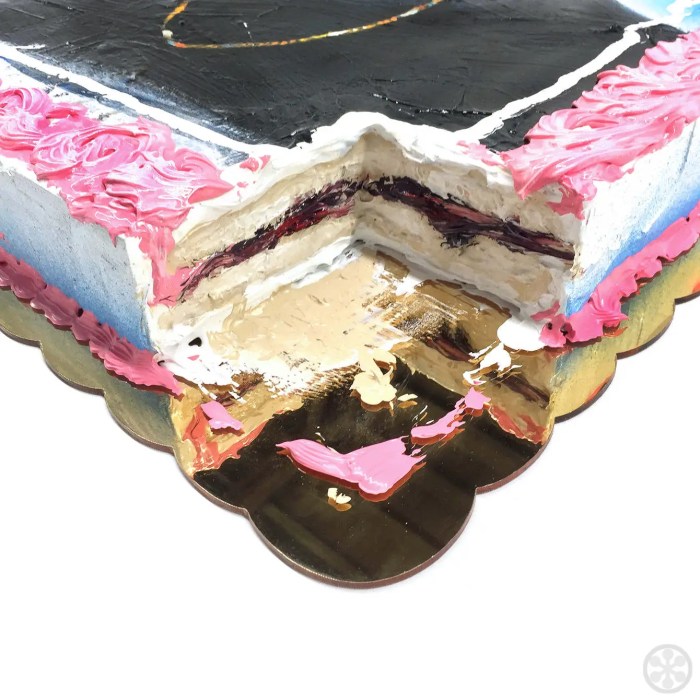 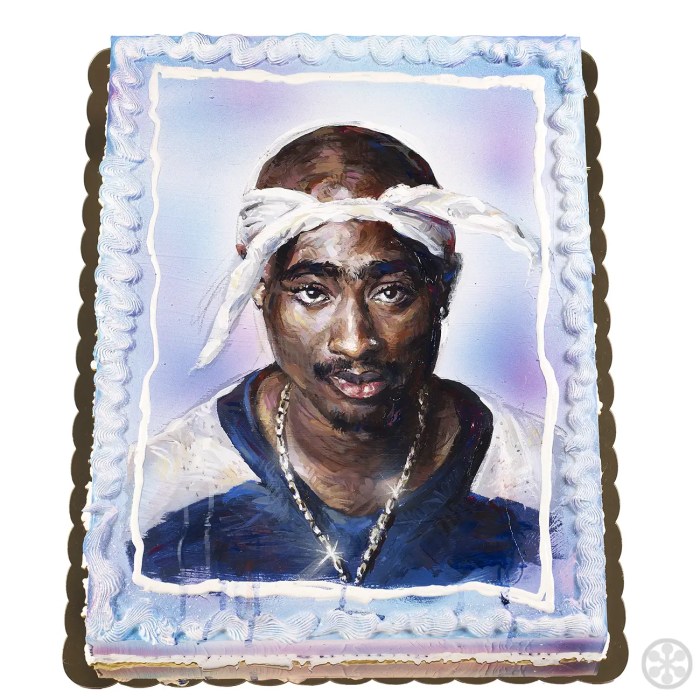 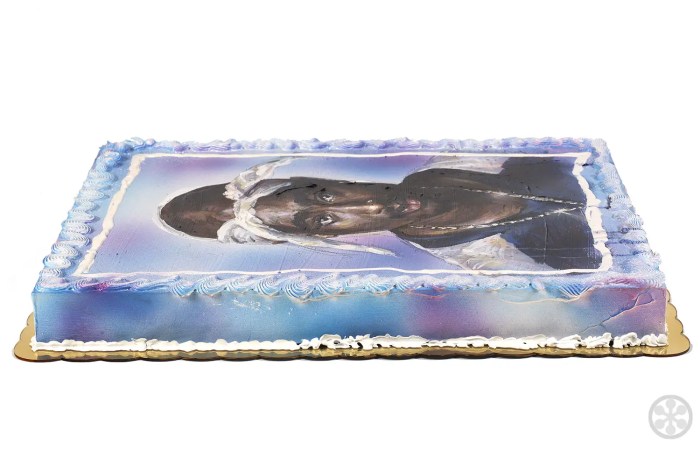 Earlier in his career, Martinez painted \”happy birthday my nig\” (shown below) using mixed media, puffy paint and cake frosting on panel 2009. Clearly this was the start of a series that has evolved as the artist’s own perception and craft has. 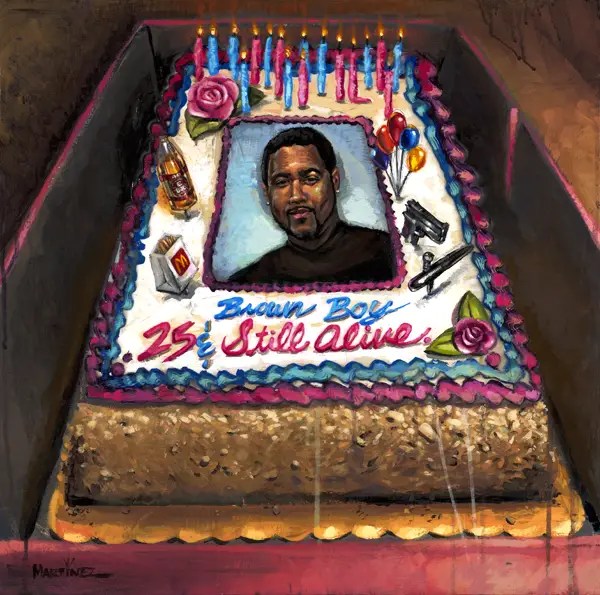 Since the vivid days of Patrick’s childhood he was always drawing or scribbling on something. In his teenage years circa early 90’s, he was introduced to Hip Hop culture and exclusively to one of its elements, graffiti. Graffiti remains an influence in his work. Hip Hop has influenced his art ever since he understood what it was about, movies like “Wild Style” and “Style Wars” turned him onto the Hip Hop movement in his earlier days. In 1994 he attended Pasadena High School Visual Arts and Design Academy where he learned and practiced his image making skills.

Patrick graduated high school and moved on to Pasadena City College. Patrick spent three years at PCC experimenting, developing his artistic skills and trying to find a hint of himself at the same time. He kept a steady career doing illustrations and design work mainly for underground and mainstream record labels that catered to the Hip Hop community. In 2001 he was ready to take on the next stage of art discipline. This led him to apply to Art Center College of Design in Pasadena, where he received a bachelor of fine arts.

Patrick focuses on the phenomenology of his surroundings. He brings sublime beauty to things that aren’t thought of as conventionally beautiful. He uses subject matter such as everyday people that aren’t usually painted into the limelight and elements of the city that would be thought of as objects we take for granted. He uses these objects as communicative mediums. Patrick works with intellect and intuition in creating pieces of art that reflect and document situations that are ever present around him. Vitality and rhythm are the essence and energy in his artwork.

images courtesy of the artist

More great sculpture can be found on our Sculpture and 3D Art Pinterest board:

Bookends of the Earth. Hand Crafted Sculptural Micrososms of The Planet.

Devil’s Due Turns AOC into a Comic Book Superhero