Born to German parents in El Salvador, artist Nina Nolte, has had a fascination with water since childhood. In her series of acrylic paintings, The Best Is Yet To Come, water is represented as a social sanctuary for glamorous middle-aged women and their friends.

Nolte’s large pop art style paintings harken back to the days of 1940s glamour. This series depicts a relaxed elegance; women wearing turbans, donning sunglasses and cocktails as they luxuriate and converse in swimming pools and spa pools.

The women are occupied with themselves, unaware of an audience, and do not confront the viewer. Instead we are voyeurs watching as they indulge themselves and their friendships. The cigarettes, lipstick, sunglasses and cocktails tell us that these women are relaxing and socializing without fear of judgement in their own little private sanctuaries.

Nina uses photographs of her subjects to paint from and manages to retain the realism, yet stylizes the works with color and light.

The play of light on the water and the subtle differences between the submerged and exposed parts of the figures are examples of how deftly Nina handles liquid as a subject and as an effect. The patterns and deep colors of the textiles (turbans and swimsuits), are striking when juxtaposed against the pale flesh and bright blue cool pool water.

The earliest paintings of these women are the following two: In The Bath and In The Bath II, painted in 2008:

If looking at these paintings chronologically (as I am showing them), you can see the evolution of her skill and how the depiction of the textiles and the womens’ flesh changes over time in her 2009-2012 series The Best Is Yet To Come.

Even in my childhood, which I spent in Barcelona, ​​the water exerted a great fascination on me. With our boat we often sailed along the Costa Brava during the summer holidays. I experienced the medium of water not only on the boat but also snorkeling in the bays when our boat was moored.

My particular closeness to this medium is always animated by these commissioned works, in which I am portraying famlies or individual members under water. In contrast to traditional portraits, I am fascinated by the play of the light reflexes and the natural alienation of the figure of the picture-jets. Through the medium of water, the genre of portraits attains an artistic degree of abstraction, which leads the image to a new level and gives it a contemporary character. – Nina Nolte

Some art critics see this series very differently. For example Galerie Angelika Blaeser describes her work as follows: “Nina Noltes’s work is a form of criticism of society. Thus, the beautifully colored paintings of the series “The Best Is Yet To Come” show blown, dissatisfied, over-saturated women of rich men who know nothing else to catch with their time, than to sit at the pool or to take care of themselves. They do not communicate or hardly communicate with each other, seem lonely, appear somewhat old-fashioned in their decor.” (source).

She sells Textile Art Prints of some of her works (printed on canvas) like those shown below. You can purchase those here 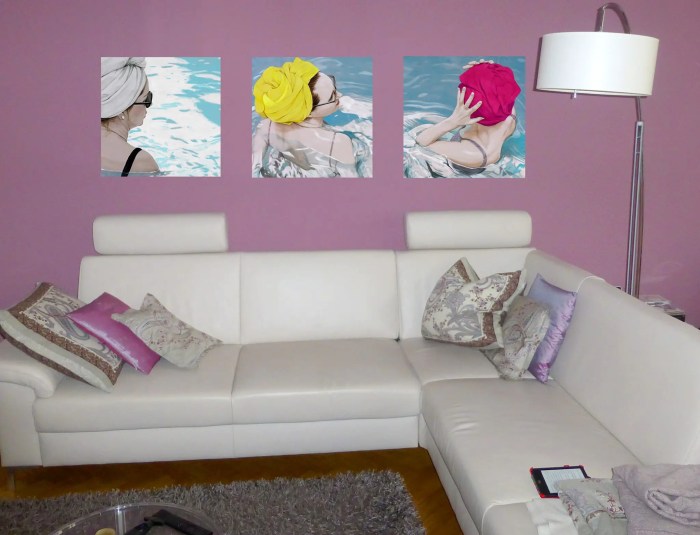 Prior to this series, Nina had painted Pool Paintings from 2007-2009, which consist of children frolicking in and under the water.

If you happen to live in the Berlin area, Nina has just opened a pop-up art lounge in the BIKINI BERLIN Concept Shopping Mall.

You can enjoy delicious cake, pastries and beverages provided by EINSTEIN KAFFEE while studying the art works. Go check it out!

images courtesy of the artist  Art Doxa and Kunstmatrix