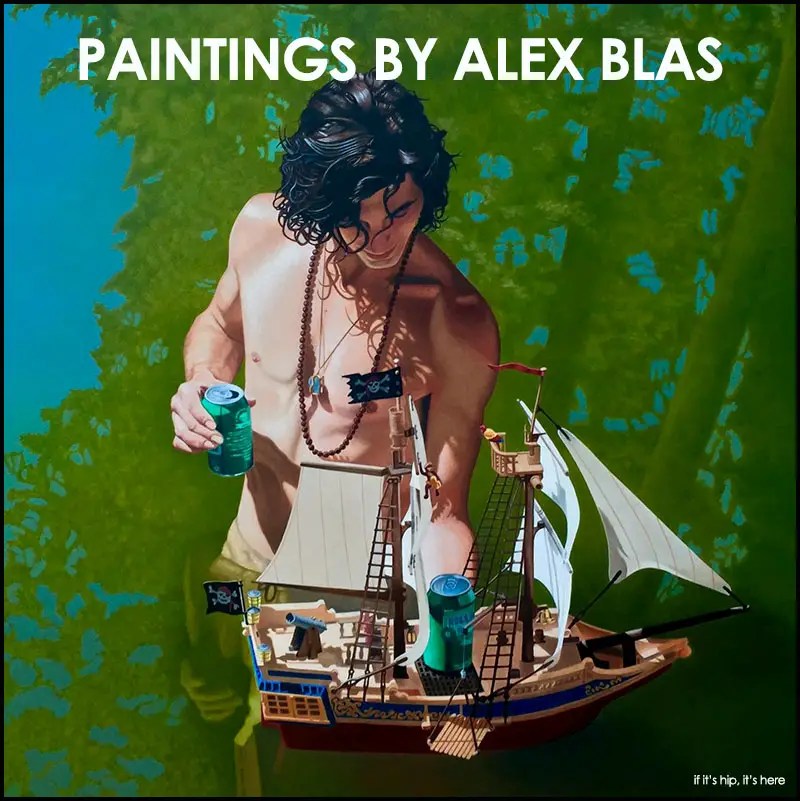 I just recently learned of fashion designer Alex Blas’ paintings. I had no idea he was a figurative painter in addition to designing high-end fashions for both people and Barbie dolls or almost a decade now. But he is. And one whose work you ought to see.

You see, Alex is well-known among Barbie collectors and enthusiasts for his dressing the well-known Mattel dolls in fashions of his own designs which he then turns into exhibits, installations and youtube videos.

I could easily write an entire post on the last seven seasons of fashions he created for the dolls, but with an upcoming solo show this fall, his fourth, at the George Billis Gallery in Los Angeles, it’s the perfect time to introduce you to his photo realistic paintings.

Privacy and personal space are central themes in the works of painter Alex Blas. His most recent series ‘Housesitter’ is inspired by the artist’s real experience with a housesitter who, under the guise of trust, began using Blas’ home in his own self-interest. Toned by deep shadows and bathed in the reflected light of Southern California, the paintings turn the tables like a hidden camera, spying on the housesitter and finding him in moments of indiscretion and gratification. Here the gaze of the subject, his focus, his hands, his pose, are the details that expose his hesitance, and possibly even recognition, that he’s breaking the rules. The artist’s ability to transpose the perspective to a fly-on-the-wall witness, in such delicate and provocative detail, immortalize the discovery of online photos that inspired the series like uncomfortable, sensual truths frozen in time. – Jake Kale

Alex Blas was born in 1978 in Mexico City, emigrated to the United States in 1988 and received his degree in 1999 from Santa Ana College. His work has been shown at the Lyons Weir Gallery, New York, and the George Billis Gallery, Los Angeles, as well as Manifest Equality (Los Angeles) and at Legends of La Cienega, sponsored by Elle Décor magazine. He currently lives and works in Los Angeles and curates Artwerq at the Downtown LA Artwalk monthly.

Pencil vs Camera by Ben Heine