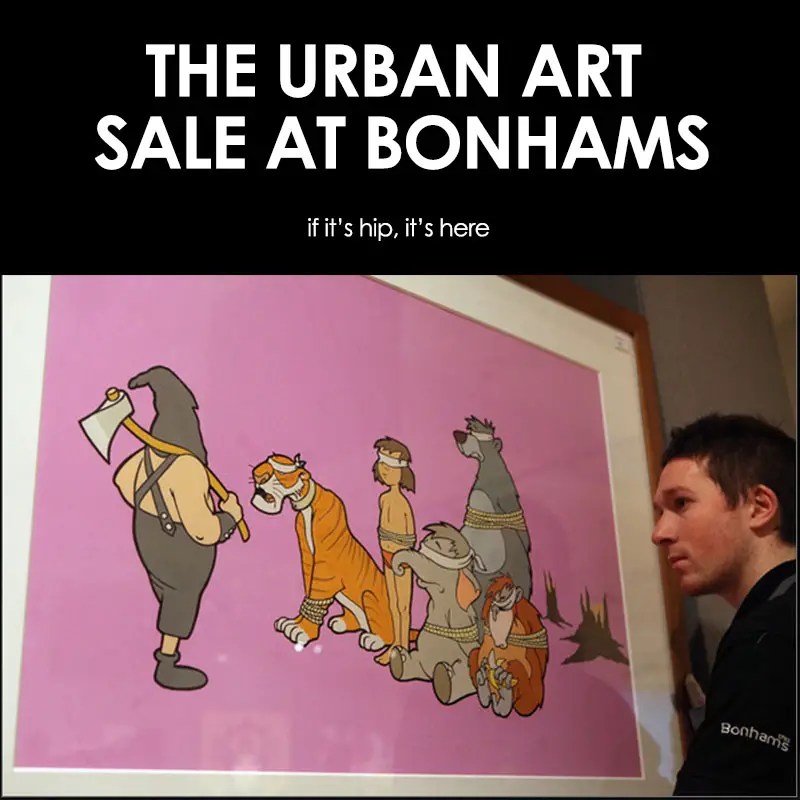 Below is an article I found about graffiti art from the UK Sunday Times by Lindsay Baker. I’ve followed it with an update on the results from The Urban Art sale at Bonhams, auction house Bonham’s first ever auction devoted to Street Art, as well as with images and captions. How Banksy made graffiti popular with Angelina Jolie and Brad Pitt
Banksy’s works now fetch six-figure sums – how did graffiti art get so mainstream?

It has that elusive cred factor, is endorsed by the likes of Brangelina, and fetches dizzying prices – there’s no mistaking the frenzy surrounding graffiti art. Still, a few eyebrows were no doubt raised at Bonhams auctioneers when it decided to host a sale of the phenomenon known as urban art. After all, this kind of work in its purest form (on the street rather than on canvas) is illegal.

Some examples of Banky’s Street Art: However, Gareth Williams, a senior specialist in urban art at Bonhams, says its outsider status – with many of its practitioners, such as Banksy, anonymous – only adds kudos, and value. “Everyone loves a rebel, and their mystique only adds to the attraction.” above: Angelina Jolie purchased Banksy’s white bust with a bleeding bullet hole in the forehead, at a cost of £40,000 last September.

The sale includes work by the graffiti-art pioneer Keith Haring, as well as recent artists such as Paul Insect and Faile. “Their work is more accessible than some conceptual art,” says Williams. “And these artists share a political edge and a wry sense of humour, which appeals to a new generation of collectors.” above: a painting by Keith Haring

Darius Grant, the collector and Wall Street hedge-funder who owns work by the 1980s New York legend Jean-Michel Basquiat, has noticed a growing interest in urban art among his peers. “If you work in this world, you probably like taking risks, but you’re still part of the Establishment – it’s quite conservative. You can’t rebel at work, but you can buy rebellious art that’s shocking or subversive.” This is good news for the artists – and not just in terms of sales. Those with suitable street cred are increasingly in demand in commercial spheres. Take Inkie, who made his name on the innovative Bristol scene, along with Banksy, 3D and Nick Walker. above: Moona Lisa by Nick Walker

Besides his private commissions, Inkie is now head of graphics at the computer-games company Sega. He also has his own T-shirt label, Flying Eyeball. At 37, Inkie, like many on the scene, has had run-ins with the law over the years, but these days, he is based in London and no longer does anything “naughty”, as he puts it: “I’m too old, and I’ve got a job and a kid now.”

Is there a danger that commercial interest will force compromises? “It’s become a lot bigger than I imagined it would,” Inkie admits. “It does make me laugh when design agencies say they want ‘Banksy-style’ graphics.”

The urban-art ethos has always been about “reclaiming” public space, or “taking what’s ours”, as Inkie puts it – and you could argue that that’s exactly what these artists are doing now.

The Urban Art sale at Bonhams is on Tuesday; www.bonhams.co.uk

and now, some links to some cool graffiti artists:

BANKSY The king of the urban art scene and master of the guerrilla stunt. Find his work on the streets of London, Bristol and other cities around the world, most recently, Bethlehem. A Banksy-daubed wall has sold for £208,000 on eBay, with the proviso that the purchaser remove it.

PAUL INSECT A recent solo show had to be cancelled after Damien Hirst bought the lot.

ADAM NEATE Subverted the genre by painting on cardboard and canvas and hanging these in public spaces.

3D Aka Robert del Naja of Massive Attack, represented by the same management as Banksy (www.lazinc.com).

NICK WALKER Spray painting and stencils. His Moona Lisa is in the Bonhams sale.

BLEK LE RAT The veteran French artist has inspired Banksy, among others. His works are in the Bonhams sale.

And How Did The Auction Go? Here’s the latest news from the auction:
First auction of ‘street art’ kicks off in London Tuesday, Feb. 5, 2pm

LONDON (AFP) — Auction house Bonhams on Tuesday organised the first sale dedicated solely to “street art”, with works by American artist Keith Haring, and Banksy, who anonymously paints on London’s walls, on sale. “Laugh Now”, a 2002 painting by Banksy that stretches about six metres (19.7 feet) in length featuring monkeys wearing sandwich boards which read “Laugh now, but one day we’ll be in charge”, sold for 228,000 pounds (280,000 euros, 410,000 dollars), above its pre-sale estimate of up to 200,000 pounds. Another highlight of the auction was “Kate Moss”, a portrait by Banksy of the British supermodel in the style of Andy Warhol’s famous Marilyn Monroe paintings, which sold on Tuesday for 96,000 pounds, more than three times expectations. above: A series of Kate Moss paintings in the style of Andy Warhol were sold at a Sotheby’s art auction for a record £50,400 in October of 2006

“Banksy has arrived in Bond Street,” a spokesman for Bonhams told AFP, referring to the posh road where London’s auction houses are based, adding that the artist’s work had gone into the mainstream. “The result is very satisfying,” he said. Bonhams is planning more auctions of urban art in the future, he added. Last month, a wall painted on by Banksy, depicting a classical-looking artist in mostly-grey garb, sold on Internet auction website eBay for 208,100 pounds. Banksy, originally from Bristol, western England, has attracted a global following with his graffiti paintings on the walls of London buildings, and his work has been bought by actress Angelina Jolie and singer Christina Aguilera, among others.

The Coolest Coloring Books For Grown-Ups Part IV – 40 New Ones!