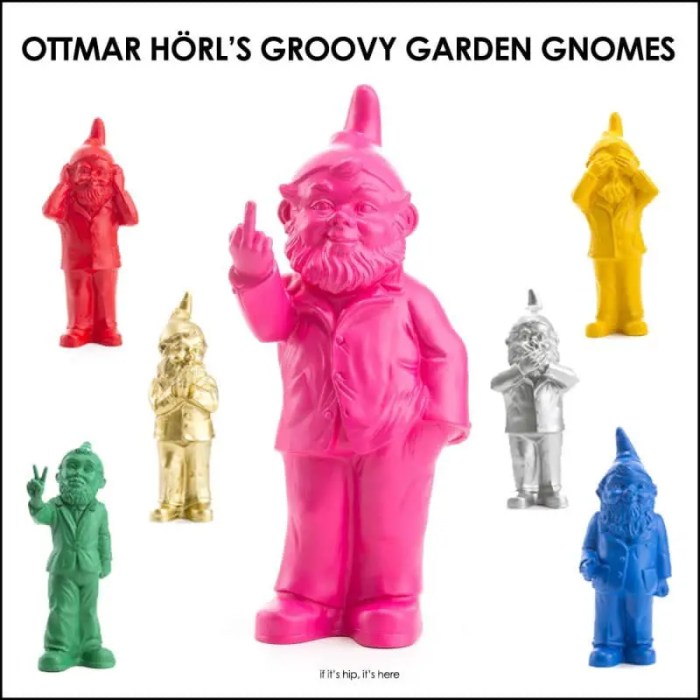 We’ve already met Baddy, a stylized garden gnome by artist JVLT, now he’s got some competition. German sculptor and artist Ottmar Hörl has his own series of quirky, colorful garden gnomes available for purchase. Closer in style to the original than Baddy, these plastic signed sculptures are doing everything from welcoming you to flipping you off.

Known for his sculptural projects and art installations which usually consist of colorful multiples, Ottmar Hörl frequently uses the gnome in his work.

He first re-imagined the garden gnome in 1985 when he attached him to the walls, head down, during his “gelb-syndrom” [yellow syndrome] exhibition at the Frankfurt AK art gallery. 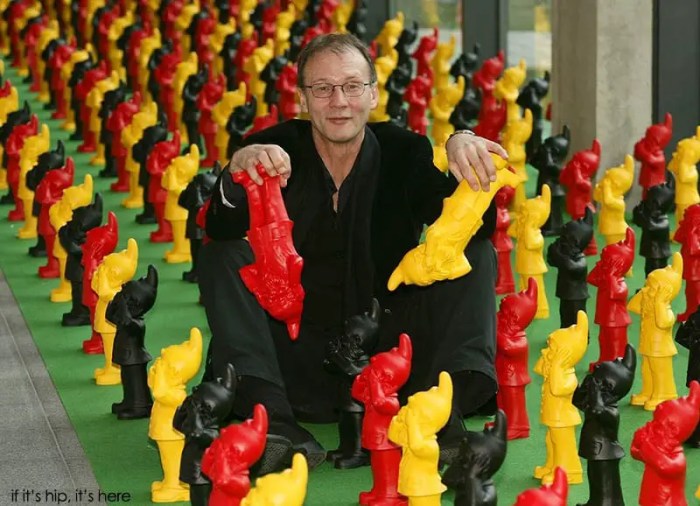 “To me, the gnome is a sociological phenomenon originating in European mythology and gaining popularity towards the end of the 19th century in the shape of the garden gnome.” – Ottmar Hörl

Since then the gnomes have made appearances in many projects by the artist, including his controversial “Poisoned” Gnome giving the Nazi Salute. Read on to see the available gnomes and the projects in which they first appeared. 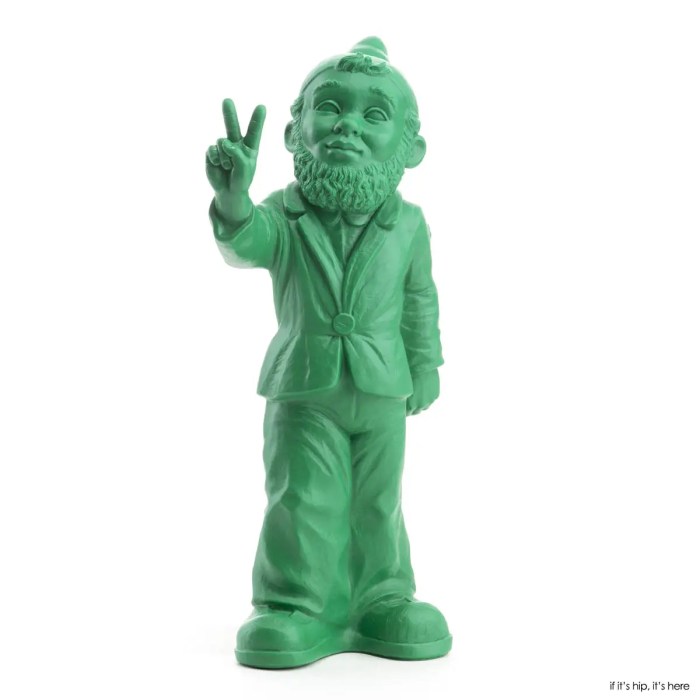 Sponti (Activist) Garden Gnome -also known as the Non-conformist Gnome:
1994 saw the conceptual occupation of a city: Seligenstadt was the venue for Ottmar Hörl’s “Rolling Change” sculptural project featuring a total of 1,000 blue garden gnomes flipping the bird and the gnome became part of an artistic concept, of communication in public spaces. Ottmar Hörl projected this adaptation in 1998 onto his large-scale sculpture with 4,000 garden gnomes in Max-Josef-Platz in Munich. 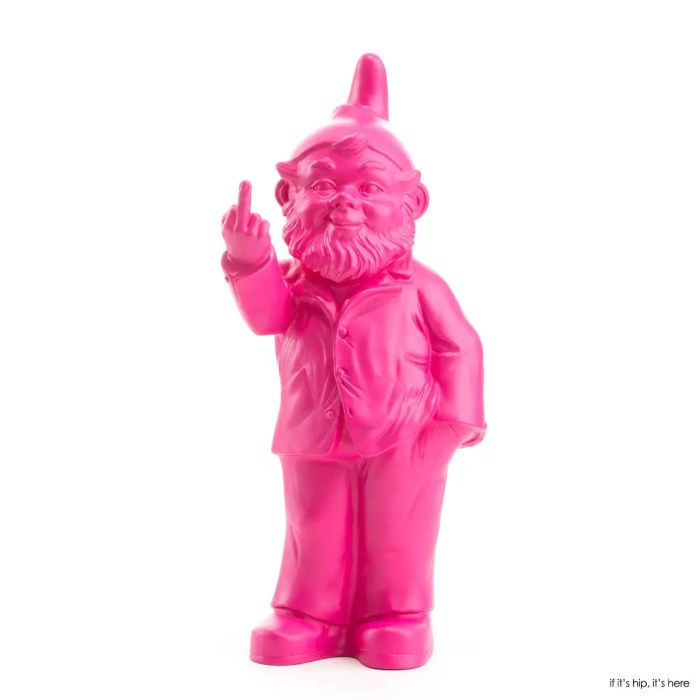 Ben, The Praying Garden Gnome:
In 2005, Ottmar Hörl reacted to the headline “Wir sind Papst” (“We are pope”) by producing Ben, the praying garden gnome. Ben symbolises prayer as a symbol of spiritual and philosophical abilities, but also as a gesture that unites society and is understood worldwide. 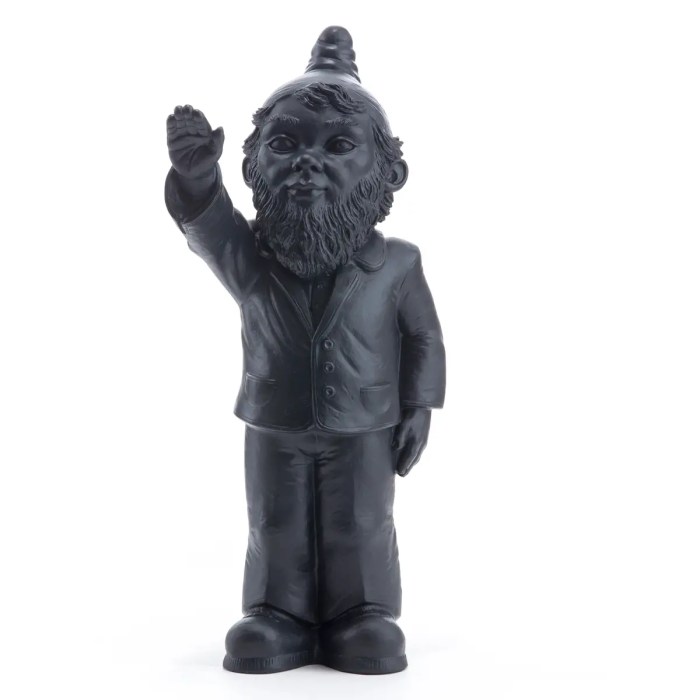 Under the title of “Dance with the Devil”, Ottmar Hörl developed in installation to “satirize the concept of the master race propagated by the Nazis”. The work was first presented in 2008, at the Lineart international art fair held in Ghent (Belgium). The foyer of the fair was populated by some 700 serial monochrome sculptures making up an army of deadpan garden gnomes raising their right arms to perform the Hitler salute. The bottom of each of the gnomes was engraved with the word “poisoned.” Bearers of Secrets (multi-coloured set), 2006
See Nothing, Hear Nothing, Say Nothing Also available in unicoloured sets:
See Nothing, Hear Nothing, Say Nothing Welcome Garden Gnome:
At the 1998 International Opera Festival, his “Welcome Gnomes” arranged around a statue of the first Bavarian King welcomed the audience. 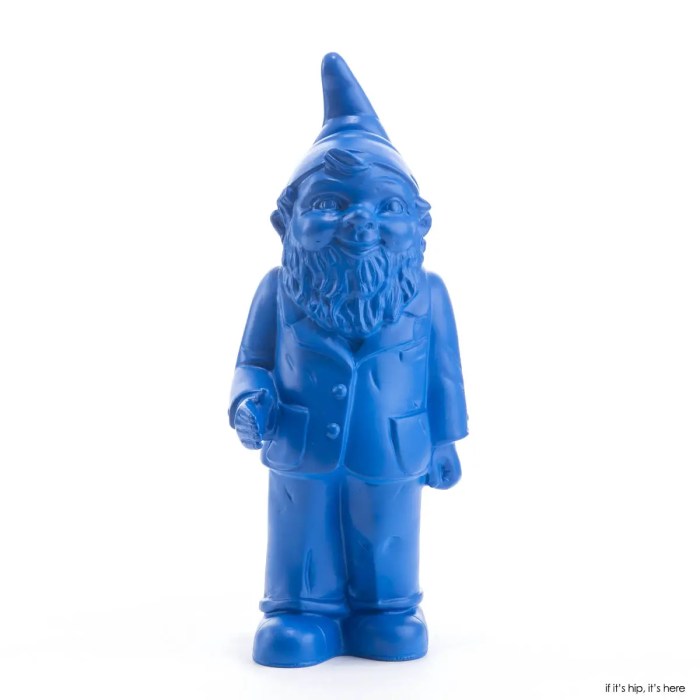 Sponti XXL
A giant version of his Sponti garden gnome. 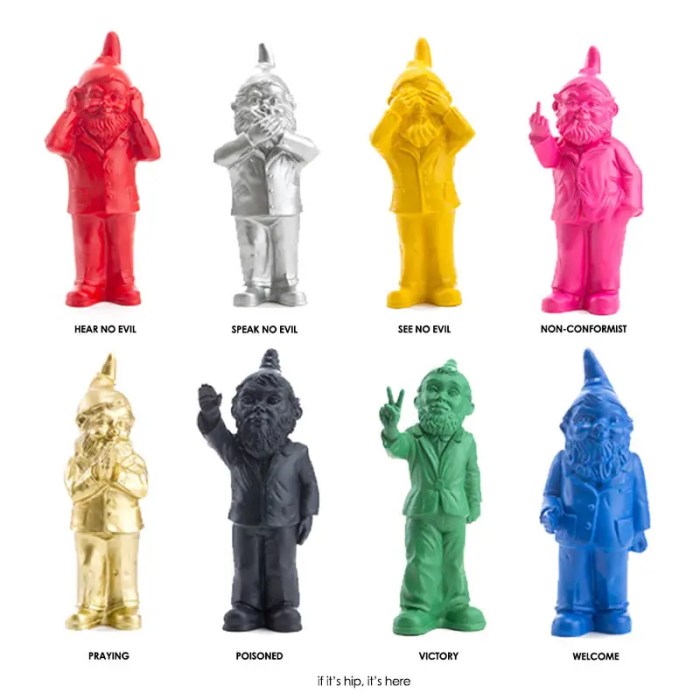 The gnomes, as well as many of his other sculptures, are available to purchase at the artist’s online shop or at sites that sell original artist multiples like Art Goodies, Worldwide Originals.