11 suits of armor, each measuring 1.6 meters tall and made of transparent glazed porcelain, flank the public area of the Provincial building in Leeuwarden.

Designed by Hans van Houwelingen in collaboration with Koninklijke Tichelaar Makkum who produced the pieces, the 11 porcelain knights were part of a triptych of works commissioned by The Province of Friesland whose common theme involves the relationship between art and politics at a time when they seem to be moving further and further apart. The project is named Mecenaat Provinsje Fryslãn. In the public area of the new Provincial building eleven suits of white porcelain armor with closed visors stand proudly on eleven consoles. Stately, conservative, self-assured and fragile, each bears the coat of arms of a Frisian town on its cuirass. A suit of armor made of porcelain is like Frisian tradition, which preserves the people but at the same time makes them vulnerable. Tradition protects, but is also society’s Achilles heel, just as porcelain can last a thousand years or be shattered by a single blow. Koninklijke Tichelaar Makkum produced the numerous components of these suits of armour. 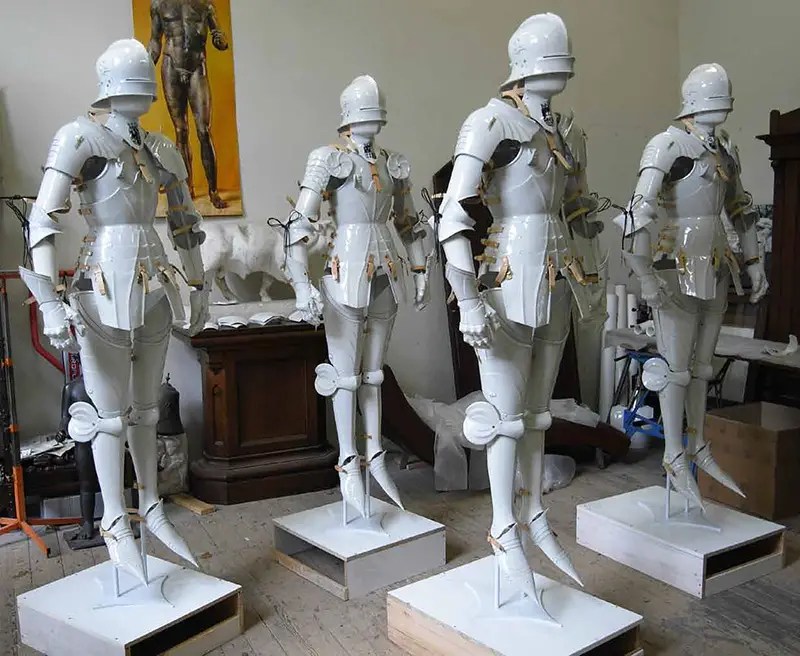 This commission has once again enabled Koninklijke Tichelaar Makkum to showcase its traditional craftsmanship and expertise in ceramics. Hans Van Houwelingen is quoted as saying “I am very impressed by Makkum’s craftsmanship.”

Creating and producing the pieces: About Hans van Houwelingen
Hans van Houwelingen (1957) was educated at the Minerva Art Academy in Groningen (Netherlands) and at the Rijksakademie van Beeldende Kunsten in Amsterdam. His work is internationally manifested in the form of interventions in public space, exhibitions, lectures and publications, in which he investigates the relations between art, politics and ideology. He has created various exhibitions and permanent installations in public spaces. He publishes regularly in newspapers and magazines. The monograph Hans Van Houwelingen VS. Public Art: Stiff

(Artimo, 2004) offers an overview of his projects and texts and an extensive reflection on his work. The publication update describes the permanent update of the Lorentzmonument in Arnhem (NL) during the exhibition Sonsbeek 2008. Hans van Houwelingen’s Undone

This Animated Short, In a Heartbeat, Opens Eyes and Minds.

Manga Meets Modern In The Work of Jessica Lichtenstein.