` Cut Paper Art by Hari and Deepti - If It's Hip, It's Here
Skip to content 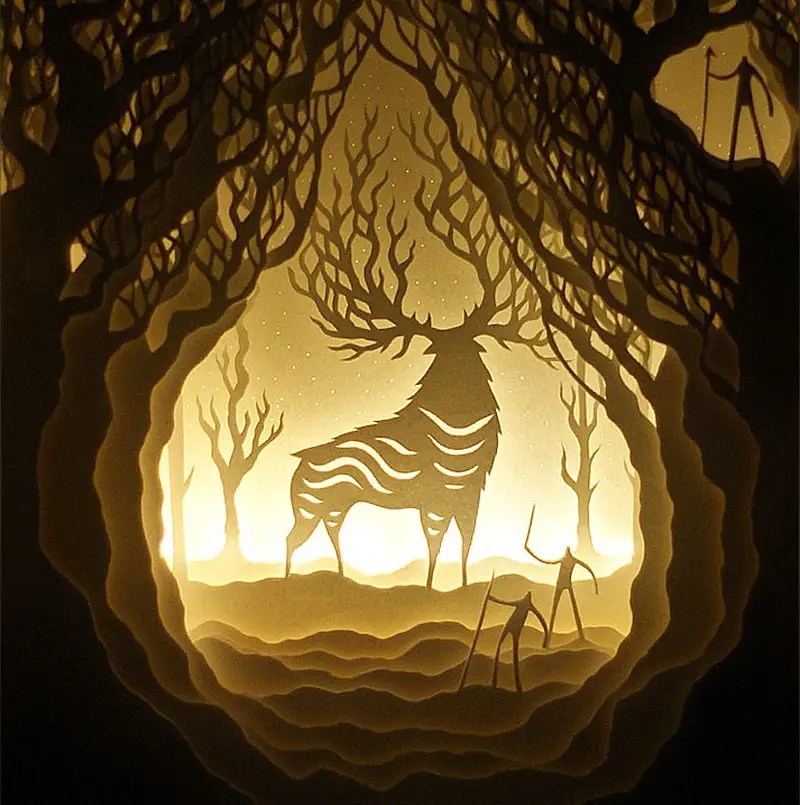 Harikrishan Panicker and Deepti Nair, who both hail from India, go by the duo artist name of Hari and Deepti. Together they create small and large diorama artworks made of intricately cut layered paper lit by LED lights.

Paper Art by Hari and Deepti

Tree of Light, unlit and lit: 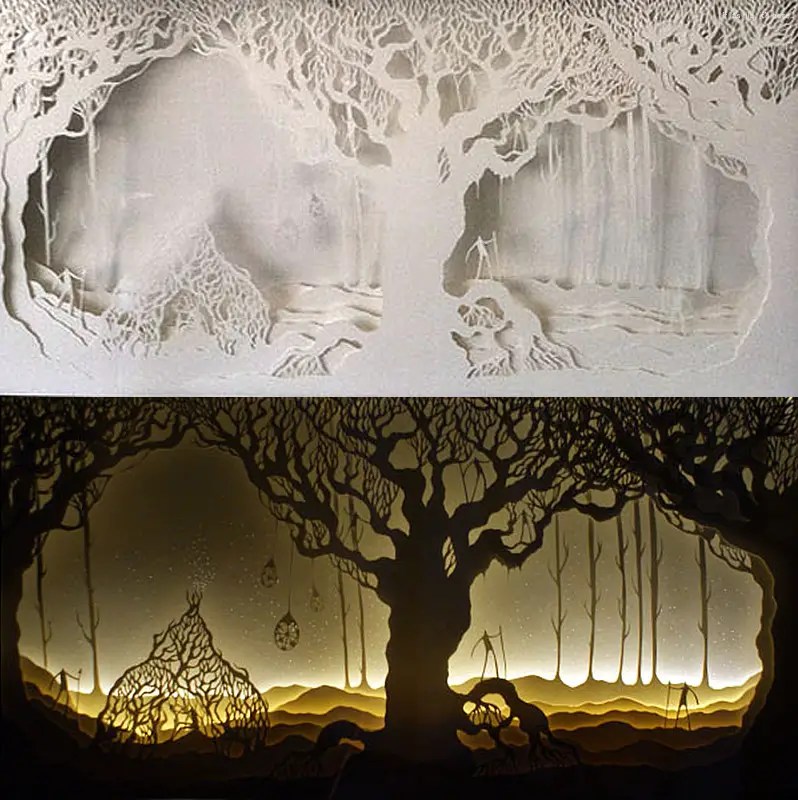 Spirit of the Forest (lit and unlit): The Protector (lit and unlit): 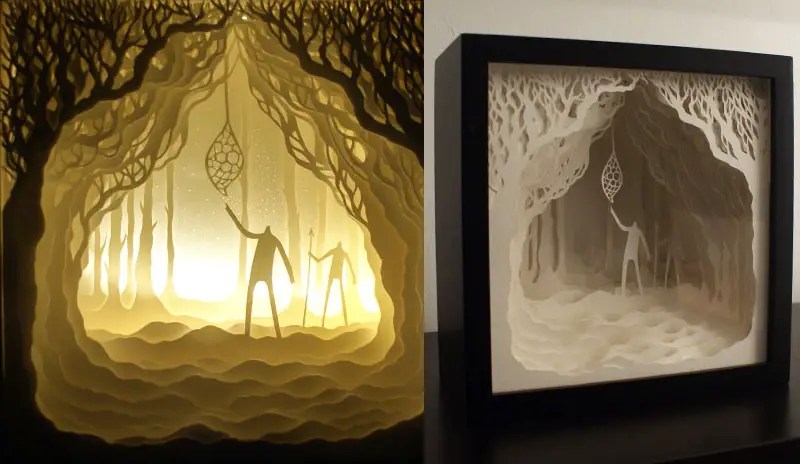 Fire Wolves and the Lone Warrior: When Life Gives You Lemons (left) and Where I Belong (right): 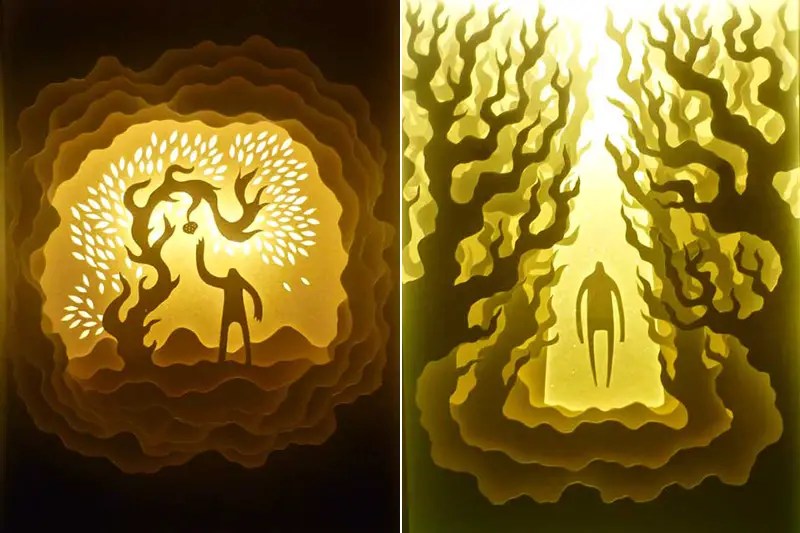 The Light in the Forest: 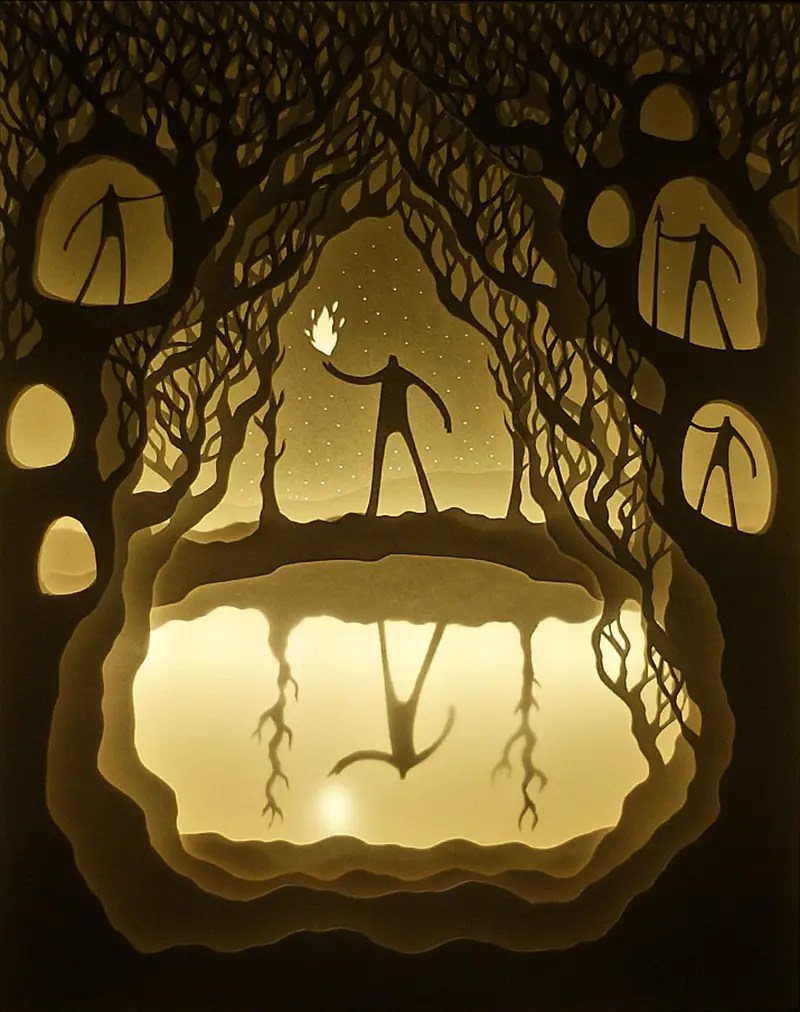 When The Dust Settles: 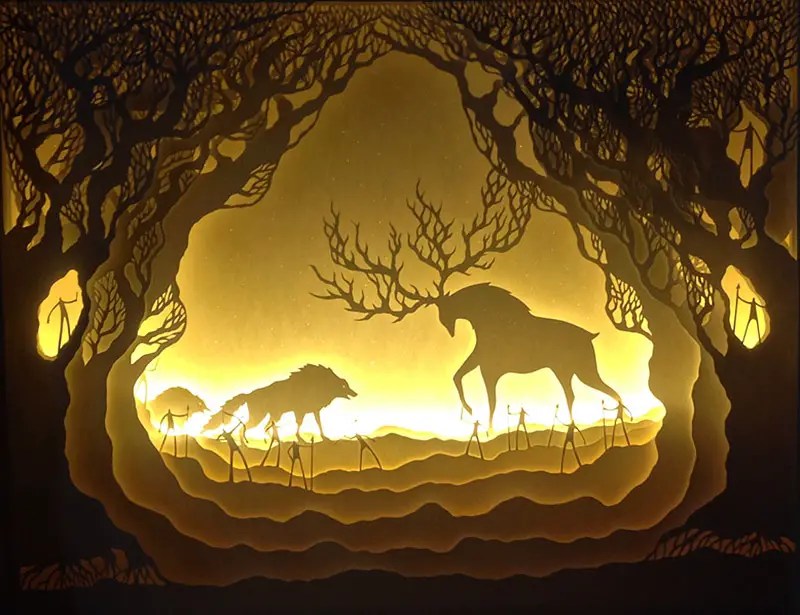 Moonlight Drowns Out All But The Brightest Stars: The Protector 3 (and detail): The Illuminated One (also shown cropped at the top of this post): 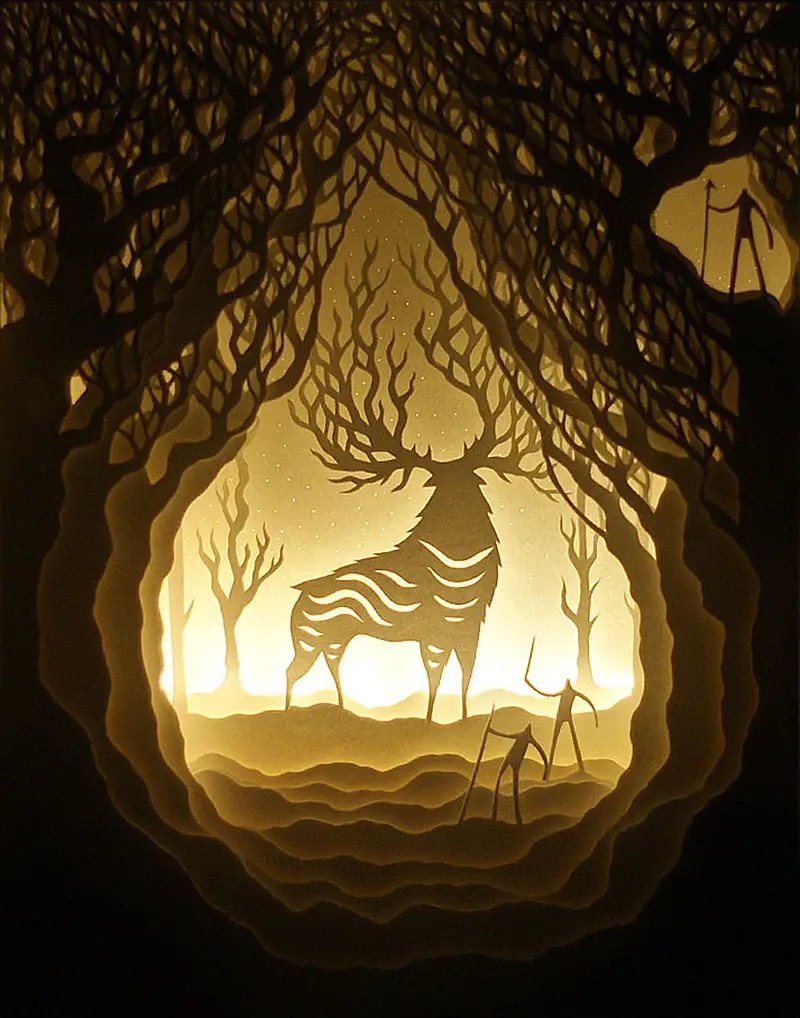 Artworks as they appear in Galleries: 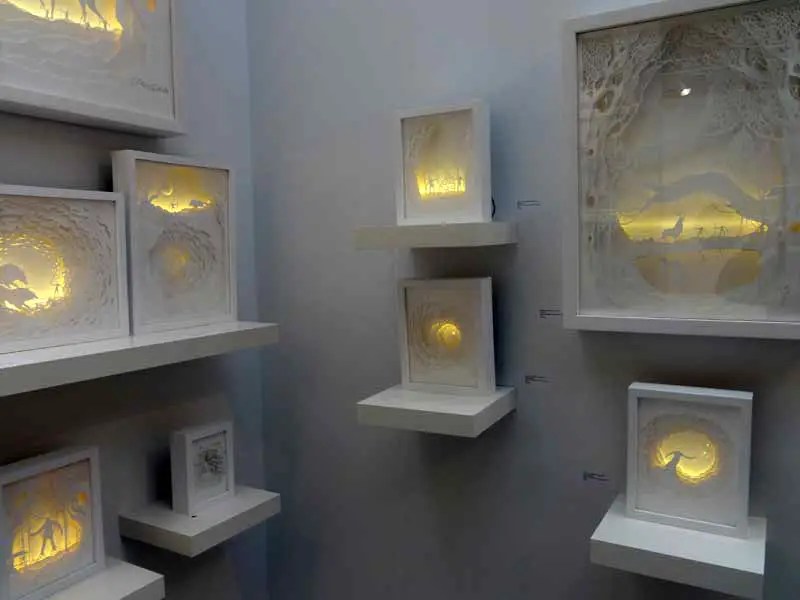 About the artists:
Hari and Deepti are an artist couple currently based out of Denver, Colorado.

Hari (whose full name is Harikrishnan Panicker) is a trained graphic designer and illustrator. He was born and raised in Mumbai, India where he was the senior designer for MTV Networks India and has designed for brands like MTV India, VH1 India, Nickelodeon & Comedy Central. Apart from designing for these brands, he is also an established illustrator and has designed album covers for musicians like Dualist Inquiry and has been invited to design a cover for Rolling Stone India for their annual – Art as Cover Edition. He loves to collect and customize vinyl toys, is obsessed with drawing monsters, loves to screen print & secretly aspires to be in space some day. He fell in love with paper cut art after seeing Balinese shadow puppets and has since been experimenting with paper and light.

Deepti Nair is a certified geek and is usually seen designing complex systems for a leading Telecom company as an Interaction Designer. “My day job helps me keep sane and makes me appreciate the time and opportunity I get to create art a lot more” says Deepti. She is a trained artist and prefers staying away from the computer to create or assist in her art. She believes that art has to be felt and experienced. She specializes in working with paper cut, acrylic and loves sculpting with clay.

Hari & Deepti moved to Denver from India and carried with them a Pandora box full of stories and imagination that they bring to life through their intricate paper cut light boxes and paper clay sculptures. They have always been drawn towards the imaginative aspect of story telling and seek inspiration from them. Stories have so many shades and depth in them, and paper as a medium has the exact qualities to reflect and interpret them. They believe that “Paper is brutal in its simplicity as a medium. It demands the attention of the artist while it provides the softness they need to mold it in to something beautiful. It is playful, light, colorless and colorful. It is minimal and intricate. It reflects light, creates depth and illusions in a way that it takes the artist through a journey with limitless possibilities.”

They started experimenting with paper cut shadow boxes in 2010 with hand painted watercolor paper which was then cut and assembled in a wooden box to create a diorama, with years of practice their art became more intricate and minimal at the same time. They started experimenting with lights and simplified their pieces by losing the colored aspect of the paper. They have since then evolved to add their own style of paper cut art incorporating back-lit light boxes using flexible LED strip lights.

“What amazes us about the paper cut light boxes is the dichotomy of the piece in its lit and unlit state, the contrast is so stark that it has this mystical effect on the viewers.”

They are constantly evolving their art with more complex representation of stories and aspects, like reflections in the water.

See more of their work here

images and info courtesy of The Black Book

The 2012 ArtPrize Winner Adonna Khare And A Close Look At Her Mural.