I first introduced you to the work of artist/photographer Suzanne Jongmans with her earlier pieces from this series in 2009. She has since continued on with the project, Mind Over Matter, in which she utilizes packing materials to emulate centuries old fashions. 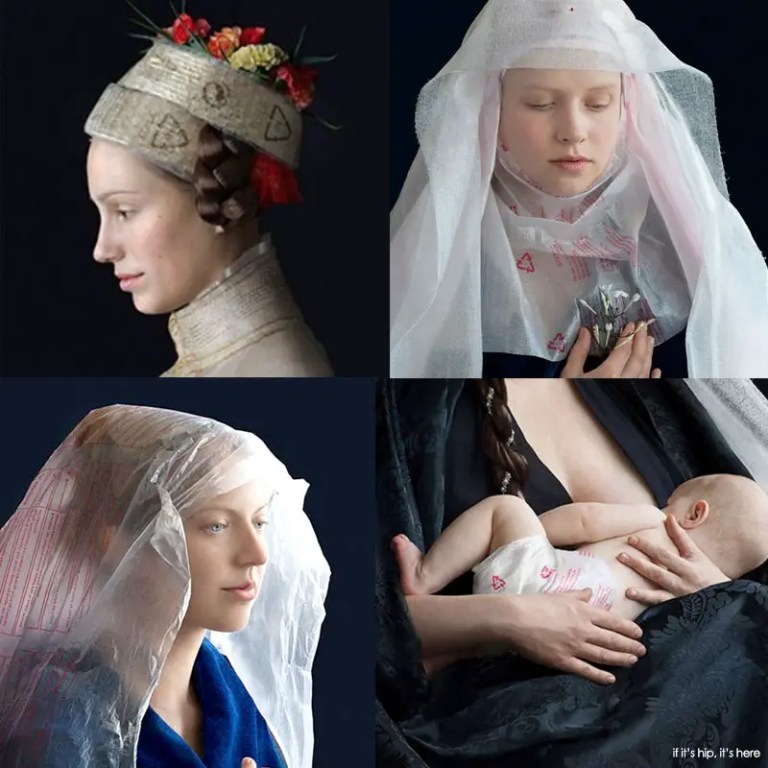 The following text is courtesy of the artist

In the recent series titled “Mind over Matter,” Suzanne discusses her powers of observation. Since childhood she focused on what she considers worthy of absorbing and using in her work. Her eye did the careful work in her doll’s house and later her investigative stares led to the realization that forms of plastic and foam can resemble lace or silk.

And from there, she developed the detailed dress-making copied from medieval eras. She says that another reality exists by controlling and navigating the eye and mind and in recent works she controls what she sees in someone or something.

Suzanne’s earliest 2007 piece, Meisje met Kap (2007) was created in a moment of coincidence: she was making a test costume for a model and ran out of fabric but picked up fine sheets of the packing foam she used to protect her art works, which lay around in her studio.

‘I wanted to make a medieval cloak without construction and when I sewed it, it stood upright – a sculpture at once.’ Stitching the garment retrieved memories of the installation which won her the prize in 1997. This foam is thinner and semi-transparent but has the same capacity to create a foam sculpture. ‘Beautiful against the skin,’ says Suzanne, ‘It looks like silk and is like a protective shield for my model.’

Later garments worn by her young models are protected by the layer of translucent material resembling a second skin. ‘The presence of a model’s skin makes it vulnerable,’ says the artist and she emphasizes the significance of ‘Vulnerability and Transience’ in her investigations into texture and feel, presence and past.”

Once she rediscovered its potential she created an original method of sculpting a garment and transforming it into a photographic art object. A more complex creation, an elegant, diaphanous wrap extending into a billowing hood, marks her earliest references to the Dutch era. Even advertisements for foam packing materials boast their soft textures and protection for sensitive and delicate surfaces – descriptions comparable with the materials she works with and the centuries-old silks almost tangible in the centuries old paintings of the young women who inspired her future work.

Since 2007, Suzanne has generated many surprises. The use of different varieties of packing foam and found materials reveal their re-use and inventiveness. ‘The idea of making something out of nothing changes our look on reality,’ she says, ‘A piece of plastic with text printed on it, used for packing a coffee machine or television can resemble a piece of silk. And the lid of a can of tomato puree can look like a ring.’ That large, abstract sculpted ring sits on the finger of the subject, Mind over Matter – Julie, Portrait of a Woman (2012) who was paired with Rogier van der Weyden’s Portrait of a Lady, 1460. The two young women separated by about half a millennium, similarly pose with fingers entwined and faces with modest expressions and down-cast eyes. They also share the pleated and visibly pinned cone-shaped head-dresses. A difference lies in the contemporary portrait’s red and black markings stamped onto the foam, instructions about recycling and warnings.

Her use of foam rubber simulates very accurately the caps and bonnets of girls and women’s swathed head-dresses, and the similarities she creates – but with subtle differences – from the wimples of mediaeval nuns to today’s beautiful variations on Islamic hijabs and head covers. The swing from past to present is now a constant in all of her subjects, materials and technologies.

The recycling symbols visible in several recent works include the closed curves of a lemniscate ∞ printed on foam and plastic and symbolizing infinity and eternity. The models for Solitude, Voltar, Julie, Lady in pearls, Room for Change and Pearl Song are all involved in the equivalent cycle of matter recycled, interpretations re-used from 15th, 16th and 17th century paintings.

if you didn’t see her earlier work from Mind Over Matter, you can see those here. 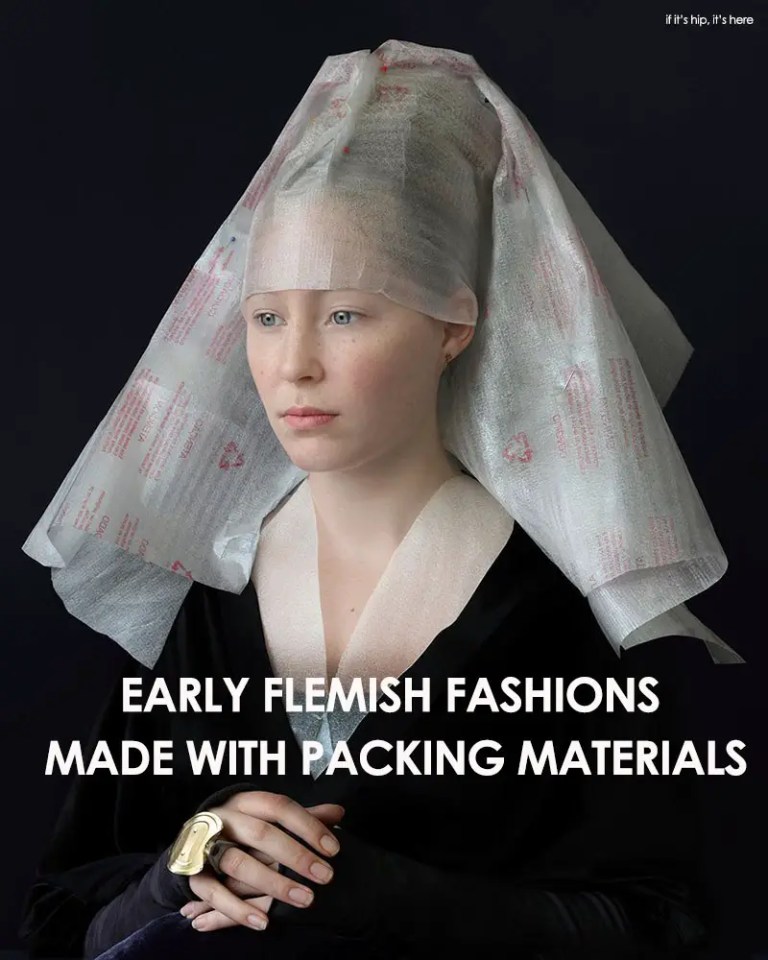 Art? Or Speakers? With Artcoustic, It’s Two, Two, Two Objects in One.