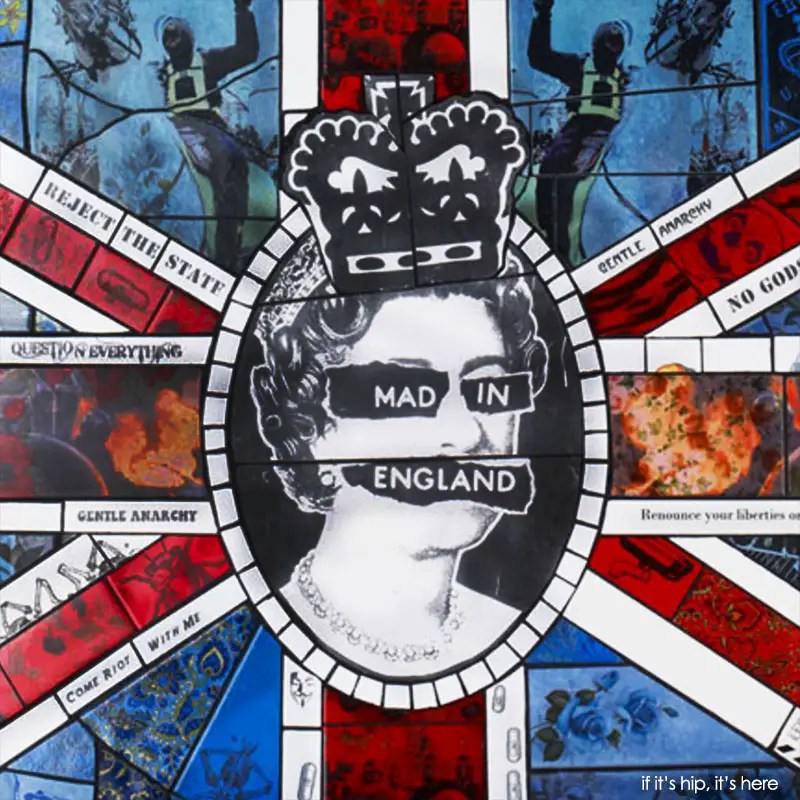 Born Baroness Carrie von Reichardt in 1966, her title (used ironically) connects her to the last Tsar of Russia, who bestowed an honorary general title to her grandfather for helping the allied forces in WW1. Referred to in some circles simply as ‘The Baroness’, Carrie works with ceramic tiles to create private commissions for clients, Carrie’s large scale murals, art installations and outdoor sculptures can be found in community and public art projects. A longtime supporter of rights for women, the homeless and recycling, she is frequently called to speak on the use of craft and art as protest. 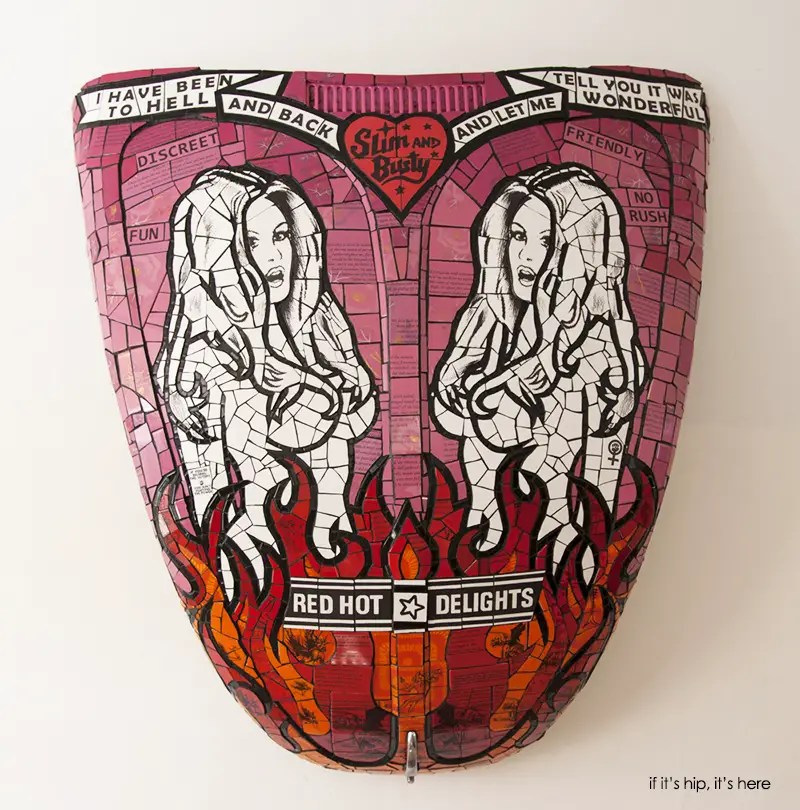 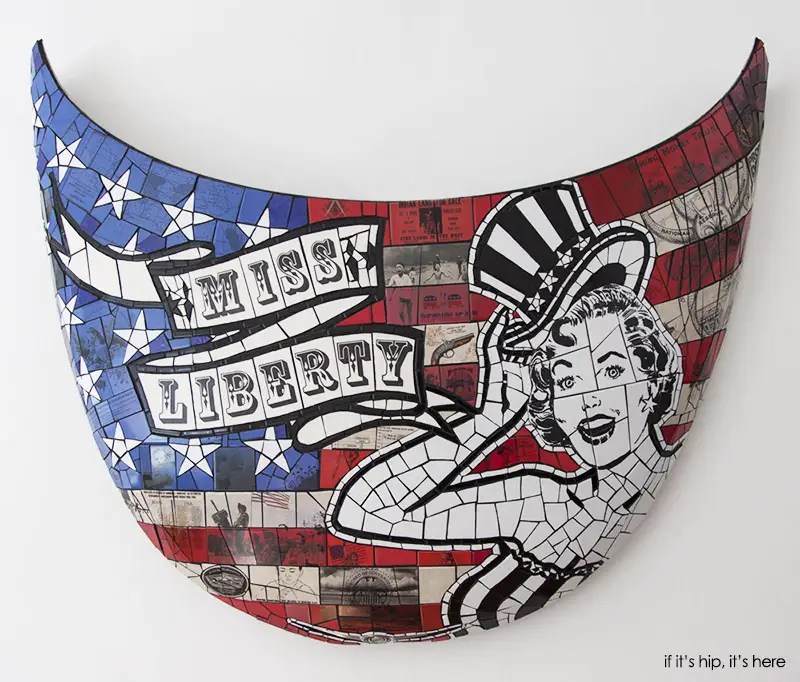 Riot Here Riot Now – 2015
Printed Ceramic on MINI Cooper bonnet (hood)
Carrie used vintage, digital and hand screen-printed ceramic transfers that she applied on the metal hood of the UK car classic. The color palette is predominantly red, blue and white. The blue tiles build the background of the artwork. Many of them contain the transferred flower patterns. The red tiles create a fire flaring from the bottom and around the Mini logo. The white tiles depict the “V for Vendetta” mask with a crown resting on it, two eyes with wings and the banner that reads the artworks title. The Vendetta mask, an international symbol for the occupy movement, enhances Carrie’s proclamation to “Riot Here, Riot Now”. 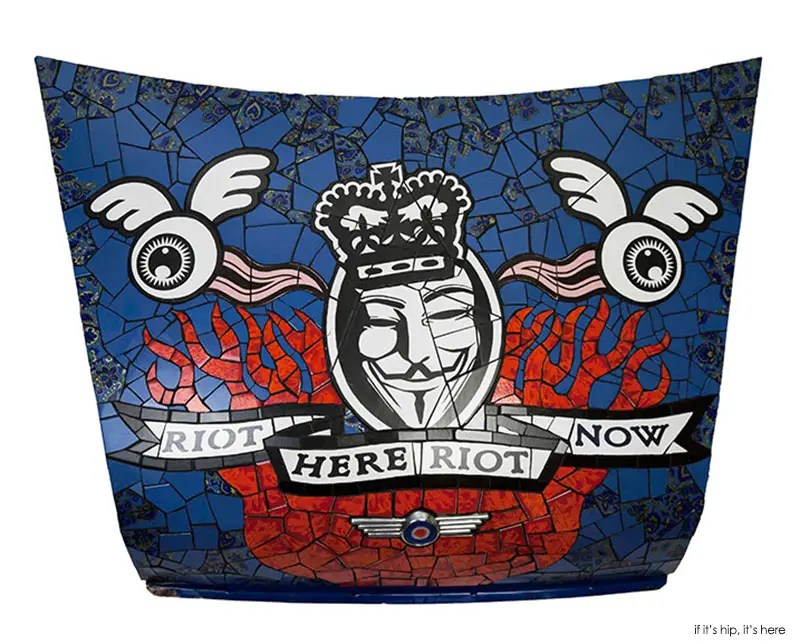 Mad in England the Jubilee – 2011
Ceramic on Ford bonnet (hood)
Commemorating the Queen’s Jubilee
Made using vintage, digital and hand screen printed ceramic transfers, this piece pays homage in part to Jamie Reid’s 1977 iconic Jubilee image. Carrie combines a red, white and blue palette with authentic Metropolitan police badges. Images of the 2012 popular insurrections are superimposed onto this motif, subtly subverting its patriotism and reflecting a rather more radical view of the British publics’ relationship with the state and Royal Family. 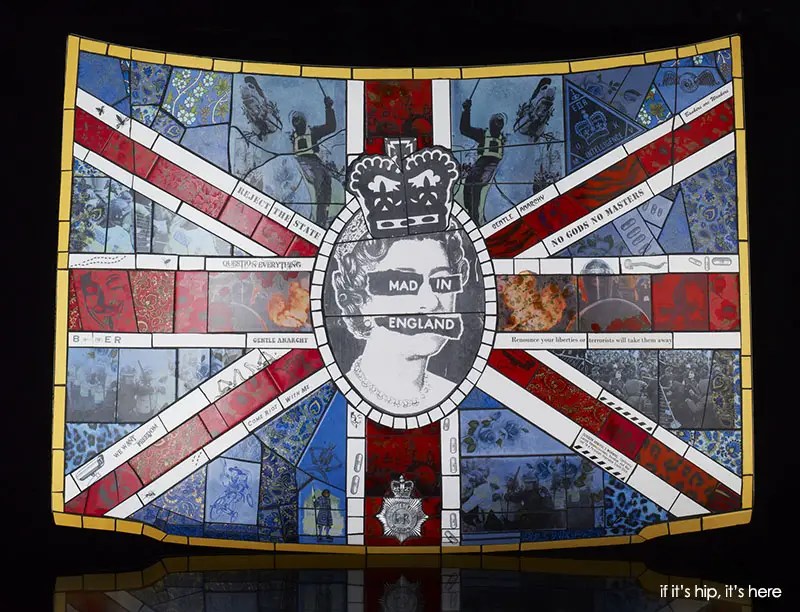 Mad in England Jubilee Pastel – 2012
Ceramic on Mini bonnet (hood)
Inspired by the invasion of all things kitsch into popular culture, this design uses vintage, digital and hand screen-printed ceramic transfers to expose the irony of this idealised portrayal of an England that never was. Other pieces by Baroness Carrie Reichardt 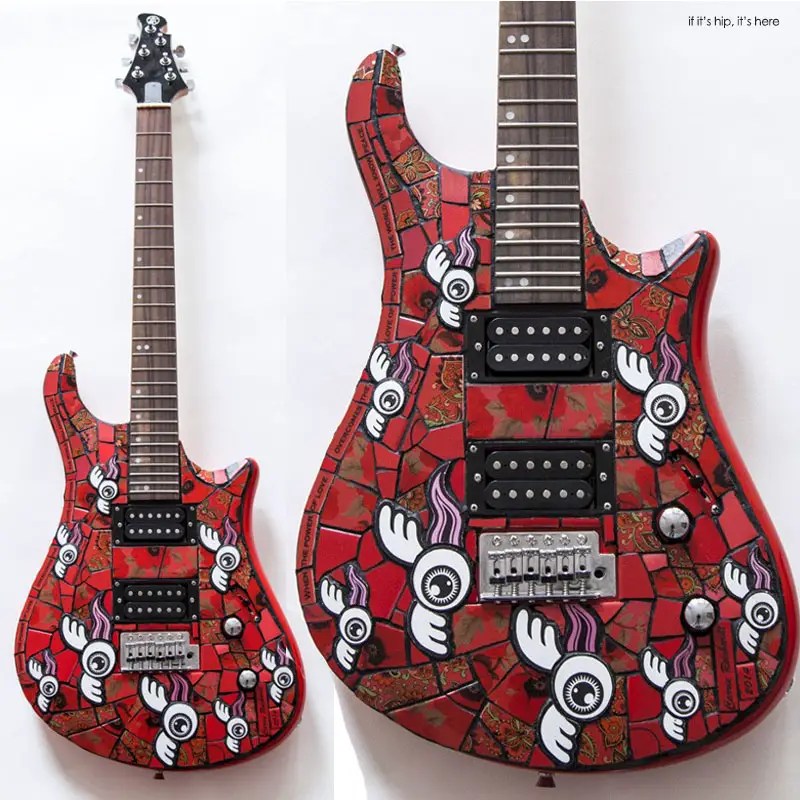 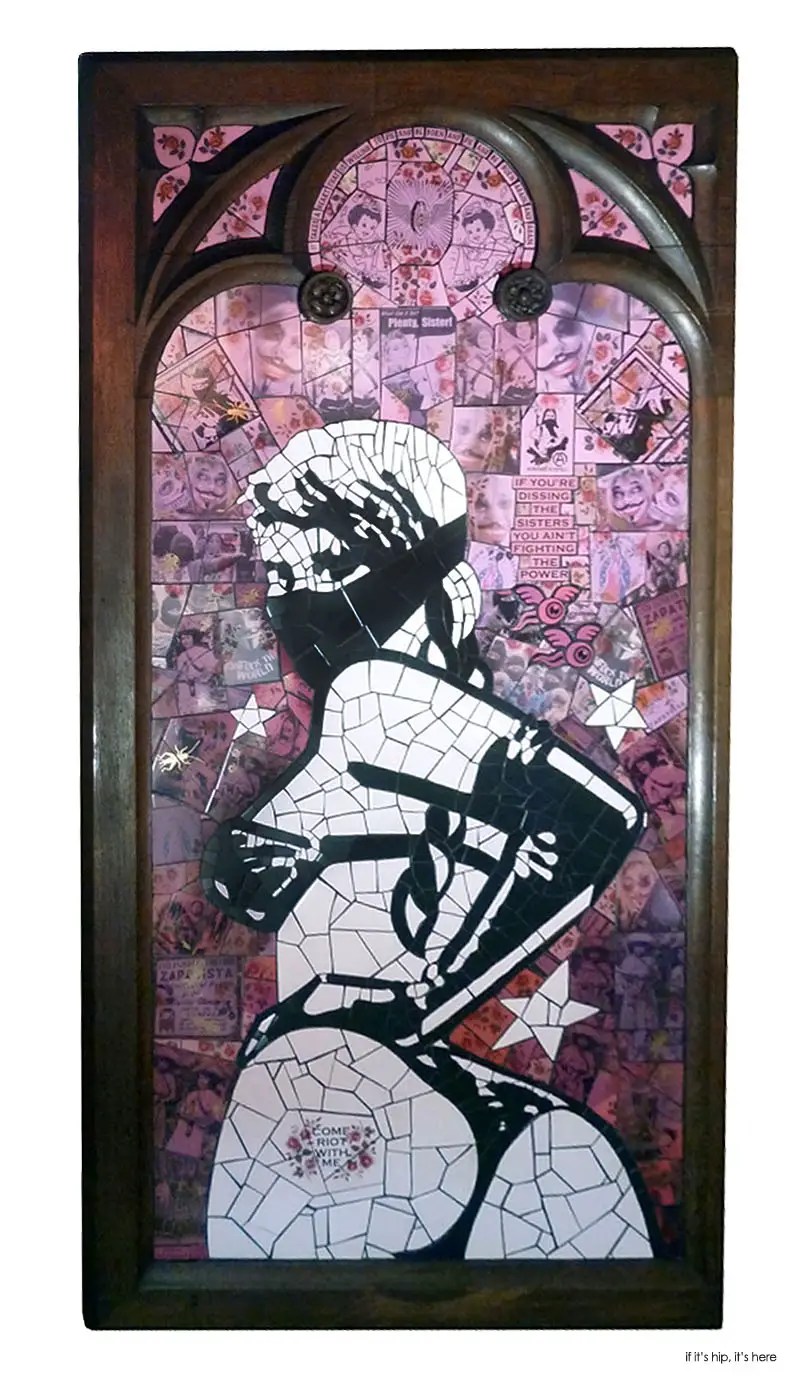 Carrie Reichardt is a leading contemporary artist, who works from a mosaic-covered studio in London, The Treatment Rooms. A figurehead for the Craftivism movement, Carrie uses murals, ceramics, screen-printing and graphic design in her work and is called upon to speak on the use of craft and art as protest.

Her work has appeared in leading galleries around the world and she represented the UK as part of a group of international artists invited to mosaic the Argentinian Government building in Buenos Aires.

Carrie is best known for her anarchic crockery, where vintage floral, kitsch, royal and religious crockery is given a new twist by re-firing with layers of new ceramic decals. They are modified in a “radical use of traditional things”, along with skulls, cheeky slogans and political statements.

Carrie Reichardt’s work has featured in The Guardian and The Evening Standard. Having spent a number of years investigating methods of transferring images onto ceramics, she has developed a technique of layering images, using a combination of homemade, vintage and digital ceramic decals. 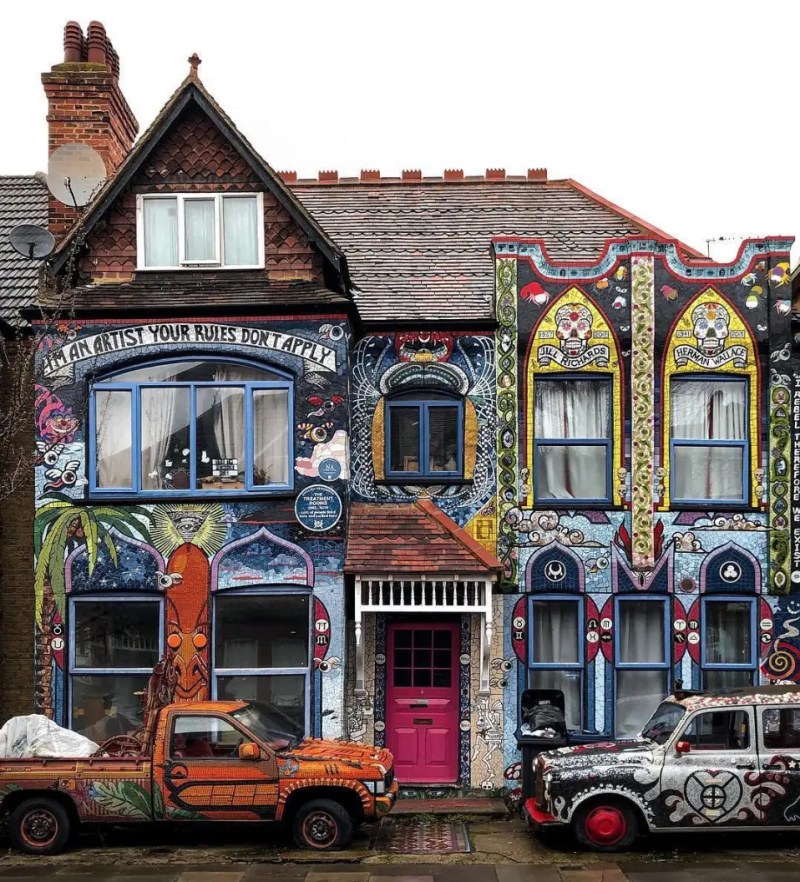 Carrie has even created the UK’s most unique Mosaic House, in Chiswick, which has rooms available to rent via Airbnb!

WHERE TO PURCHASE
Links to galleries and stores that carry Carrie’s original mosaics, tiles and prints:

Carrie has her own etsy store called Renegade Potter where she sells individual handmade tiles and her plates.

Buy her tiles, plates and original mosaics at Ink-d Gallery