` Jeff Koons at Versailles - A look At Every Piece - If It's Hip, It's Here
Skip to content Above: Jeff Koons in front of his “Split-Rocker” (2000) as it graces the famous Palace and Gardens of Versailles.

American Artist Jeff Koons – whose work is called everything from pop, kitsch.. even zany by the press – is displaying 17 of his pieces (almost all recent works from the 80s until now) at the Chateau de Versailles (aka Palace of Versailles) from September 10th through December 14th. 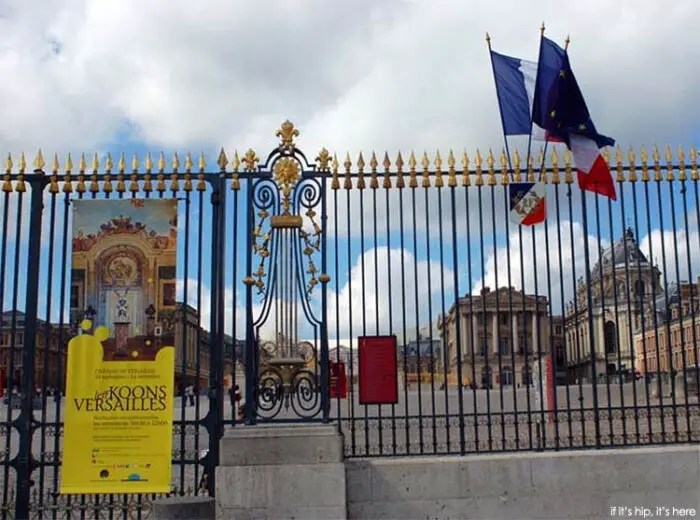 The show has been a subject of some controversy. Several dozen people demonstrated outside the palace gates on the opening day, a protest organized by the National Union of Writers of France, a little-known, right-wing group dedicated to artistic purity in France. Others feel that placing the American’s works in the French palace is a folly of sorts and the pop art of Mr. Koons has no place in a ‘perfectly balanced’ building like Versailles.

In addition, there’s the potential “conflict’ of interest given that six of the 17 pieces are actually owned by billionaire François Pinault who actually employs the show’s curator. More on that here.

In his opening remarks at the news conference, Jean-Jacques Aillagon, the chairman of Versailles and a former French culture minister, defended Versailles against its critics. He called Mr. Koons a “cultivated” artist who treated the artistic history of Versailles with respect, and described the exhibition as “a great cultural event.”

Mr. Koons praised the “openness” of France for its decision to exhibit an American artist at Versailles. And he said that he drew his inspiration for his floral sculptures from the “fantasy and control” shown by Louis XIV.

Personally, I find the juxtaposition of the new with the old, the shiny with the antiquated and the preposterous with the traditional to be exhilarating and an effective way to highlight the best of both genres. Koons’ work is almost more appealing to me when placed in these settings than when in a more modern and miminalist space.

Take a look at the exhibit, curated by Elena Guena and the Pompidou’s Laurent Le Bon. I have compiled images of all 17 pieces, so now you can decide what you think: 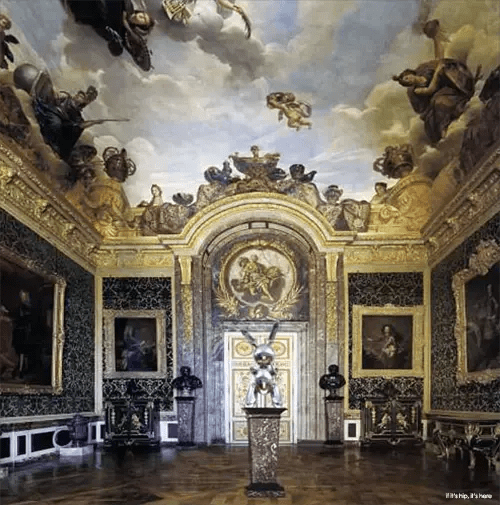 Not everyone in France was as pleased by the installation. Several dozen people demonstrated outside the palace gates, a protest organized by the National Union of Writers of France (a little-known, right-wing group dedicated to artistic purity in France). The group’s chairman demanded that the exhibit be canceled.

An aluminum red lobster hangs from the ceiling alongside a crystal chandelier in the Mars Salon. Each of Koons’s works is a “dialogue” with the setting, he said. The placing of the lobster in the room dedicated to Mars, the god of war, for example, “goes back to medieval-type times.” The graphics painted on the lobster “almost represent flames and fire. And so there’s this sense that if you stay in the public eye long enough, eventually that could be your fate.”

Mr. Koons denied that the placement of his white marble “Self-Portrait” in the same room as portraits of Louis XIV and Louis XVI was a gesture of arrogance. “It didn’t have to do with my own ego, but it did have to do with the playfulness and a contemporary monumentality,” he said.

As to why he put an assemblage of vacuum cleaners among portraits of royal women in the queen’s antechamber, Mr. Koons replied that, among other things, vacuum cleaners are “very womb-like.”

Unlike some of the other sculptures, whose materials and shapes seem jarring, the decorative rococo style of the Michael Jackson sculpture and the use of shades of white and gold help it to blend into its setting.

An open-mouthed, bare-breasted blonde holding a pink panther seems to be laughing at a 1729 painting of King Louis XV conferring peace upon Europe.

The fabulous images above in this post are from several sources; Getty, Reuters, the Associated Press, La MJC , and the Independent. Special thanks to Ed Alcock and Elaine Sciolino of the New York Times.

The Website:
The website about the exhibition has a fun interface. With a moving X and Y axis, one of which contains the art, the others, the settings, you can align them and enlarge them.

Only not all the ‘sculptures’ when placed in the appropriate ‘setting’ actually work (still some bugs on the site I suppose). The site also claims to have both an iTunes tour download and a catalog ‘coming soon’.

Here are some screen grabs for you: Detail of the Y axis: Some other examples from the site: