` Modern Wood Rocking Chairs - If It's Hip, It's Here
Skip to content 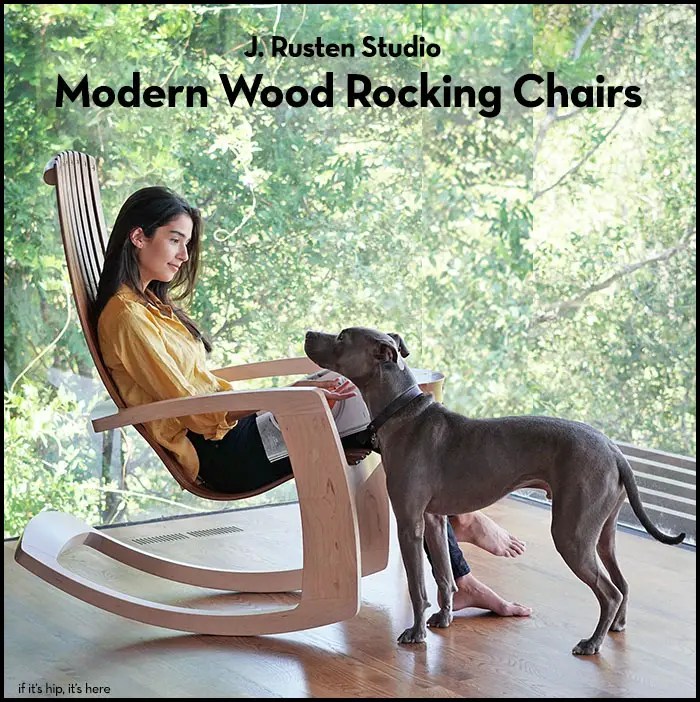 The Rocking Chair is a classic piece of furniture that never goes out of style. Constantly updated and reinvented by furniture designers all over the world, the chair’s fluid, easy back and forth movement has proven to put even the most irritable to sleep. Rocking chairs and rockers are produced and sold in just about every incarnation imaginable, but these steamed and bent wood modern rocking chairs by J. Rusten Studio stood out as some of the most beautiful we’ve come across in awhile.

The hand crafted steamed and bent wood slat modern rocking chairs from J.Rusten Studio are so sensuously shaped, they are actually sexy. The chair’s curves were designed for comfort without the aid of upholstery or cushioning. Looking as though they are almost fluid, the chairs appear light but substantial at the same time.

We first introduced you to furniture maker  and wood worker Jared Rusten of J. Rusten Studios with his wonderful California-shaped wood desks and coffee tables. At that time he was working out of a San Francisco studio. In 2016 he and his wife moved their studio to a 100 year old warehouse in the historic district of Stockton, CA and began making, among other things, rocking chairs.

They set out to design a modern rocking chair to meet the following criteria: 1) It must be extremely comfortable with no upholstery. 2) It must have a high enough back to allow a tall person to rest their head. 3) It must have a sense of visual delicacy but be strong enough to endure generations of use and 4) It must be a simple, modern, and original design that departs from the traditional rocking chair form. From the positive feedback they’ve received, it appears they reached their goal. The modern rocking chair has a danish design feel and been be produced in multiple woods. Natural and bleached maple woods, ebonized and bleached oak, rich cherry woods and more in various combinations thereof.

The craftsmanship is apparent in the immaculate details like the beautiful joinery and machined screws and from afar, its profile is fit for a museum. These are the type of rocking chairs that are passed down from generation to generation and just get better with an aged patina. A true sculptural and functional heirloom.

When asked on Instagram how long it takes to make one of these rockers, Jared replied “It’s usually about a month of 60+hr weeks. The first half is lumber breakdown, laminating, shaping, joinery, assembly, and the 2nd half is sanding/finishing. It’s always tempting to think the sanding/finishing can’t take as long as everything else combined but it does. There is a little bit of economy in running multiple parts (which I always do), but those milling/joinery machine set-ups are only a small percentage of the whole. With every batch I get faster/more efficient at certain things, but then find other areas to improve (spend more time on). So, of those 250hrs, 10% is probably making new/better jigs, dedicated tools, etc.”

He went on to explain “Each seat slat is composed of 6 layers/plys. So, there’s a top facing lamination, a rear facing one, and 4 sandwiched in between. Each top set and rear set are book-matched pairs. Generally, I prefer asymmetry and randomness, but I don’t want strong grain lines to fight too hard with the lines of the design. For example, if I had one odd slat where the grain ran out to one side, it’d create an optical illusion that would make the slat look bent or curved weird. There’s a lot of care that goes into selection/composition and the worst thing that can happen is a top facing ply gets accidentally flipped or a slat stack is put in the laminating form the wrong way in the countdown clock chaos of the glue-up. One mistake with one slat and the entire batch of 8 is ruined”

About J. Rusten Studio:
Founded in 2002 by Jared Rusten to create compelling and collectible design objects that awaken public and private space. The studio engages tradition’s best practices while pushing the bounds of woodworking and other disciplines. Natural materials are elevated by composing them into simple, modern forms. Finishes are engineered to get better with age and communicate a sublime warmth and presence only possible with obsessive attention. Often, Jared and his team source rare and unique California hardwood species like Claro Walnut and Bay Laurel milled from fallen or displaced trees.

Cute & Comforting Plushie Poufs We Could All Use Right Now.