` The Word Love In Art, Literally - If It's Hip, It's Here
Skip to content 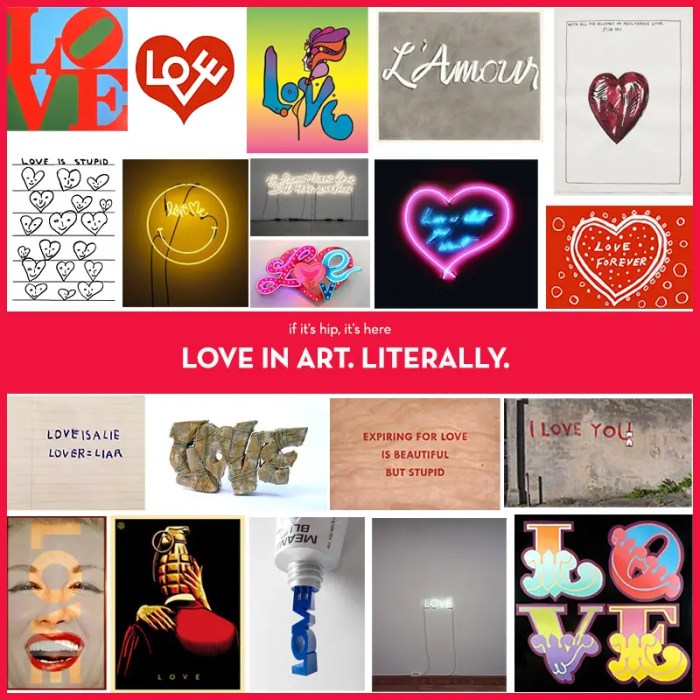 We’ve already shared with you The Evolution of the Kiss in Art through 24 works for a past Valentine’s Day. Now we bring you a more literal interpretation of romance – the various ways 20 different artists have portrayed the word “Love” through paintings, drawings, lithography, sculpture and mixed media since the first and best known by Robert Indiana in 1966.

The Word Love In Art

The first and inarguably best known depiction of the four letters that make up the word ‘love’ is that by pop artist Robert Indiana. The two-row rendering of the word, with its tilted “O,” has become one of the most recognizable works of modern art in the world. What began as a commission for a Christmas Card from the Museum of Modern Art in 1965 turned into the 6′ x 6′ painting on canvas (shown below)  that spawned tons of variations including everything from postage stamps to giant public sculptures.

“The word LOVE got to be the way it is because I have a kind of a passion about symmetry and the dividing of things into equal parts. The word LOVE is that way because those four letters best fit a square if the square is squared by that particular arrangement. And it was really that sort of a necessity for a very compact form that I came upon that arrangement…With the red, blue and green paintings the interaction in the eye is of such a nature that with the slightest change of light the fields automatically interchange, the positive becomes negative and vice versa, with almost a violent effect in the eye.” — Robert Indiana

After Indiana’s iconic depiction, the word “love” has since appeared as art in various mediums ranging from graphite to neon by artists all over the world. Here are twenty examples, shown in chronological order from first to last, for you. Click on the artist’s name for more information.