` Liquid Death Vegan Cannibal Steakhouse - If It's Hip, It's Here
Skip to content 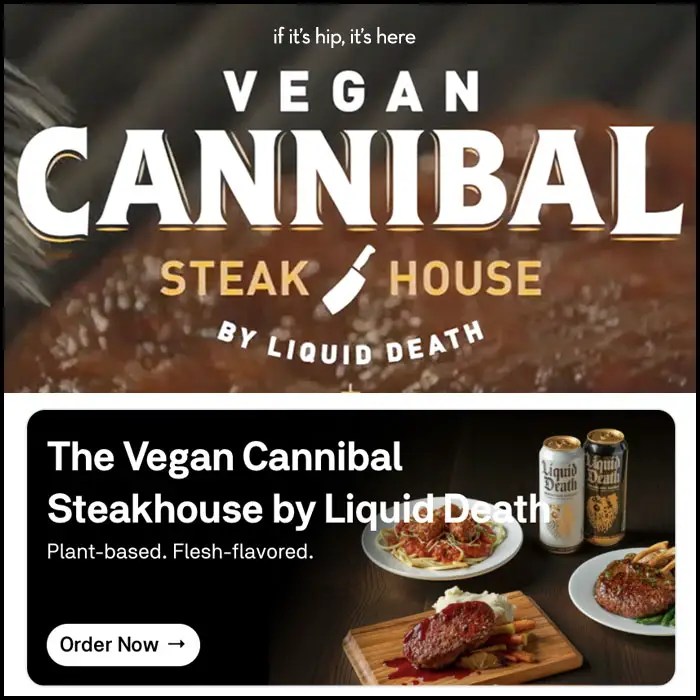 Liquid Death still and sparkling waters come from a brand with an edgy attitude, clever marketing and a worthwhile objective. Self-described as “a funny water company who hates corporate marketing as much as you do“, they’ve made it their mission to make people laugh and to drink more water more often, simultaneously helping to quell plastic pollution. Now they’ve launched a Vegan Cannibal Steakhouse serving cruelty-free human meat you can order through Postmates.

With Halloween around the corner, Liquid Death, a startup based in Los Angeles and backed by a cadre of celebrities, launched a stunt today with delivery service via Postmates. The Vegan Cannibal Steakhouse is described as offering “100% plant-based, cruelty-free human meat.” With such offerings as New Yorkerless Strip Steak, Guiltless Grilled Rack of Sam and Manless Meatballs in Marinara, the food can actually be ordered via Postmates in New York or Los Angeles today. (and no, it’s not actually made from people). 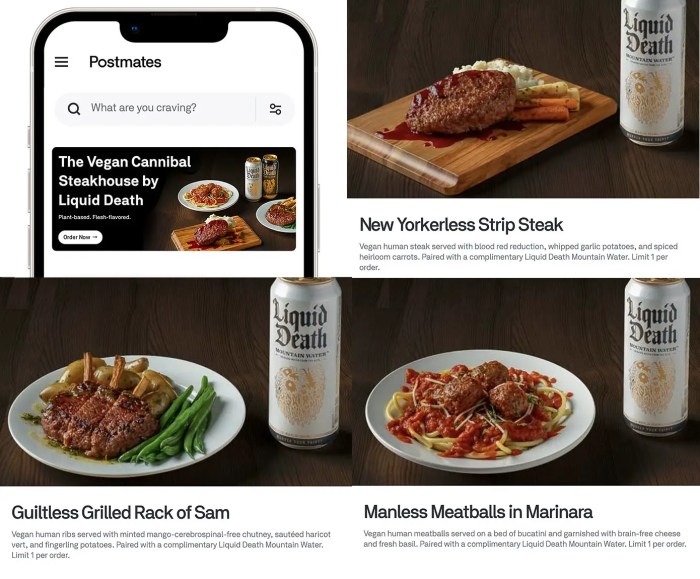 Should you miss your opportunity to graze on this macabre menu, don’t  miss out on keeping yourself hydrated this Halloween with Liquid Death’s still and sparkling waters. 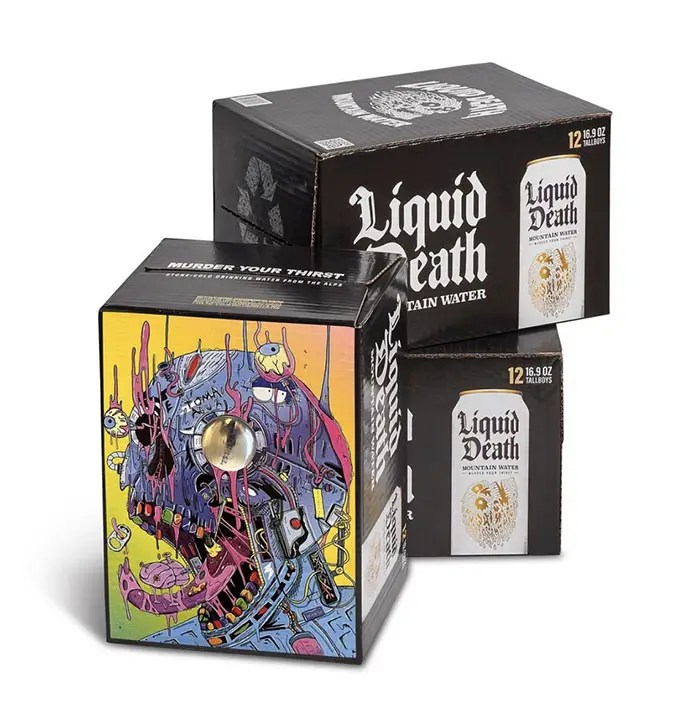 Packaged in cool-looking, infinitely recyclable cans, Liquid Death Still and Sparkling Waters come straight from the Alps and undergo a fancy purification process that doesn’t alter the original minerals and electrolytes of the water. Most top-selling bottled waters are actually just over-purified municipal tap water. Liquid Death comes from an underground mountain spring deep below a few hundred feet of stone. The water is tapped right from the spring into their bottler where it goes directly into air-tight cans. The purification process maintains 100% of the original mineral profile of the water, giving Liquid Death over 2x more electrolytes than bottled water brands than Essentia, SmartWater, LifeWtr, Core and Aquafina. Aluminum is infinitely more recyclable than plastic. Especially since it’s no longer profitable to recycle plastic because the cost of sorting and processing is so high for many facilities, they just send it to landfills rather than go out of business trying to recycle. Even Environmental economists are now saying that it’s actually better for the planet to simply throw your plastic in the trash so that it requires less trucking to get it to the landfill. Add to that the fact that most recycled plastic is such low quality it can’t be used to make new bottles becoming worthless plastic waste. Another bonus to packaging still and sparkling purified water in cans is that it stays ice cold much longer.

Liquid Death is so perfect for Halloween, they even sell an LED coffin nightlight to display your single tallboy of Liquid Death. The skull-embellished can designs come in recyclable cardboard cases which have cool, limited edition art featured on the bottom. In addition to purchasing individual cans or cases of Liquid Death from Amazon, you can subscribe to home delivery from their website.

The folks behind Liquid Death have had a lot of fun promoting their brand. They’ve made their own horror film,  faux commercials for Vegan Cannibals and real collaborations with brand Ambassador Tony Hawk and “The Deep” from Amazon’s The Boys. 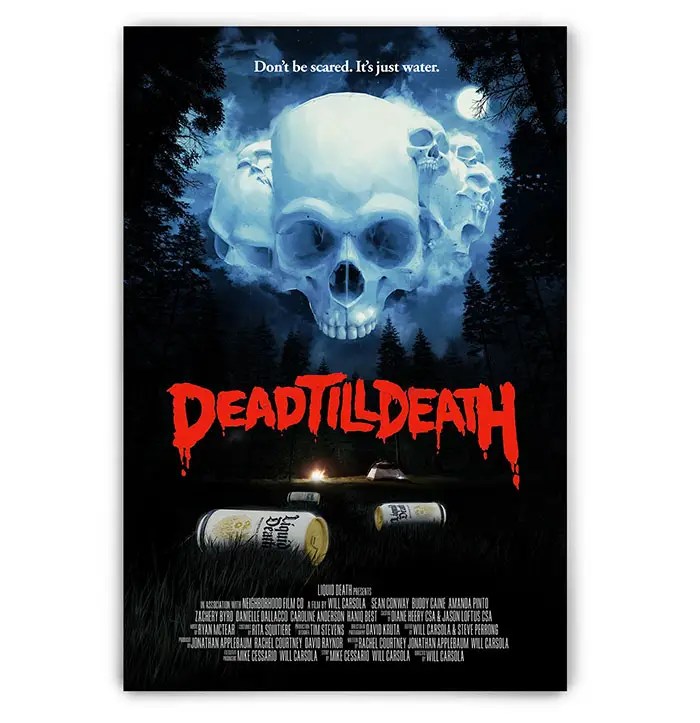 They even sell sea animal plushies (Cutie Polluties) that have been ravaged by pollution, music on vinyl and have an entire funny microsite dedicated to “Keeping The Underworld Beautiful”

Go to their site to spend some time with their inspiring creativity.

Order from their Vegan Cannibal Steakhouse on Postmates here.

A Truly Twisted Tale of A Teen’s First Kiss: Grace by Tomas Mankovsky