` When Is Ham Worthy Of A Blog Post? When It's Extrem Puro Extremadura Package Design.. - If It's Hip, It's Here
Skip to content 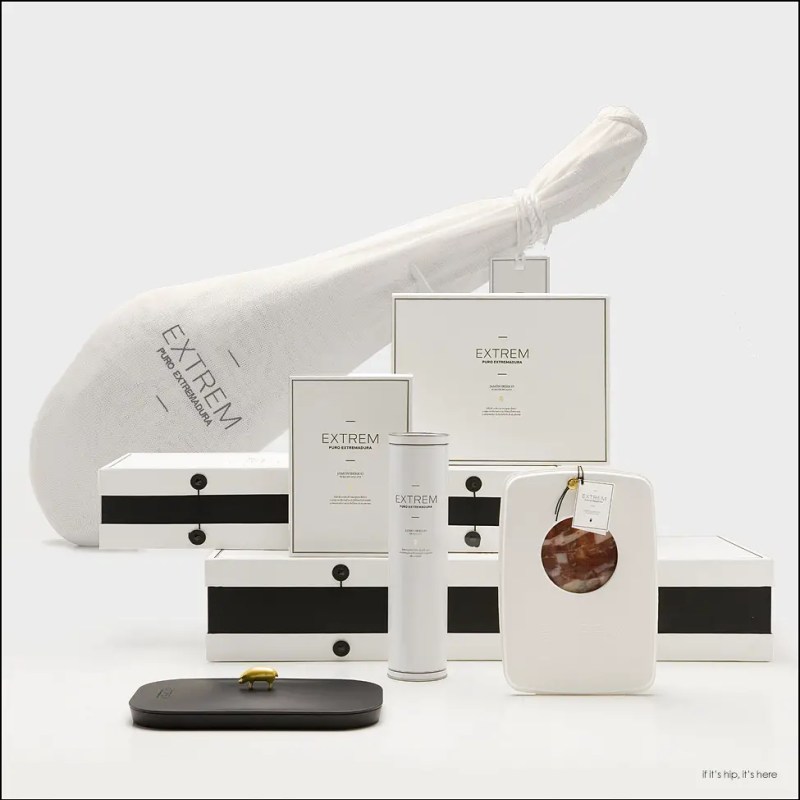 Pork, Ham, Sausage? On an art and design blog? Yep, that’s because this particular brand of ham products are cultivated, cured, processed, packaged and marketed as though it were expensive jewelry. And rightly so. Foodies, get ready to meet Spain’s Extrem Puro Extremadura, beautifully packaged and branded pure Iberian acorn-fed ham of the highest quality.

Available both on the bone and hand cut in their traditional way, Extrem’s ham-products are so beautifully packaged -and tasty- that they enter into a category of their own, alongside such high-end delicacies as caviar and fine chocolate. 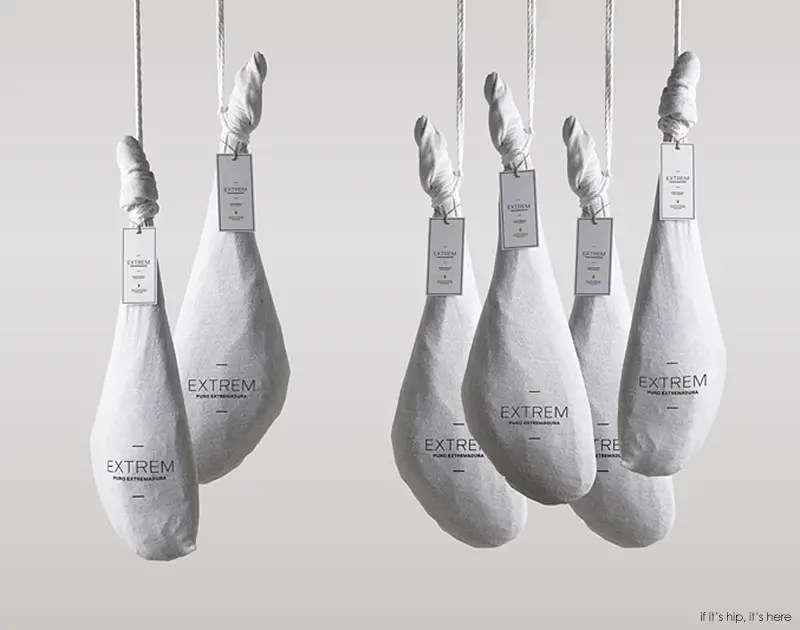 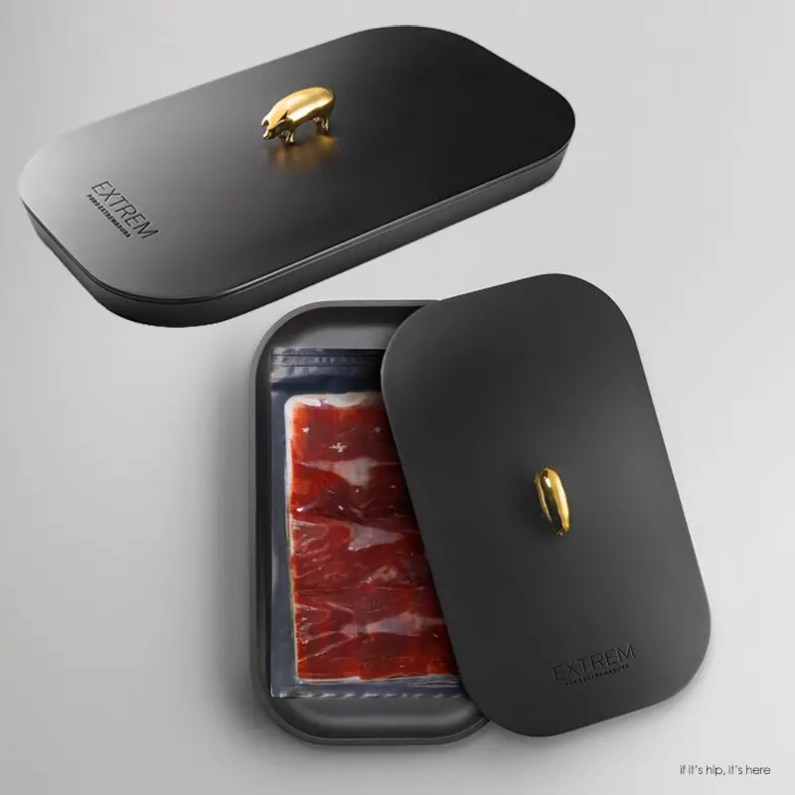 THE PIGS
The acorn-fed pure Iberian pig is an indigenous breed from the Iberian peninsula descended from the Mediterranean wild boar; it is considered unique due to its origin and they way fat is stored between the muscle fibres, a characteristic that gives its meat special aromas and texture. The peculiarities of its appearance include the black or slightly marbled hoof and the slim, strong shank. It is the source of the best ham in the world, a true treasure of Spanish gastronomy. But Iberian products are not just delicacies, they are also healthy products with a high nutritional value: they are rich in proteins, vitamins, minerals and oleic acid and their fats are the healthiest of all animal fats. They increase “good cholesterol” levels and are low in calories.

THE HABITAT – The Dehesa Extremadura
*The Dehesa is the natural habitat of the Iberian pig, a species that is indigenous in the Iberian Peninsula. It consists of wooded areas with holm oaks and cork oaks from Mediterranean forests and is used as pastureland for the animals. These are natural ecosystems protected by the EU because of their ecological value, and are conserved by the presence of the Iberian pig. The company’s land in the dehesas is in the very heart of Extremadura, one of the four Spanish regions with a denomination of origin, a name that is known for the seriousness of its quality and guarantee, and a part of the best conserved ecosystem in Europe. An ecological paradise where the use of the natural resources is in perfect balance with conservation and sustainability.

More than 9,000 hectares of dehesa (all furnished with the ISO 14001 environmental certificate) is where the Iberian pigs live free and spend the montanera (which lasts from October to March) grazing on acorns and wild grass in harmony with the environment.

THE SEVEN FLAVORS OF HAM
Extrem’s pure Iberian acorn-fed ham is obtained from the hind legs of the pig because these are bigger and longer. This is the most noble part of the Iberian pig and has less fat and a longer curing time, characteristics that give it a more delicate and complex aroma. People say that Iberian ham has 7 flavours depending on how it is cut. Many consider it a gastronomic gem at world level. Others believe it is the expression of taste of a whole land and its culture. Some Japanese researchers have even invented a term to define its flavour: umami, the fifth flavour after sweet, salty, acidic and bitter.

There are many opinions but two things are certain: firstly, that the genetics, the breed and the origin, feed based on acorns, the correct physical development of the animal, the curing and the maturing are factors that determine the flavour and aromas of an Iberian ham. Secondly, that Iberian ham tastes of passion, tradition and pleasure.

The flavour of Iberian ham is defined as subtle, robust, intense… a multitude of nuances, aromas and scents. Colour, texture and juiciness stimulate our senses beyond that of taste. Because Extrem Puro Extremadura Iberian ham has seven flavours, thousands of nuances and the same extraordinary quality at all times.

THE PACKAGING AND BRANDING

Spain’s creative agency Gallén + Ibáñez developed a visual identity based on the idea that luxury does not lie in wealth or embellishment, but rather, as Coco Chanel said, on the absence of vulgarity. The values of simplicity, exclusivity and quality were the pillars of their design approach for Extrem as exemplified through the graphic elegance, quality materials and unusual printing methods. They enlisted the collaboration of typographer Andreu Balius for the lettering and Lavernia & Cienfuegos for the cellulose packaging. 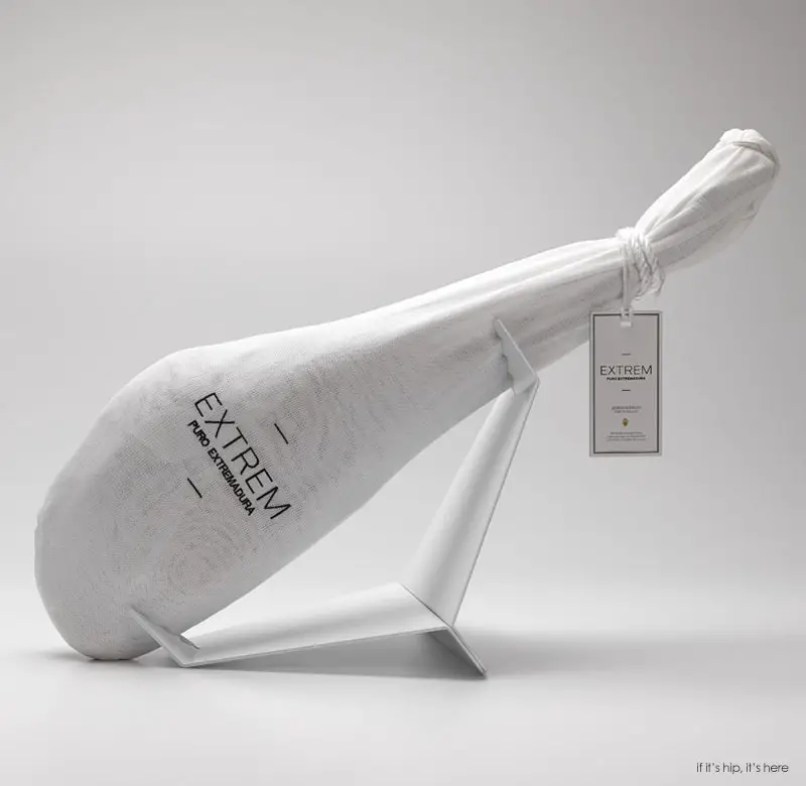 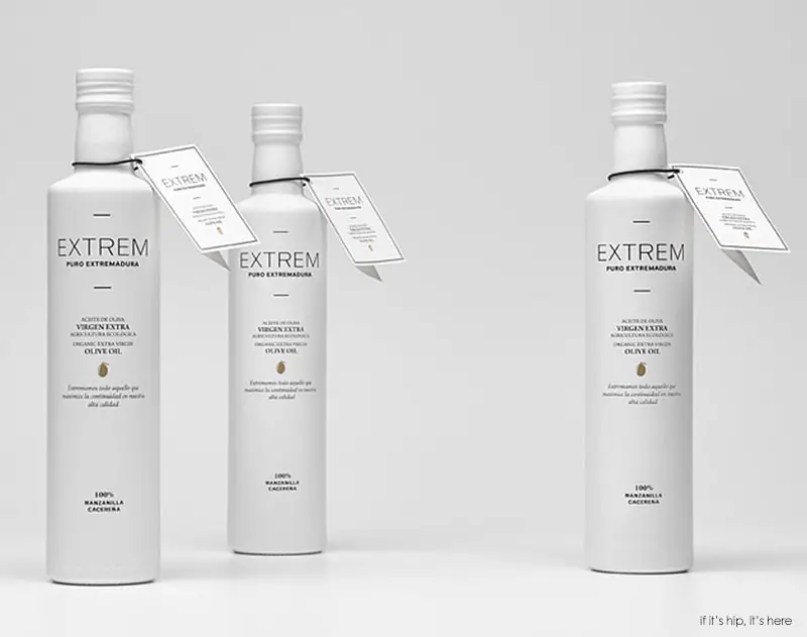 Their sausages and salamis in formal looking canisters, their vacuum packed boxed items of elegant design – even their large branded cutting boards and aprons all have an upscale look and feel. The thin sans serif logotype coupled with the restrain of black and white accented with a small touch of gold with the foil-embossed acorn is consistent and timeless. 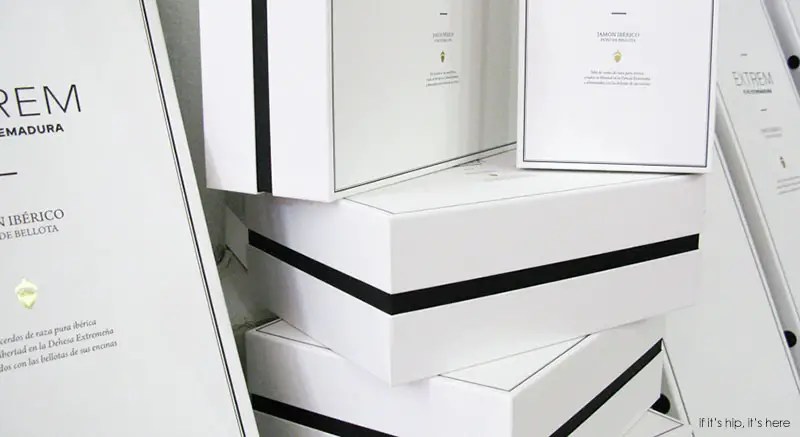 There is one particular product that stands out amongst the line which is shown below.  The package design by Lavernia & Cienfuegos has been the recipient of several awards including a 2014 Pentaward and 1st Place in the Prepared Food category of the prestigious Dieline Awards in 2014. 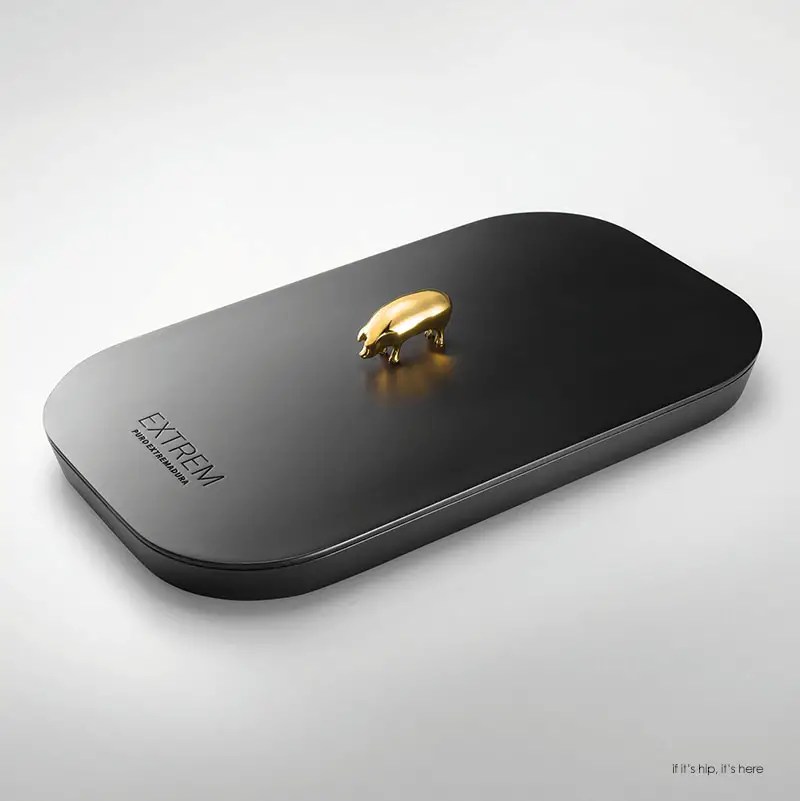 Packaged in a sleek matte black box topped with a golden handle in the shape of a pig, the Iberian, acorn-fed ham,  launched by Agriculturas Diversas, wanted prestigious new packaging for their flagship product. In this gorgeously designed box, the ham can be purchased as a special gift. In addition to positioning the brand as ‘premium’ and ‘luxe’ in gourmet shops around the world, the design conveys the product’s extremely high quality and puts it on par with other gastronomic delicacies such as caviar and foie gras. 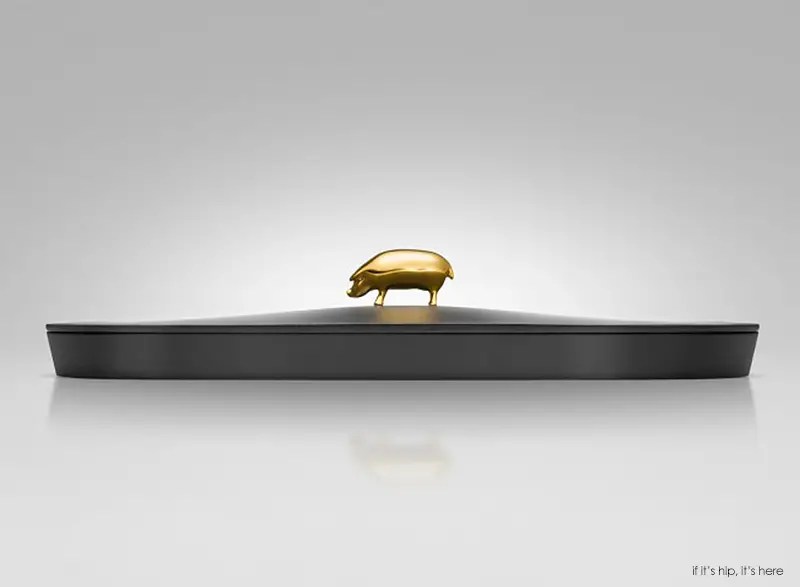 To identify the four commercial categories established for the products more easily, they have a different colored tag for each designation and they will be attached to every ham and shoulder in the abattoir. These tags may not be removed at any time during the sale process. 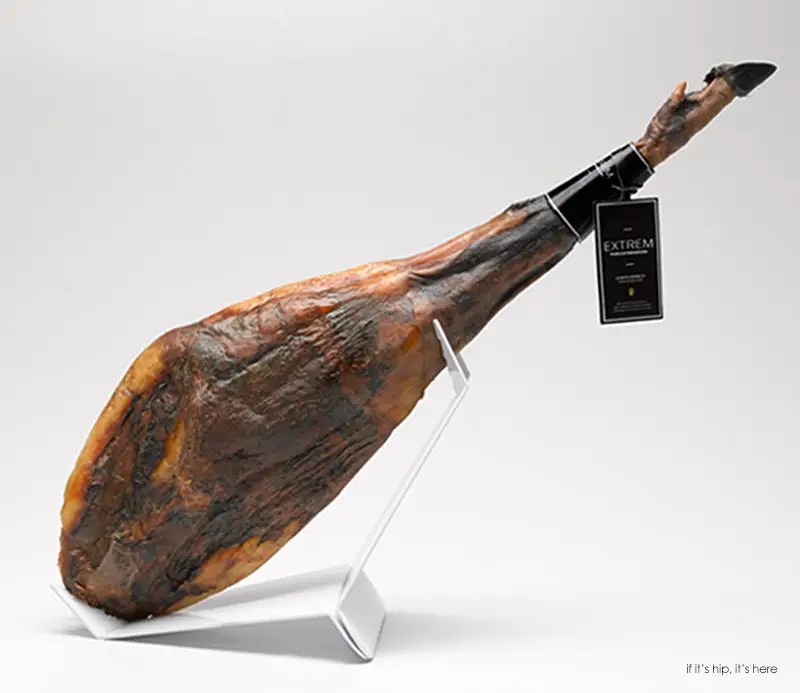 If you’ve been to one of the four Ibérica Restaurants in London, where they strive for the most authentic flavours of Spanish cuisine, they serve Extrem products in their restaurants.

With great pride in their production process, they invite you to come visit anytime.

WALLPAPER* and JAGUAR CARS Announce The Winners of Wallpaper Awards 08