` Graphic Designers Gave Us 30 Reasons (& Hundreds More) To Elect Obama - If It's Hip, It's Here
Skip to content

Shepard Fairey’s HOPE Obama poster is probably the most recognized presidential propaganda out there, but he certainly wasn’t the only one who designed a beautiful poster in support of Barack Obama. Nor the best poster. 30 Reasons and Design/ers for Obama are two groups who created some terrific poster designs for The President-elect.

Tons of graphic artists, illustrators, painters, typographers and more have done so. Below are just a few examples.

Enter “30 Reasons”, a 30-day email and internet campaign to encourage people to vote for Barack Obama. Their goal was simple: Use design to build a logical, multi-faceted argument for Obama and make it easy to share each reason with another person.

I especially liked the use of their email campaign as a way of communicating the support for Obama. And their artwork was more communicating the reason to vote for the Democratic candidate rather than just a poster of him. 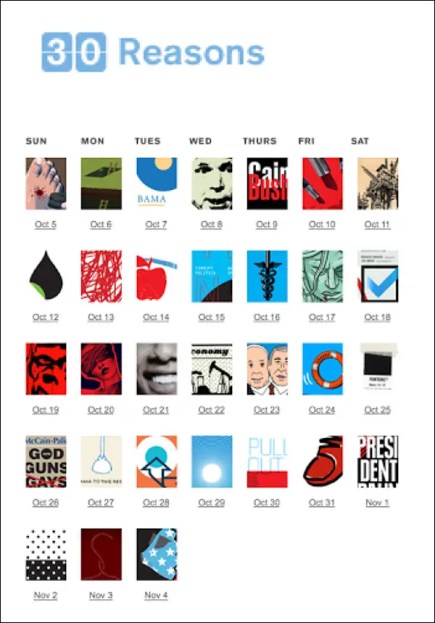 They enlisted 30 graphic designers to create posters that represented a reason to vote for Obama. Starting on the October 5th, they posted a new poster online each day and emailed it to those signed up on their list. Recipients could easily share the email with other supporters and friends who were undecided.

Here are a few of my personal favorites: Above: by Adam Snetman, New York Above: by John Klotnia, New York Above: by Scott Thares, Minnesota Above: by Milton Glaser, New York Above: by Julia Zimmerman, New York Above: by Chris Thomas, New York Above: by Chaz Maviyane, Massachusetts Above: by Matt Dorfman, New York Above: by Luba Lukova, New York

Curated by Julia Zimmerman, Chris Thomas, and Jesse Arneson. Go look at all 30 of them. They are all worth seeing and available to download as pdfs here.

Like to see Obama posters? well, the you MUST check out Design/ers for Obama, where all the amazing work on here is visible as well as links to various sites with artwork for Obama. Design/ers for Obama was created when Design Observer essentially asked the question, “how can graphic designers best support Barack Obama?” The answer ended up extending the question to cover visual communicators at all levels. In addition to supporting Obama for America they jumped at the opportunity to bring the spirit of grassroots style organizing and collaboration to poster design which, to them, meant not only forming communal bonds but sharing the fruits of their efforts equally and in such a way that anyone can enjoy and benefit from (because most of us do not own our own printing presses).

Simpsons Animator Liz Climo Does A Cute and Quirky 12 Days Of Christmas.