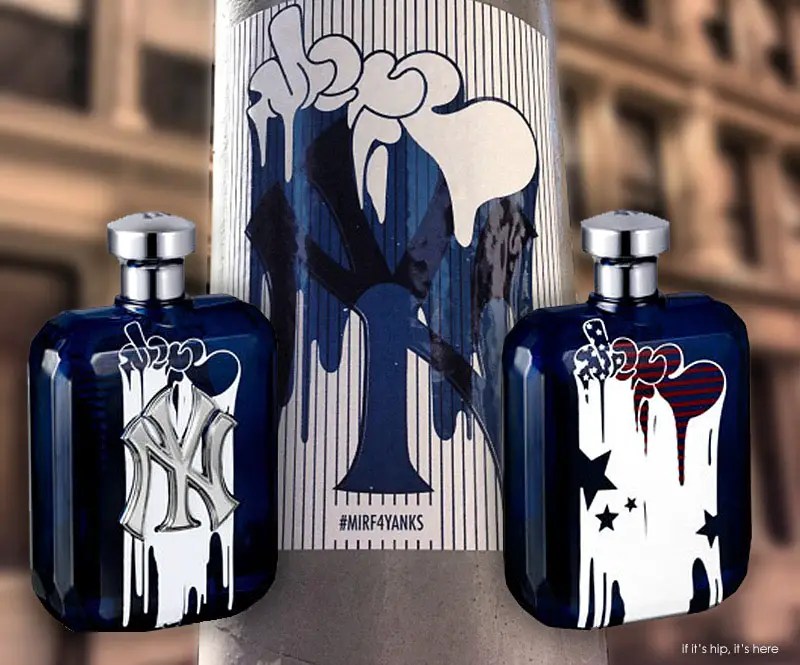 The official fragrance of the NY Yankees has just released their limited edition men’s bottle with exclusive design and artwork done by none other than NYC graffiti legends Mint&Serf aka MIRF. Mint&Serf’s distinctive drippy MIRF, which is featured on both the front and back of the bottle (above) , conveys their enthusiasm for New York, yet also expresses their understanding of the overall brand of the city. “People who know us can tell you that we are both diehard New Yorkers. From Astoria, Queens to Sheepshead Bay, Brooklyn to East Tremont Ave in the Bronx to Victoria Blvd in Staten Island, graffiti opened us up to almost every neighborhood in New York City. We live and breathe New York City,” said Mint&Serf. “When it comes to the symbol of New York, there is nothing more iconic and recognizable than the New York Yankees; to think that graffiti we created on the streets of New York will be immortalized alongside the New York Yankees logo is an honor.” Tagged with #MIRF4Yanks, posters have begun appearing around the city: “It has been an honor and a privilege to work with the New York Yankees, Major League Baseball Properties and now with Mint&Serf on this fragrance,” said Thomas Butkiewicz, CEO of Cloudbreak. “Mint&Serf’s artistic creativity and unique knowledge of New York City will bring an unparalleled freshness to the fragrance industry.”

The New York Yankees™ Limited Edition Graffiti EDT is available now online at at  NYYankeesFragrance.com and at Macy’s, Lord & Taylor and Belk.
200ml/6.7oz bottle for $85.

This cutting edge project introduces a new conceptualization for beauty brands; the NY Yankees limited edition men’s fragrance promises to be on every guy’s radar through and beyond Major League Baseball season.

The Death Star Bluetooth Speaker Is A Must Have for Star Wars Fans.