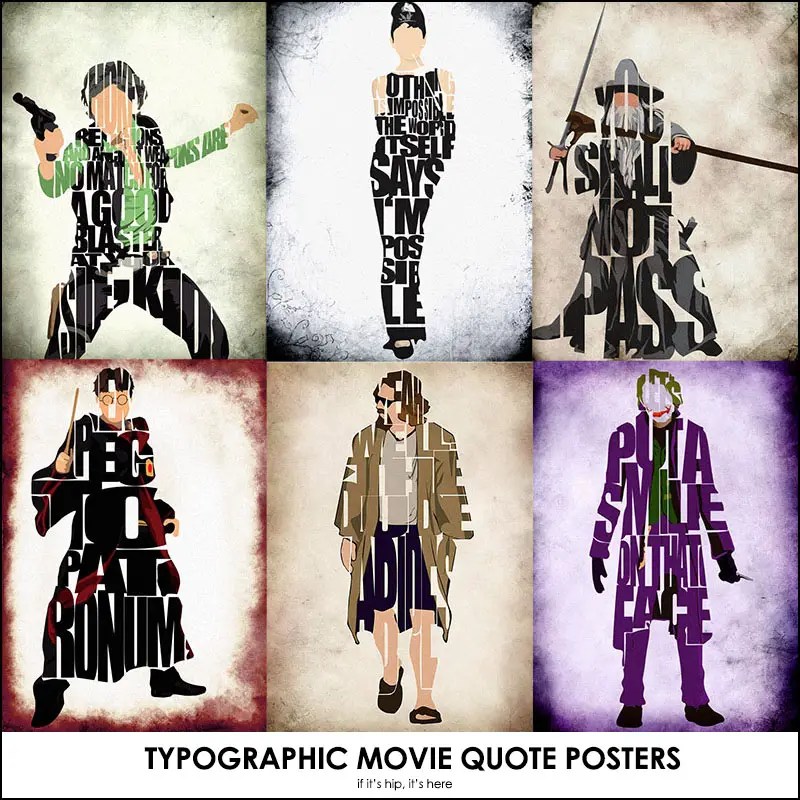 Professional graphic designer and illustrator Ayse T. Werner quit her boring job to be able to what she really wanted to do – photography and drawing. And after seeing these, I’m so glad she did and I think you’ll agree.

She has combined her artistic skills with her passion for movies, video games, comics and TV Series and opened a store on etsy called Geek My Wall where she sells her minimal typographic posters and character prints in a variety of sizes and at very reasonable prices.

Pop culture icons such as Holly GoLightly, Doctor Who, Darth Vader and The Dude are depicted in a modern, minimalist style using typography to spell out a quote from the character.

Below are some of my favorites.

Audrey Hepburn as Holly Golightly in Breakfast At Tiffanys: Jeff Bridges as The Dude in the Big Lebowski: David Tennant as The Doctor in Doctor Who: Viggo Mortensen as Aragon in Lord Of The Rings: Daryl Dixon in The Walking Dead: Heath Ledger as The Joker in The Dark Knight: Yoda in The Star Wars franchise: Clint Eastwood in The Good, The Bad and The Ugly: Keanu Reeves as Neo in The Matrix franchise: Marlon Brando as Vito Don Corleone in The Godfather: Robert Downey Jr. as Tony Stark as Iron Man in The Avengers: Arnold Schwarzenegger in The Terminator: James Duval as Frank The Bunny in Donnie Darko: Michael J. Fox as Marty McFly in The Back To The Future franchise: Ayse uses archival pigment inks and prints on archival, heavyweight papers in sizes ranging from 4×6″ to 24×36″. I have shared 24 of my favorites with you in this post, but she has several more. Be sure to check them out at her etsy store, Geek My WalL.

A Pantone Cafe Pops Up In Monaco

An Awesome Tool For Type Lovers: The Clampersand

Stanley Kubrick Revisited. The Films, The Props, The Method and More.