Nervous System has been making puzzles since 2012 with a unique cut style they designed based on crystal formation. The puzzle’s pieces grow into each other, interlocking with shapes similar to dendritic crystals or ice formations. After their Infinity Puzzle* went viral in 2016, they decided to expand their puzzle offerings with a new cut style that featured a different kind of interlocking shape. Geode is their latest series of one-of-a-kind computer generated jigsaw puzzles inspired by the formation of agate.

They created a brand new process for generating jigsaw puzzles they called “Maze” an intricate cut style, with almost twice the number of pieces as our other puzzles. The pieces are so stretched and distorted that it can be hard to distinguish where one ends and another begins. When examined individually, the pieces almost look like strange glyphs from an alien alphabet.

Geode is a jigsaw puzzle inspired by the formation of agate, a colorful banded stone. Each puzzle is unique, emerging from a computer simulation that creates natural variations in the shape, pieces, and image. 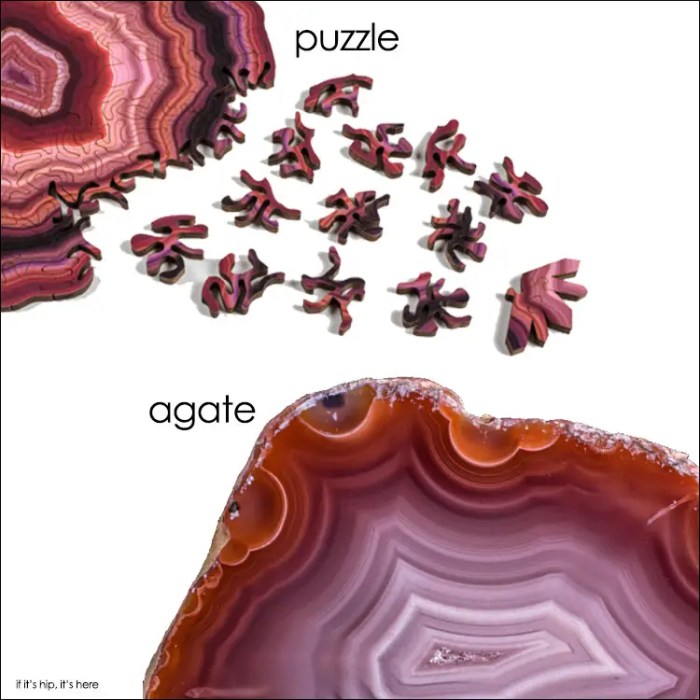 Hundreds of lasercut plywood pieces intertwine to form a challenging, maze-like puzzle. Each geode is a slice of an algorithmic rock. 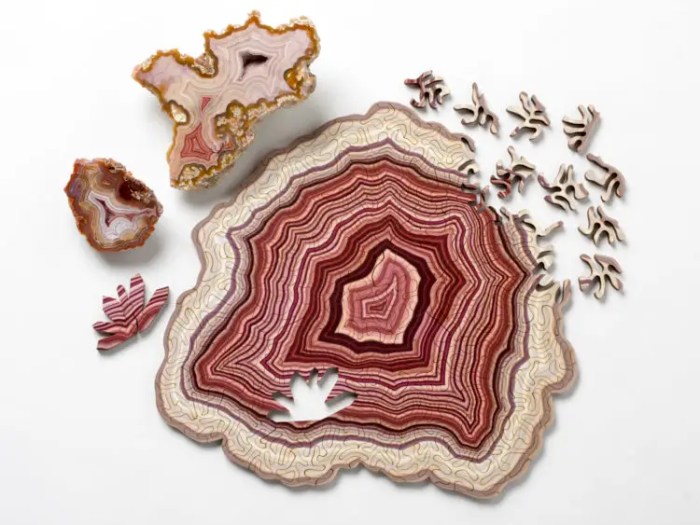 Agates typically form in voids within volcanic stone. Bubbles of gas leave pockets in the rock which fill with a silica-rich solution. Under the right conditions, this silica solidifies into a microcrystalline gemstone called agate. The way it solidifies is really neat. It begins to crystallize from the outside in, with a layer forming first against the chamber wall. Concentric layers of mineral deposition create colorful bands as the chemical composition of the silica gel changes.

The computer generated agates emerge from a similar process as the real thing. First, a chamber is grown (this will be the shape of the puzzle). Then they progressively grow the edge inward, perpendicular to the boundary, until the chamber is filled. Each band of growth exhibits slight changes in growth rate, color, and character, resulting in a unique pattern:

The generated images are like slices of algorithmic rocks, each with its own unique shape and topography of layers that references an artificial geology. The different color families shown below hail from specific geographic locales where the photos were taken, from the reefs of Bonaire to the coast of New England. 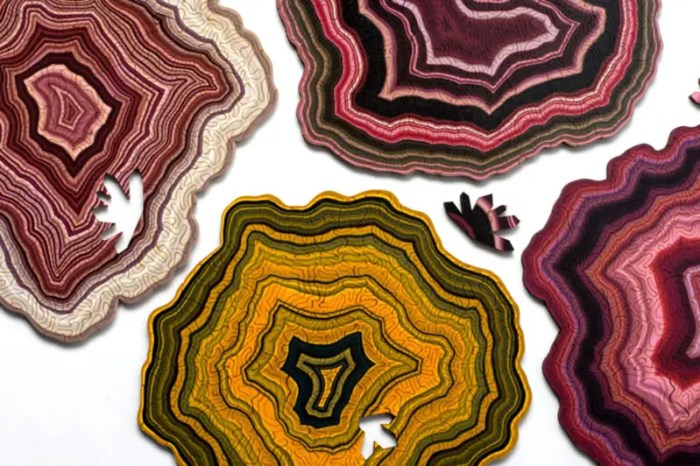 *The Infinity Puzzle is a jigsaw puzzle that tiles continuously. It has no fixed shape, no starting point, and no edges. It can be assembled in thousands of different ways:

Shop for the computer-generated jigsaw puzzles from Nervous System here

Now You Can Laser Engrave Anywhere With Cubiio