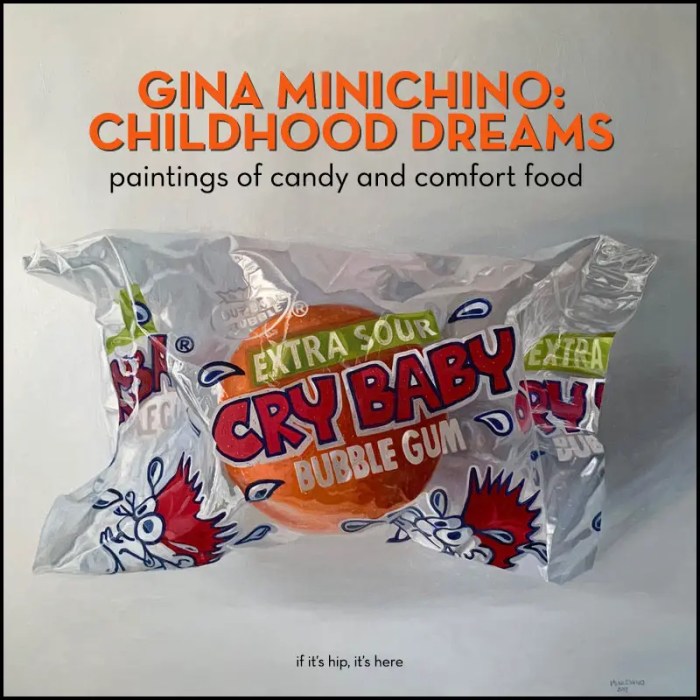 A few years back we introduced you to the work of Margaret Morrison, an artist who paints childhood toys and nostalgic candies photo-realistically in oils. Now meet Gina Minichino, another talented artist who works in oils to depict classic American comfort foods and iconic candy and treats.

In her upcoming show at George Billis Gallery, Gina Minichino: CHILDHOOD DREAMS, the
artist’s small portraits of classic American comfort foods and candy take subjects made popular in Pop Art but are executed with light and composition reminiscent of classic Dutch and Flemish portraits from the 17th century.

The gallery press release:
The exhibition is her second solo with George Billis Gallery LA features the artist’s new oil paintings of classic American food. Minichino is an accomplished realist painter who draws on her technical ability as a painter to create portrait miniatures of classical American food. Her work evokes feelings of familiarity and comfort, as well as solitude and isolation.

While Minichino depicts modern subjects such as junk food, her paintings are influenced by Dutch and Flemish masters’ use of light and space. Similarly, Minichino draws on the 17th Century Dutch still life tradition, which depicted food in a way that almost reified it in sumptuous stillness. Minichino is also influenced by the work of contemporary painter Wayne Thiebaud. Like Thiebaud’s paintings of candy and confections, which convey a simultaneous sense of both exuberance and loneliness, Minichino’s work has a subdued, almost gothic sense of isolation despite its subject matter.

I’ve chosen to focus on subjects that mean something to me. Having grown up with quite a sweet tooth, I’ve indulged in my fair share. Candies, cakes, and bubblegum have always meant moments of happiness and comfort as a child. Now as an adult, though I don’t eat them as much, I have a new relationship with these foods -Gina Minichino

​Artist Statement​: After an education in cartooning at School of Visual Arts in New York City, I started painting. I found I was able to render well, and really got a kick out of painting as photo realistically as I could. Over the years I’ve discovered that being photo realistic doesn’t matter to me much. My desire is to portray my subjects in a realistic way, but I very much like the viewer to get close and see the brush strokes.

I’ve chosen to focus on subjects that mean something to me. Having grown up with quite a sweet tooth, I’ve indulged in my fair share. Candies, cakes, and bubblegum have always meant moments of happiness and comfort as a child. Now as an adult, though I don’t eat them as much, I have a new relationship with these foods.

I examine the packaging and consider the well thought out design that a team of graphic artists had created. I enjoy rendering and recreating the texture of the foods with the contrast of the smooth, shiny or waxy packaging. My works tend to have a quiet contemplative look. My desire is for the viewer to look closely at these objects and possibly see them with a new appreciation, and to preserve the art and design of these iconic products from the time I live in.

Gina Minichino: CHILDHOOD DREAMS is on display at George Billis Gallery in Los Angeles through May 6th, 2019. 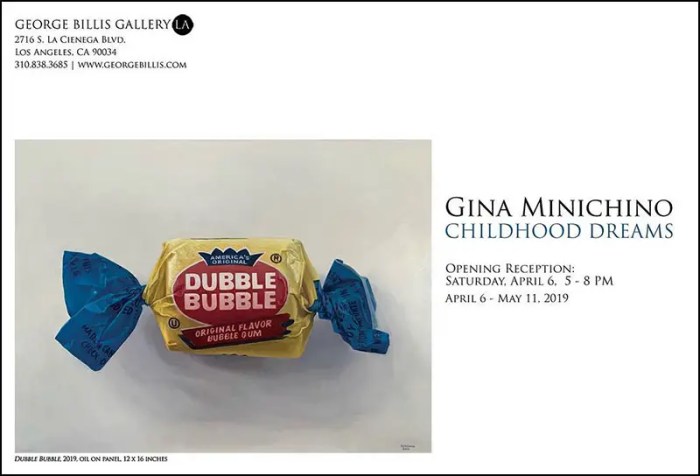 Gina Minichino received her BFA from the School of Visual Arts in New York in 1990 and has exhibited throughout the United States. Her illustration work has been widely published and her paintings most recently appeared in American Art Collector Magazine. She lives and works in New Jersey.

See more of her her wonderful work at her website below:

David Hockney 82 Portraits and 1 Still Life at The Royal Academy.

The Human Form As Seen By Contemporary Sculptor Emil Alzamora in 30 Works.