Herman Miller and Maharam present Irving Harper: A Mid-Century Mind at Play at the Rye Arts Center Gallery through Jan 24, 2015. Curated by Katharine Dufault and Jeff Taylor, the exhibit exposes the world to the paper sculptures by Mid-Century Modern designer and legend Irving Harper.

Most of you have probably never heard of this man, yet as the design director for George Nelson & Associates, Inc (that’s George Nelson, the designer behind such iconic Mid-century modern furnishings such as the Slat Bench and Bubble Lamps) Harper created some of the best collateral work and furniture ever designed.

Irving Harper worked as a draftsman for the Gilbert Rohde’s office during the 1930’s. He and the Gilbert Rohde’s office were responsible for the creation of the Home Furnishings Focal exhibit (among others) at the New York World’s Fair in 1939. After that he worked for Raymond Loewy at the Raymond Loewy Associates office and designed interiors. Irving Harper met George Nelson during the 1940’s and was offered a job by George Nelson in 1947.[source]

Among Harper’s most important designs while at the Nelson Office, is the Herman Miller company logo, and the company’s 1956 Marshmallow sofa and numerous textile designs. His collateral work for Herman Miller, for whom George Nelson was design director, is some of the best mid-century modern print communications ever created.

Irving Harper worked for George Nelson Associates, Inc. for 17 years. During his time with the firm most of Harper’s designs were attributed to George Nelson, as was the company’s practice. John Pile, a designer for the firm in the 1950s, explains, “George’s attitude was that it was okay for individual designers to be given credit in trade publications, but for the consumer world, the credit should always be to the firm, not the individual. He didn’t always follow through on that policy though.”[source]

The Herman Miller site has a fabulous article on Irving Harper’s work for Herman Miller, Irving Harper: The Mediums Beyond the Message  which shows some of his collateral work created during his near two-decade reign as design director at the Nelson Office. Irving Harper put his mark on Herman Miller, not only by creating the company’s now famous logo, but also by embodying an ethos of total design.

The original Herman Miller logo designed in 19547 was a stylized M with wood grain because so many of the items were made from wood. Later it evolved into a solid version:

In 2001, Pavement and China Shop, two patterns designed by Harper were re-issued for Maharam’s Textiles of the 20th Century line

Irving Harper’s home is filled with his own creations as you can see from his living room, dining room and bathroom shown below. 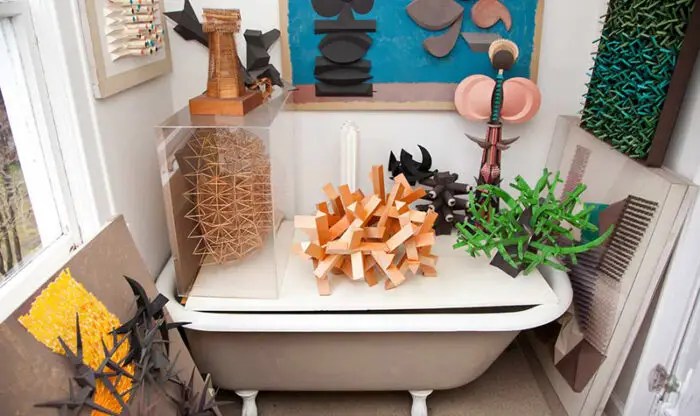 Known professionally for his iconic contributions to the George Nelson Office, Harper’s personal creations have never before been shared publicly.

Thanks to the Rye Arts Center, I can share with you photos of his incredible paper works and of the artist himself taken in his own home. Please note that I have altered most of these images, which I have shared with you from the Rye Arts Center website. They have been cropped, sharpened and color corrected for better viewing. A few images are stills I took from Herman Miller’s short film on Irving shown at the end of this post. 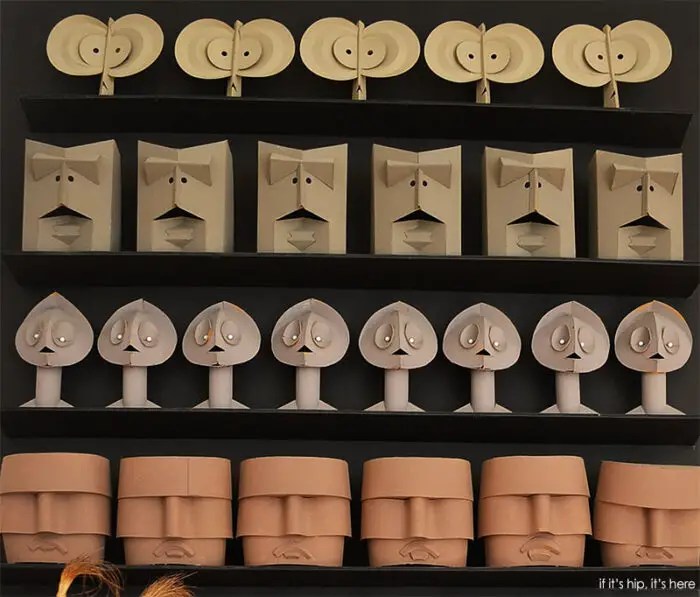 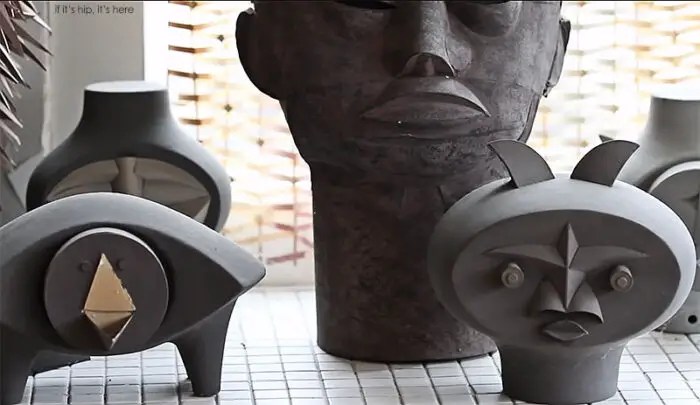 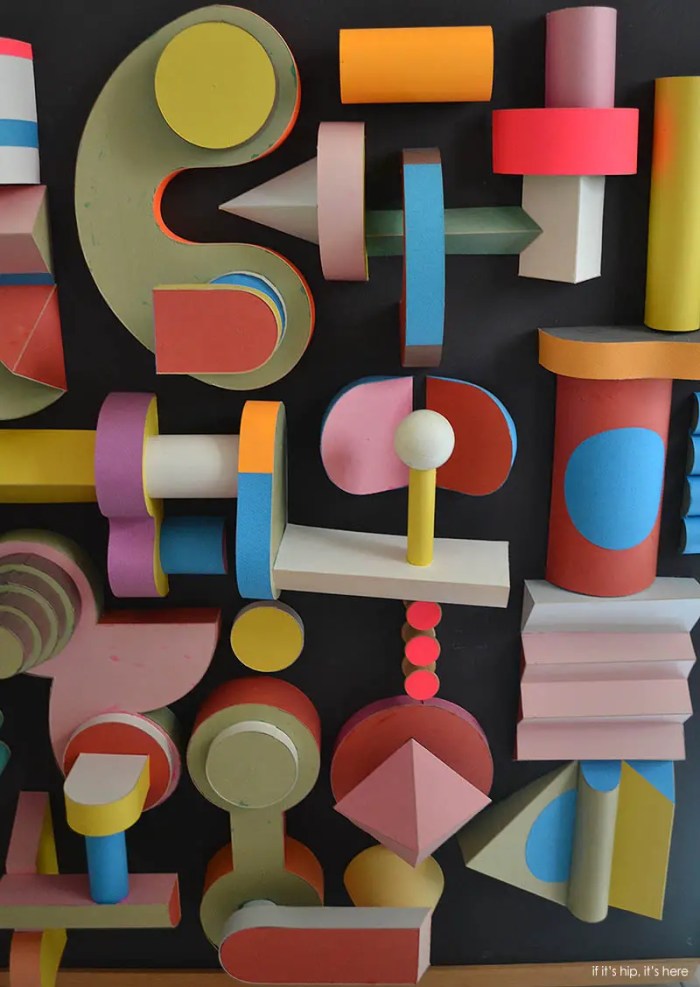 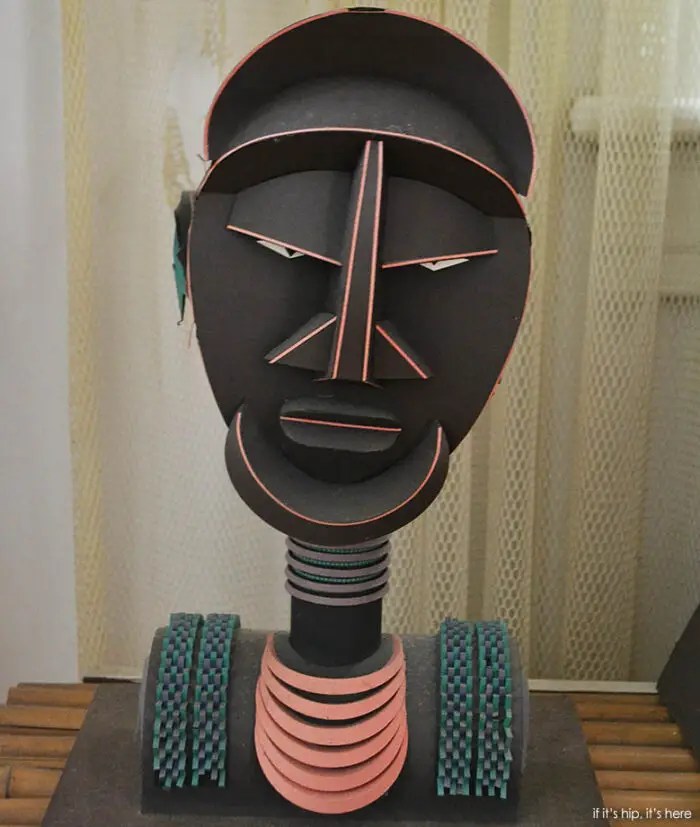 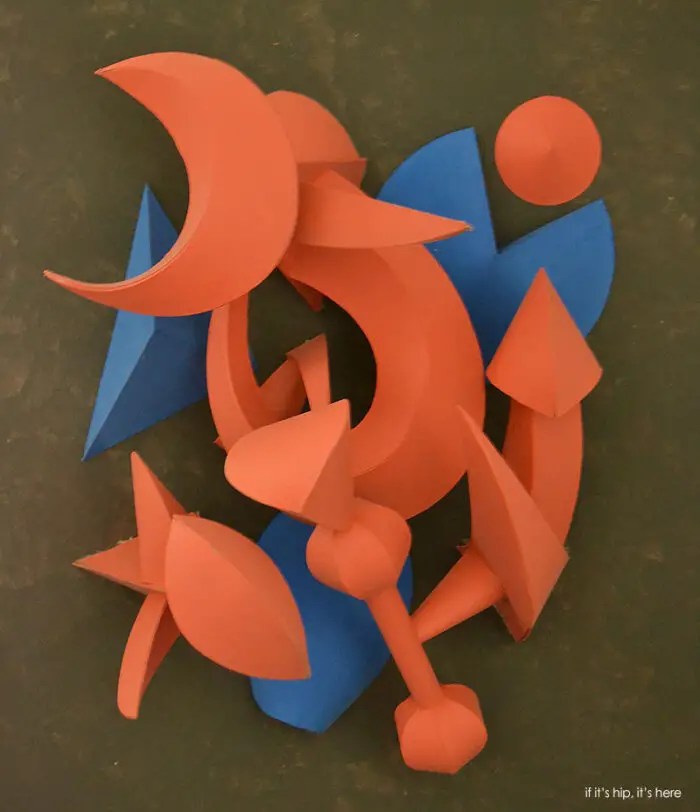 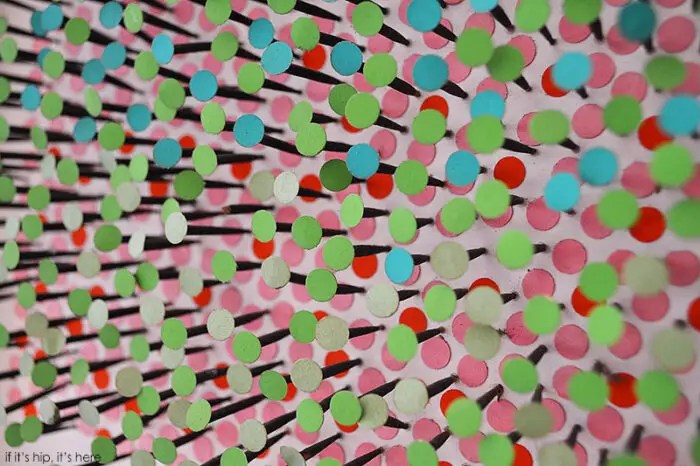 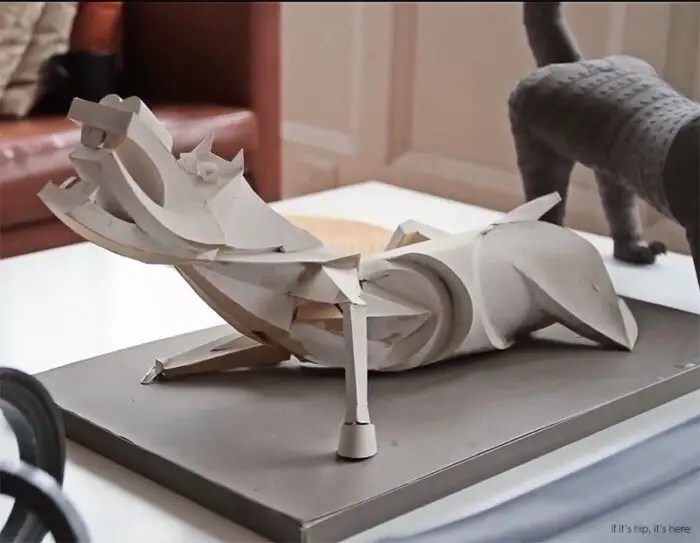 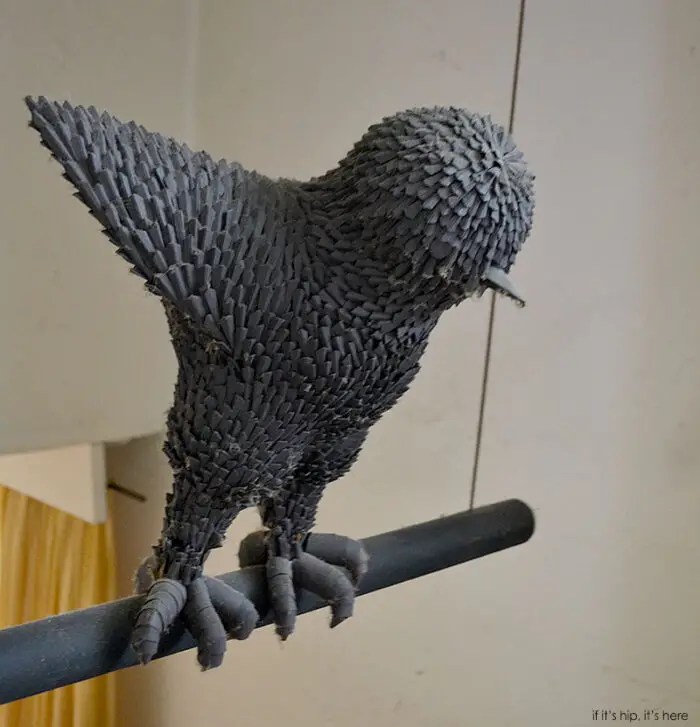 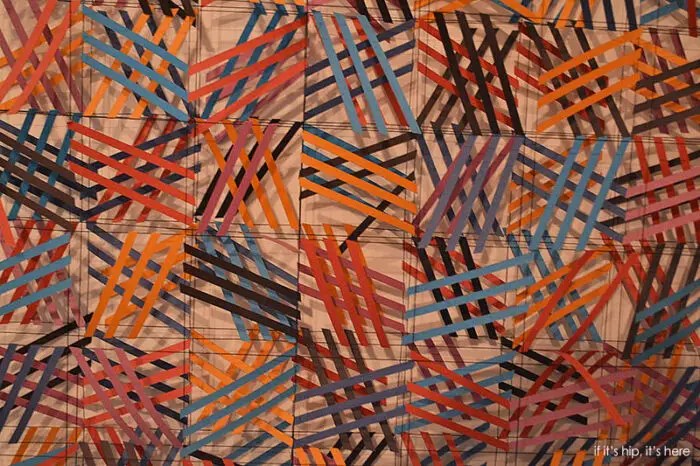 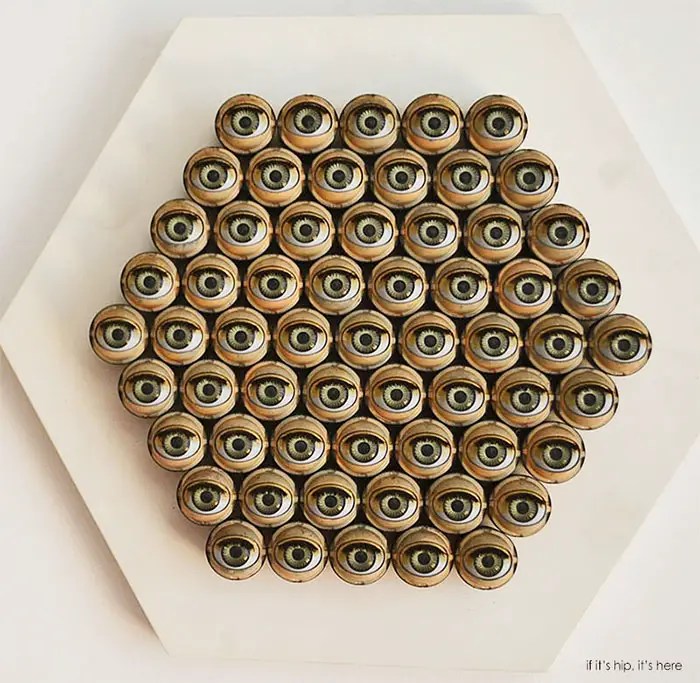 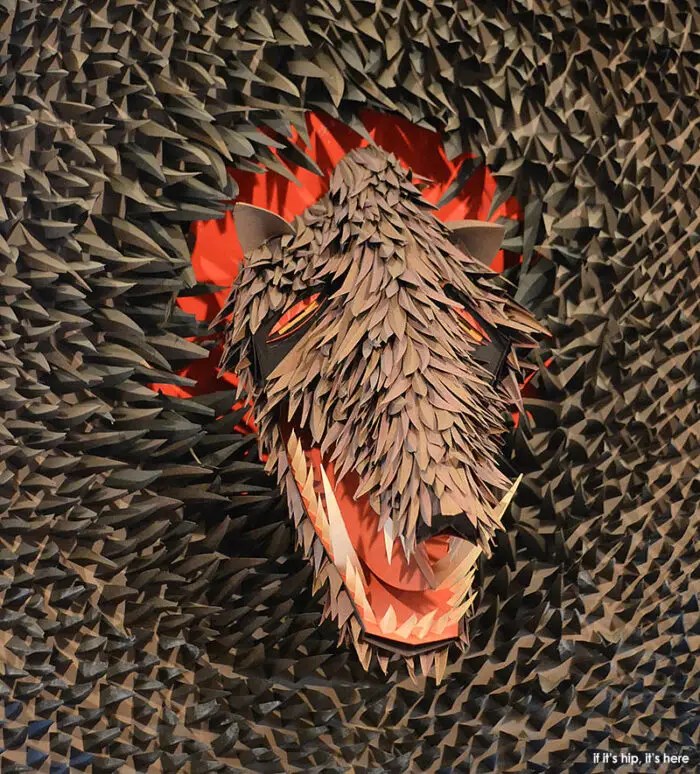 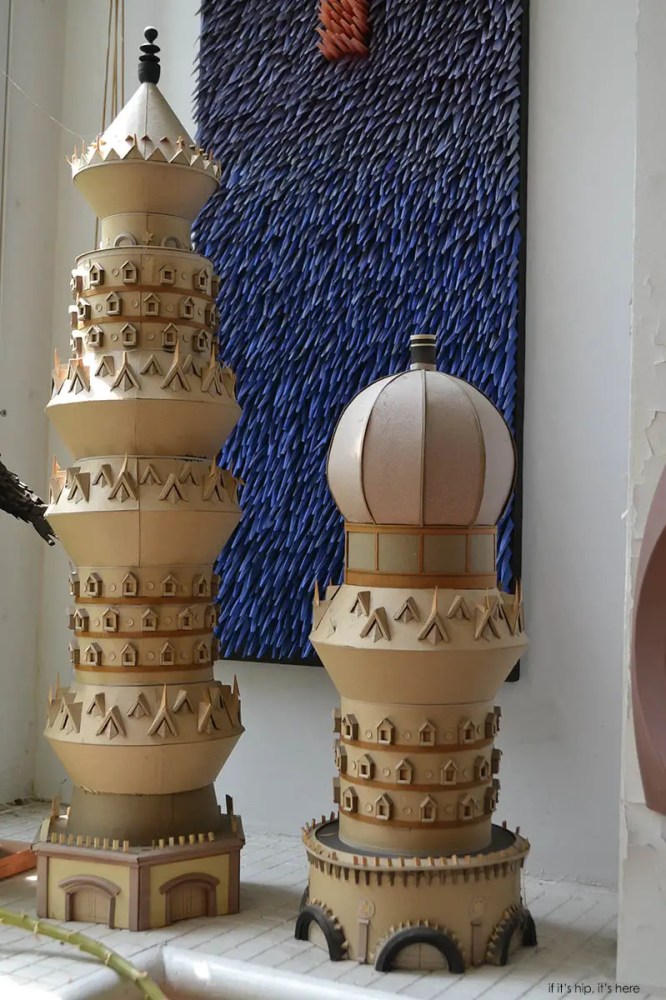 The artist’s workspace at home: 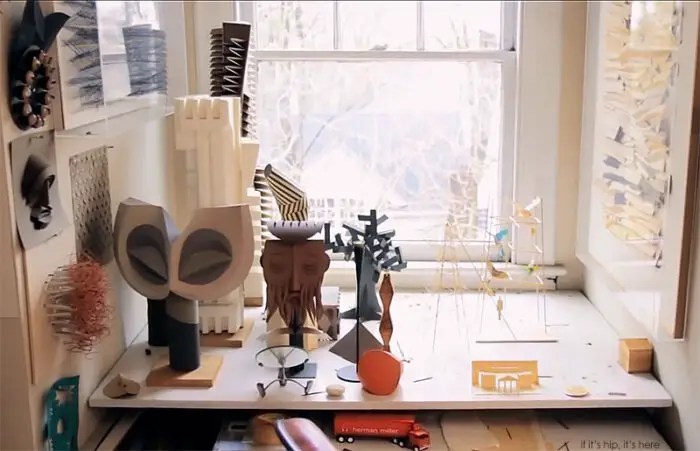 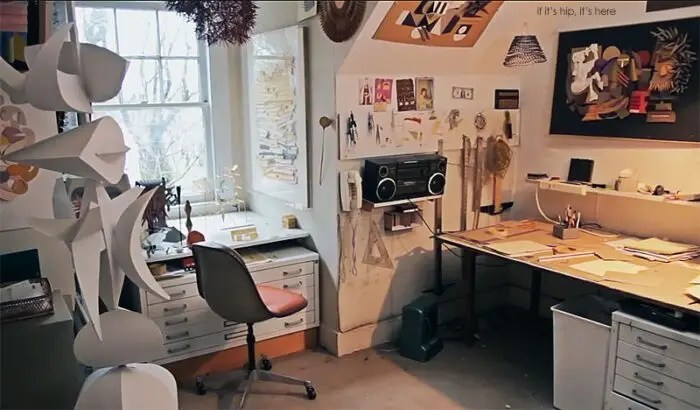 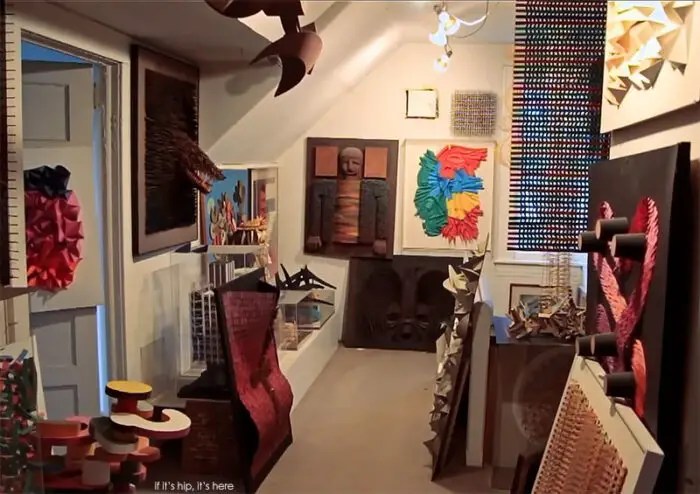 Irving Harper: Paper is A Versatile Medium by Herman Miller:

The exhibit of Harper’s works at the Rye Arts Center has been extended to run through January of 2015 due to popular demand. 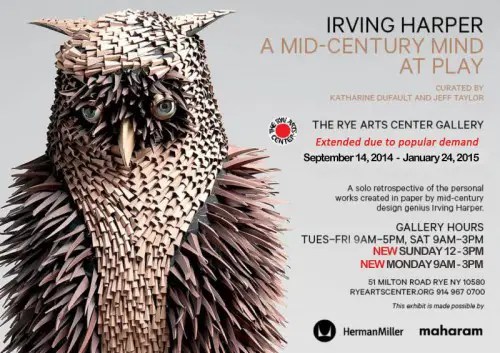 A book of these works has been released and is available here.