The End. We’ve reached it. As we put another year behind us I thought a look at THE END, literally, would be a great way to wrap up the year. And thanks to American artist Ed Ruscha, and his creative depictions of the two words, we have plenty of beautiful examples.

“The End” paintings and works on paper are an important body of work by American Pop artist Ed Ruscha. Depicting final film frames, he presents the words ‘The End’ in various calligraphies sprawled against monochromatic backdrops. Executed as paintings, works on paper, mixed media. lithographs and even as video, the artist’s depictions emulate projections of old, poorly-preserved film reels.

The artist first began working on these pieces in Venice, California in 1991 when he created The End #1. Ruscha continued with variations on the theme through 2006 with the production of The End #66.

Writer Mary Richards adds that the series “shows a fascination for the material aspect of cinema. The idea of ‘scratches on the film’ recalls 1960s works by experimental film-makers such as Stan Brakhage and Bruce Conner, whose scratched, painted and collaged negatives created extraordinary effects” (Mary Richards, Ed Ruscha, London 2008, p. 119). “In other words, The End #37 (below), with its cloudy lettering and vertical abrasions creates the illusion of capturing a film’s last still as it slowly fades away, which metaphorically evokes the gradual obsolescence of the medium of film as well as the desuetude of the genre of experimental film today.” says Mary Richards.

“There are things that I’m constantly looking at that I feel should be elevated to greater status, almost to philosophical status or to a religious status. That’s why taking things out of context is a useful tool to an artist. It’s the concept of taking something that’s not subject matter and making it subject matter.” —Ed Ruscha

‘I like the idea of a word becoming a picture, almost leaving its body, then coming back and becoming a word again,’ Ruscha once said. ‘I see myself working with two things that don’t even ask to understand each other.’

In a 2013 profile in The New Yorker his early paintings are described as ‘not pictures of words but words treated as visual constructs’. (source: Christies)

Other “END” Paintings by Ed Ruscha:

Ed Ruscha was interviewed by Marc-Christoph Wagner at his studio in Los Angeles, USA in January 2016, for Denmark’s Louisiana Museum of Modern Art:

About The Artist
At the start of his artistic career, Ed Ruscha called himself an “abstract artist … who deals with subject matter.” Abandoning academic connotations that came to be associated with Abstract Expressionism, he looked instead to tropes of advertising and brought words—as form, symbol, and material—to the forefront of painting. Working in diverse media with humor and wit, he oscillates between sign and substance, locating the sublime in landscapes both natural and artificial.

In 1956, Ruscha moved from Oklahoma City to Los Angeles, where he attended the Chouinard Art Institute. During his time in art school, he had been painting in the manner of Franz Kline and Willem de Kooning, and came across a reproduction of Jasper Johns’s Target with Four Faces (1955). Struck by Johns’s use of readymade images as supports for abstraction, Ruscha began to consider how he could employ graphics in order to expose painting’s dual-identity as both object and illusion. For his first word-painting, E.Ruscha (1959), he intentionally miscalculated the space it would take to write his first initial and surname on the canvas, inserting the last two letters, HA, above and indicating the “error” with an arrow. After graduation, Ruscha began to work for ad agencies, honing his skills in schematic design and considering questions of scale, abstraction, and viewpoint, which became integral to his painting and photography. He produced his first artist’s book, Twenty-Six Gasoline Stations—a series of deadpan photographs the artist took while driving on Route 66 from Los Angeles to Oklahoma City—in 1963. Ruscha since has gone on to create over a dozen artists’ books, including the 25-foot-long, accordion-folded Every Building on the Sunset Strip (1966) and his version of Kerouac’s iconic On the Road (2009). Ruscha also paints trompe-l’oeil bound volumes and alters book spines and interiors with painted words: books in all forms pervade his investigations of language and the distribution of art and information.

Ruscha’s paintings of the 1960s explore the noise and the fluidity of language. With works such as OOF (1962–63)—which presents the exclamation in yellow block letters on a blue ground—it is nearly impossible to look at the painting without verbalizing the visual. Since his first exhibition with Gagosian in 1993, Ruscha has had twenty-one solo exhibitions with the gallery, including Custom-Built Intrigue: Drawings 1974-84 (2017), comprising a decade of reverse-stencil drawings of phrases rendered in pastel, dry pigment, and various edible substances, from spinach to carrot juice. The first retrospective of Ruscha’s drawings was held in 2004 at the Whitney Museum of American Art. Ruscha continues to influence contemporary artists worldwide, his formal experimentations and clever use of the American vernacular evolving in form and meaning as technology and internet platforms alter the essence of human communication. Ruscha represented the United States at the 51st Venice Biennale (2005) with Course of Empire, an installation of ten paintings. Inspired by nineteenth century American artist Thomas Cole’s famous painting cycle of the same name, the work alludes to the pitfalls surrounding modernist visions of progress. In 2018 Ruscha’s Course of Empire was presented concurrently with Cole’s at the National Gallery in London. (source: Gagosian Gallery) 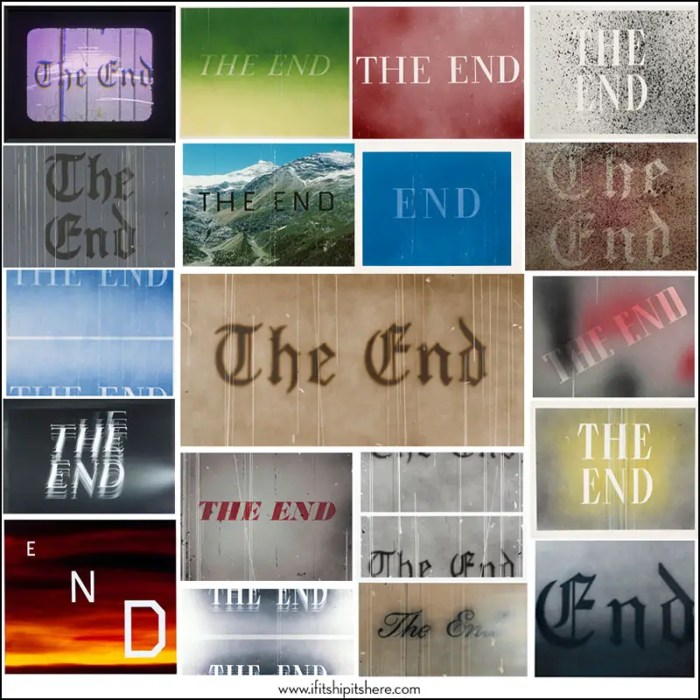 images in this post courtesy of The Tate, Gagosian Gallery, Ed Ruscha and Artnet

Also worth noting, given the subject is this fun Pinterest board by Spiro Carros of Cinema End Frames

In Honor Of Turkey Day, 18 Works of Art Inspired By The Wishbone.