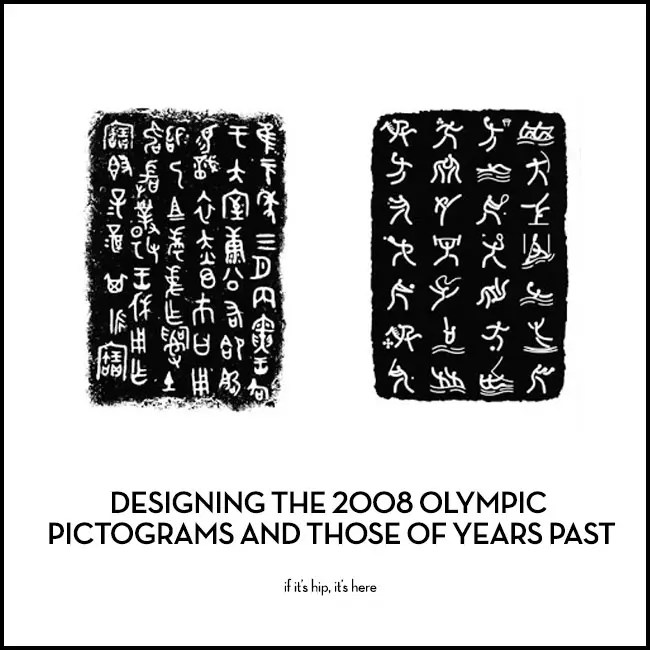 above left: Inscriptions on the Gui bronze vessels; above right: Pictograms of the Beijing 2008 Olympic Games, Photo and graphic courtesy of ARCOG

Graphic designers had to consider how to create a look that represented China, but also how to design images that would be attractive to an international audience, ARCOG (the Art Research Center for the Olympic Games) deputy director Hang Hai explains. above: Wang Min, Design Director of the 2008 Beijing Olympics

“We had to walk the line between East and West in the design process,” Wang Min, the dean of the school of design at CAFA, explains. “What we had to bear in mind is not to turn the Beijing Olympic Games entirely into a celebration of Chinese culture. It needed to have a global feel.” above: Designers working at the Art Research Center for the Olympic Games, Photo and graphic courtesy of ARCOG

The team designed simple but aesthetic patterns, based on jingwen, the script found on 2,000-year-old bronze carvings to represent 35 different Olympic sports and 20 Paralympic sports displayed in “pictograms”.

“The images are a distinct form of traditional Chinese art, revealing the concept of gangrou bingji, or coupling hardness and softness,” Hang says, “It is like doing taichi, even though the movement is slow and peaceful, it requires a certain strength.”

above: the final pictograms

Unlike commercial design companies, the atmosphere at ARCOG is less high pressured and more academic. Many staff like to address their team leaders as “teacher” rather than “boss”.

Hang expresses his appreciation for all the ARCOG team members. “There is no need to push hard on my students. As artists, they will throw themselves entirely into the artwork.”

Some 200 CAFA undergraduate and postgraduate students signed up for Olympic-related graphic design projects, but many of them quit or a few found jobs upon graduation. For most, the design process -complicated by the inordinate attention focused on the Beijing Olympics – proved to be too tedious to bear, according to Hang. That is why there are only 20 full time designers on the team, he adds.

The study of graphic design has risen dramatically in the country. In the past decade, the number of design schools and programs has grown to more than 1,000.

Pictograms from some past Summer Olympics: 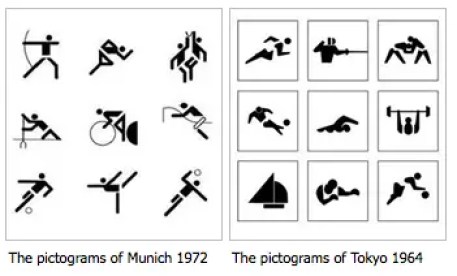 And some winter Olympic pictograms of years past: