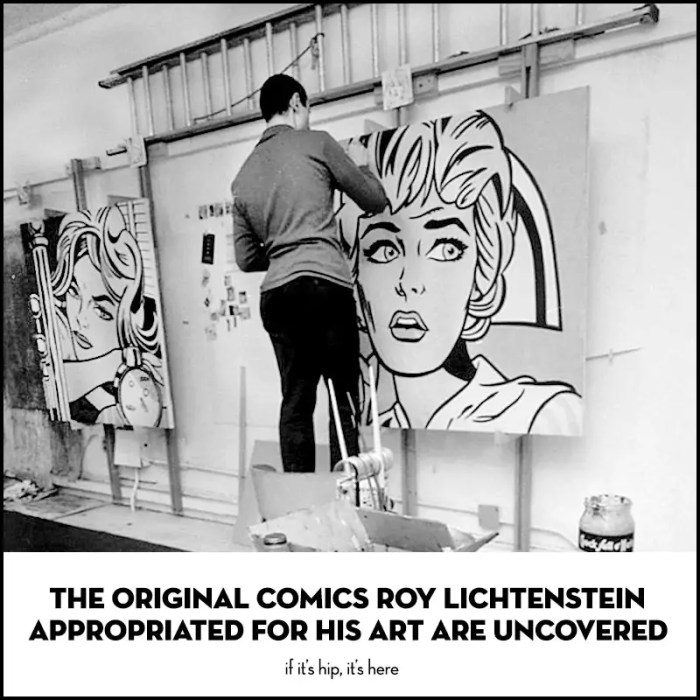 Did you know that artist Roy Lichtenstein, world-renowned for his tongue-in-cheek Ben-Day dotted paintings, was one of the art world’s biggest copycats? Albeit several artists work is inspired by other artworks, Lichtenstein’s ‘comic strip’ art was predominantly taken directly, including much of the text, from the work of several popular and prolific comic book artists such as Arthur Peddy, Tony Abruzzo, Ted Galindo, Jack Kirby, John Romita, Mike Sekowsky and Jim Pike. None of whom he ever credited.

Deconstructing Roy Lichtenstein is an exhaustive, three decade long project by Art Historian David Barsalou in which he has located the original source material for much of the famous Pop Artist’s work.

Although Lichtenstein’s copying of comic-book panels using his signature Ben-Day dot technique, which began with his 1961 painting Look Mickey! (shown below), largely ceased in 1965, it’s during this period in which he produced his most famous works.

For decades now David Barsalou has collected the source material for much of the famous Pop Artist’s work and places the original comic strip art side by side with Lichtenstein’s now iconic works. He has amassed a phenomenal  80+ pages of material on his flickr site.

Even the artist’s most famous works, Whaam! and Drowning Girl (both done in 1963) are recreations of comics drawn by other artists.

This is not news to comic-enthusiasts and several artists, many of whom find Lichtenstein’s “inspiration” nothing short of plagiarism, as expressed in Hugh Brown’s print below. However, many others disagree as you can read  here and here

Lichtenstein himself admitted, according to author Nathan Dunne, “I am nominally copying, but I am really restating the copied thing in other terms. In doing that, the original acquires a totally different texture. It isn’t thick or thin brushstrokes, it’s dots and flat colours and unyielding lines.”

For Drowning Girl Lichtenstein cropped the cover image above dramatically, showing the girl alone and encircled by a threatening wave. He changed the caption from “I don’t care if I have a cramp!” to “I don’t care!” and the boyfriend’s name from Mal to Brad.

Whaam! adapts a comic book panel illustrated by Irv Novick from the Feb 1962 “Star Jockey” story from issue No. 89 of DC Comics’ All-American Men of War. The original forms part of a dream sequence in which fictional World War II P-51 Mustang pilot Johnny Flying Cloud, “the Navajo ace”, foresees himself flying a jet fighter while shooting down other jet planes.

In Lichtenstein’s painting, both the attacking and target planes are replaced by different types of aircraft. Paul Gravett suggests that Lichtenstein substituted the attacking plane with an aircraft from “Wingmate of Doom” illustrated by Jerry Grandenetti in the subsequent issue (#90, April 1962),  and that the target plane was borrowed from a Russ Heath drawing in the third panel of page 3 of the “Aces Wild” story in the same issue No. 89.  The painting also omits the speech bubble from the source in which the pilot exclaims “The enemy has become a flaming star!” (source: Wikipedia)

“The things that I have apparently parodied I actually admire,” said Lichtenstein. 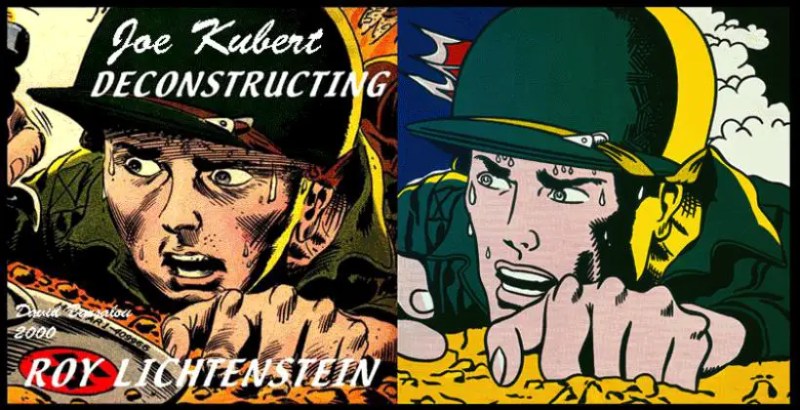 David Barsalou’s diligent research is mind-blowing. You could spend all day looking through his source material. On his Facebook page, Barsalou has been deconstructing the work of Mel Ramos for the past several months. I smell a new project in the works.

Nonpareil Pet Portrait. One Sweet Beagle Made of 221,184 Colored Sprinkles.