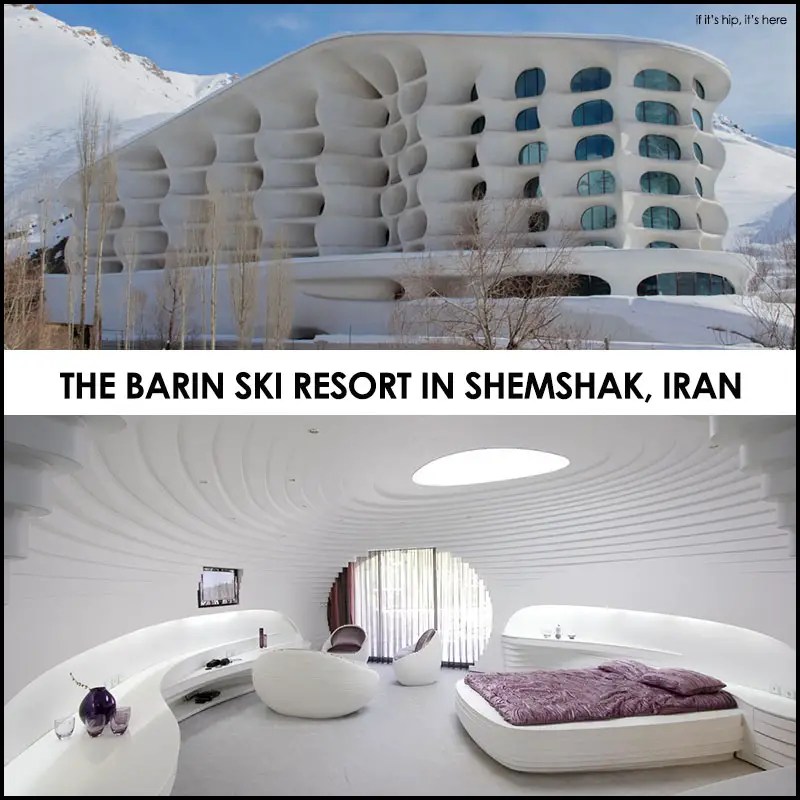 While the exterior of the Barin Ski Resort was designed to blend into the snow covered landscape, the interior offers a modern igloo-like refuge. Designed by RYRA studio, the 60 square meter building with it’s topographical like interior walls and ceilings, is nine stories tall and began in 2008 and was completed in 2011. Without a right angle in sight, the interior is filled with skylights, curved halls and doorways, built-in seating and modern furnishings designed to match the interior surfaces. The architects describe the project as follows:
“In the fall 2008 we started designing interior of Barin ski resort at the same time we were working on the exterior of the project. Firstly we chose a 60 m² unit, which is the most frequent one in complex, to design as a showcase room. Barin is located in the heart of mountain, in Shemsak ski resort (the second largest ski area in Iran) with such a unique nature that we decided to take this project as a demonstration one that investigates the interface between nature and architecture. The dialogue between architecture and nature is as old as architecture itself, so it took different forms according to the concepts and paradigms ruling each period. In the traditional period, architecture was always linked with nature by the beginning of the modern movement, the relation between architecture and nature took a different form. This project aims to show new ideas that help in modifying the relation between architecture and nature without blindly repeating vernacular models or copying imported historical styles .It aims to reach that the logic product of any architectural design process should be free and flexible formation responding to the surrounding forces. Natural forces here were Snow-covered landscapes as the characteristic feature of the region and the fluid lines of mountain embracing the building. In design process we were also inspired by Igloos, the shelters which are built by native arctic residents’, but here topographic layers instead of ice blocks are put on each other horizontally to make a domical form. Thereupon this was a Combined Metaphoric Design which used both natural and human-made objects as inspiration sources to achieve its final form.” Kartell’s Bourgie Lamp Reimagined by 14 Designers for the 10th Anniversary.