A new pair of kicks is about to be released. A collaboration between Boston’s Bodega and Amsterdam’s footwear brand Filling Pieces, the Ceramic Mountain Cut sneakers were designed to look like 14th Century blue and white Chinese pottery or ceramics. The shoes launch on May 7th and are expected to sell out quickly. The following text is from their press release
While the mania that sneaker culture can whip up for certain hype product releases can be, to put it diplomatically, a bit much, the “what’s the world coming to” moral panics that follow every release are equally, if not more ridiculous. Not to mention, this kind of hand wringing is spectacularly short sighted. The historical craze for blue and white porcelain puts the most ludicrous eBay listing or line up fisticuffs to shame.

Intricately ornamented, blue and white porcelain had been a part of Chinese pottery since the 14th century. The designs proved to be popular in their native country, and a successful cross cultural export with the Middle East as well. (The blue cobalt used in the production came from modern-day Iran.) The export business hadn’t seen anything just yet though. 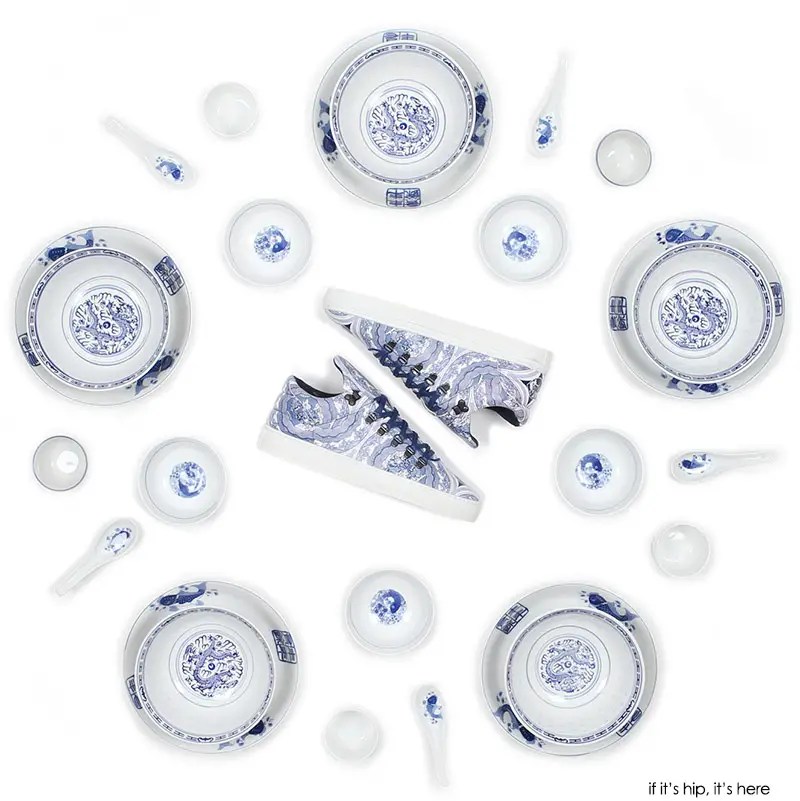 The exquisite blue and white creations started making their way into Europe by way of the normal trade routes, but it was an act of nautical hostility that touched off a full-scale mania for porcelain on the continent. In the early 1600s, two Portuguese cargo ships were captured at sea by the Dutch, and their contents were auctioned off. Among the items these ships happened to be carrying were thousands of blue and white porcelain pieces from China. James I and Henry IV, better known as the kings of England and France, respectively, were counted amongst the buyers. (And you thought trying to compete against resellers was bad.) The clamor for porcelain would reach such a fever pitch that “china” would become the generic term for these ornamental ceramics.

Far Eastern trading companies were established; the porcelain producing Chinese city of Jingdezhen developed a specialty export market, in an attempt to satisfy a demand that continued, unabated into the next century. Customers could even submit their own design, most commonly a family coat of arms, to be produced on porcelain pieces, prefiguring the customization trend in footwear by a few hundred years. When the demand for Chinese porcelain finally did die down, it wasn’t because people were no longer interested; it was because some of the earliest known industrial espionage had taken the production methods of Jingdezhen back to Europe. The objet d’art is a human impulse, but it can be a polarizing one. The ability to appreciate an item purely in terms of its subjective, aesthetic beauty rather than what practical use it may possess can be viewed as fanciful, decadent luxury, or it can be viewed as the difference between being alive and living.

Boston’s Bodega and Amsterdam’s Filling Pieces have joined forces to take blue and white porcelain on another journey, not just across the ocean, but across cultures. The locales commonly associated with Jingdezhenware: antique shops, museums, the lavish homes of the impossibly rich, are not considered simpatico with the world of sneakers and streetwear, where an overwhelming emphasis is placed on youth and up to the moment modernity. Neither Bodega nor Filling Pieces have gotten to where they are by being content with doing things the usual way. So, as the trading ships of old introduced porcelain to an amazed and adoring audience bringing a traditional Asian motif to the contemporary style of the Mountain Cut silhouette is just an opportunity for this classical beauty to be enjoyed in a new form. After all, everyone deserves a chance to appreciate the finer things in life. The Bodega x Filling Pieces Ceramic Blue Mountain Cut releases in limited numbers on May 7th, 2016, retailing for $250 and available exclusively through Bodega and bdgastore.com