Bear Run Cabin located in Marblemount, WA and designed by David Coleman Architecture is my kind of cabin. Although located in a rugged and rustic environment, it is anything but. 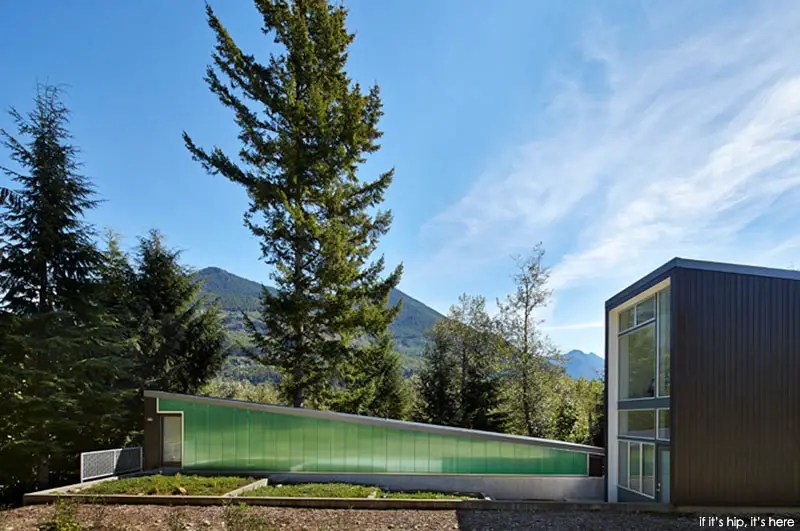 The cabin consists of two buildings set in a ying/yang fashion within a 30’ by 100’ perimeter site. There’s an 890 sq foot cabin in frameless glass and a 1,000 sq foot studio. The Cabin has a great room, kitchen and loft. The Studio has a with music room and workshop. Both each have one bedroom and one bathroom. All rooms open toward distant views of the mountains and the entirety of the property has geothermal heat and super insulation. 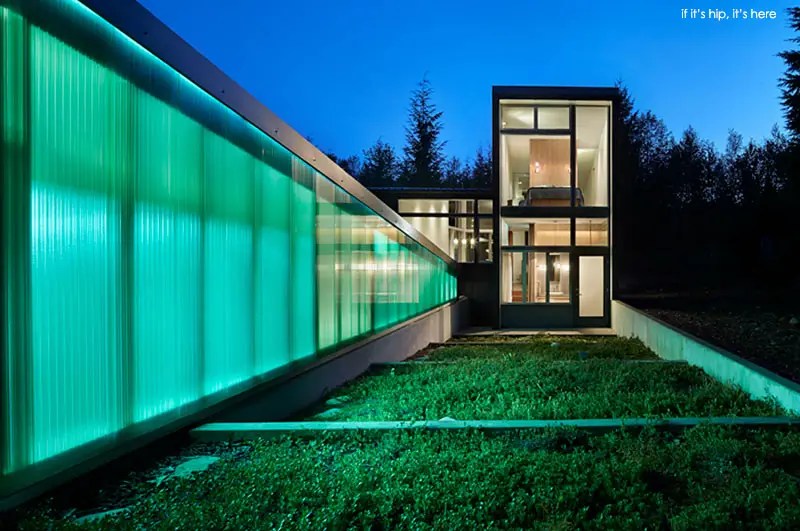 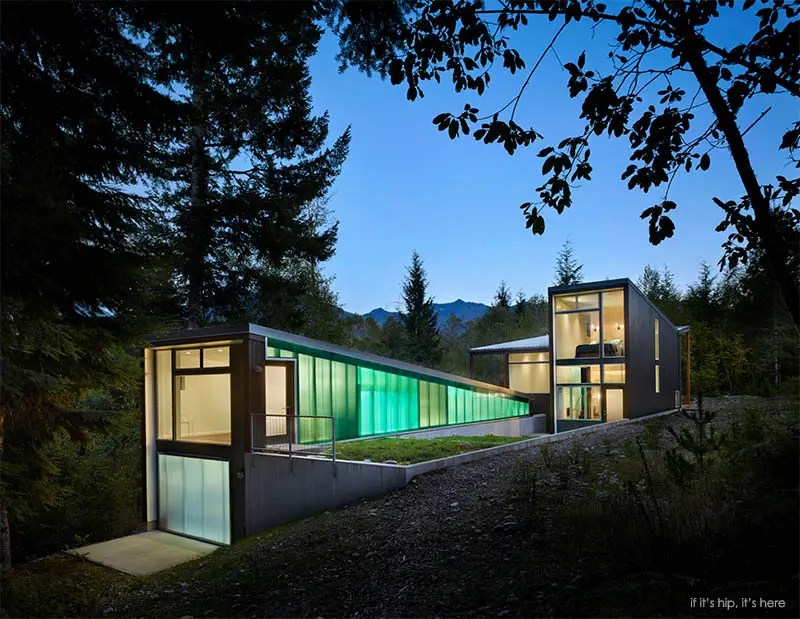 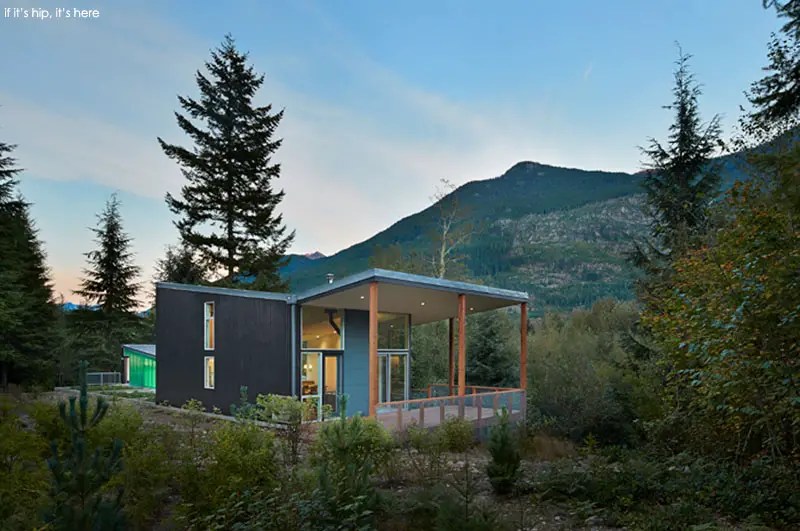 The following copy is from the architect:
Located on a rain-drenched site in the rugged, northwestern foothills of the Cascade Mountains, this modest, sustainable building has a big presence in a big landscape. Surrounded by dramatic, distant peaks, the site slopes gently to the east and overlooks a large woodlot. Our clients wanted a building that had presence in and subservience to the wild landscape. This duality became the thematic tag that informed the design. Two buildings are juxtaposed within this footprint, leaving a sinuous exterior space that is defensible and varied. The western terrace is carved into the site, stepping down into the earth, leading toward a soaking tub set behind a glass wall. The south-eastern porch and monumental stair, both covered by a soaring roof, rise above the site, offering shelter from the rain and summer sun. Both spaces meet in an interstitial “rain garden” – a place where seasonal rains gather and flow toward the river below. 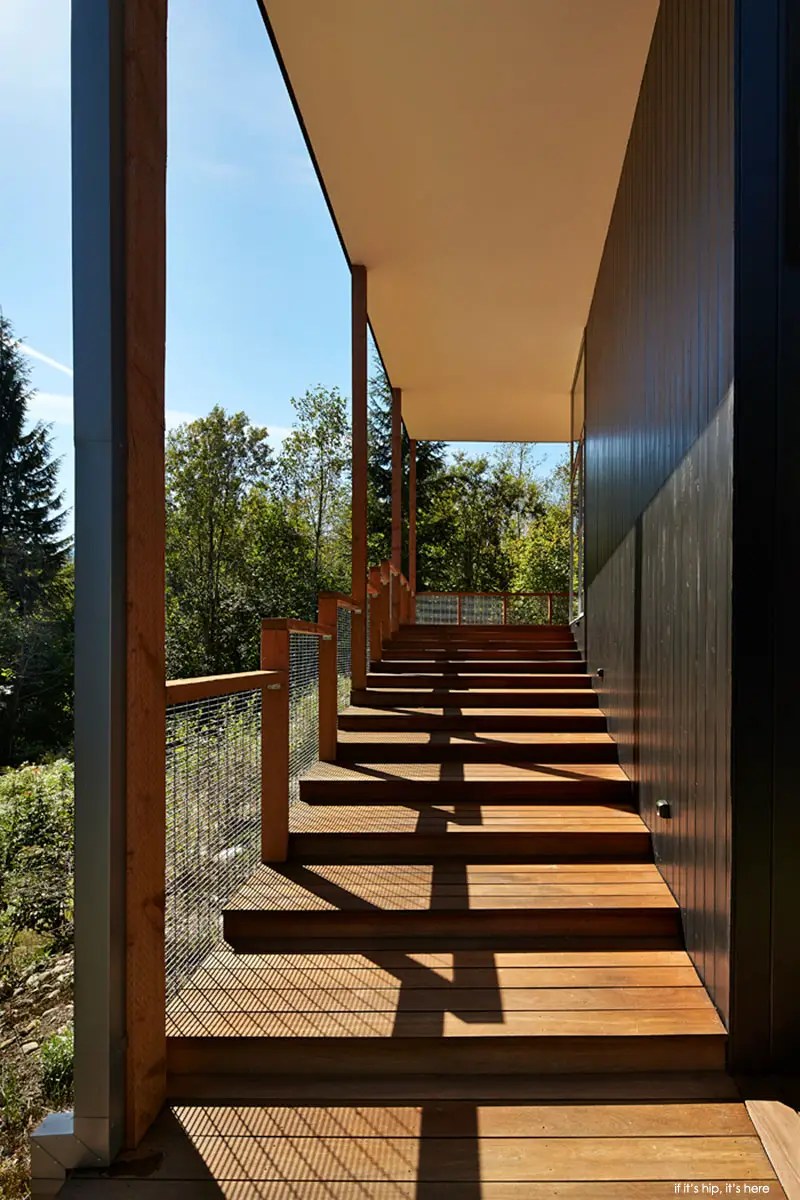 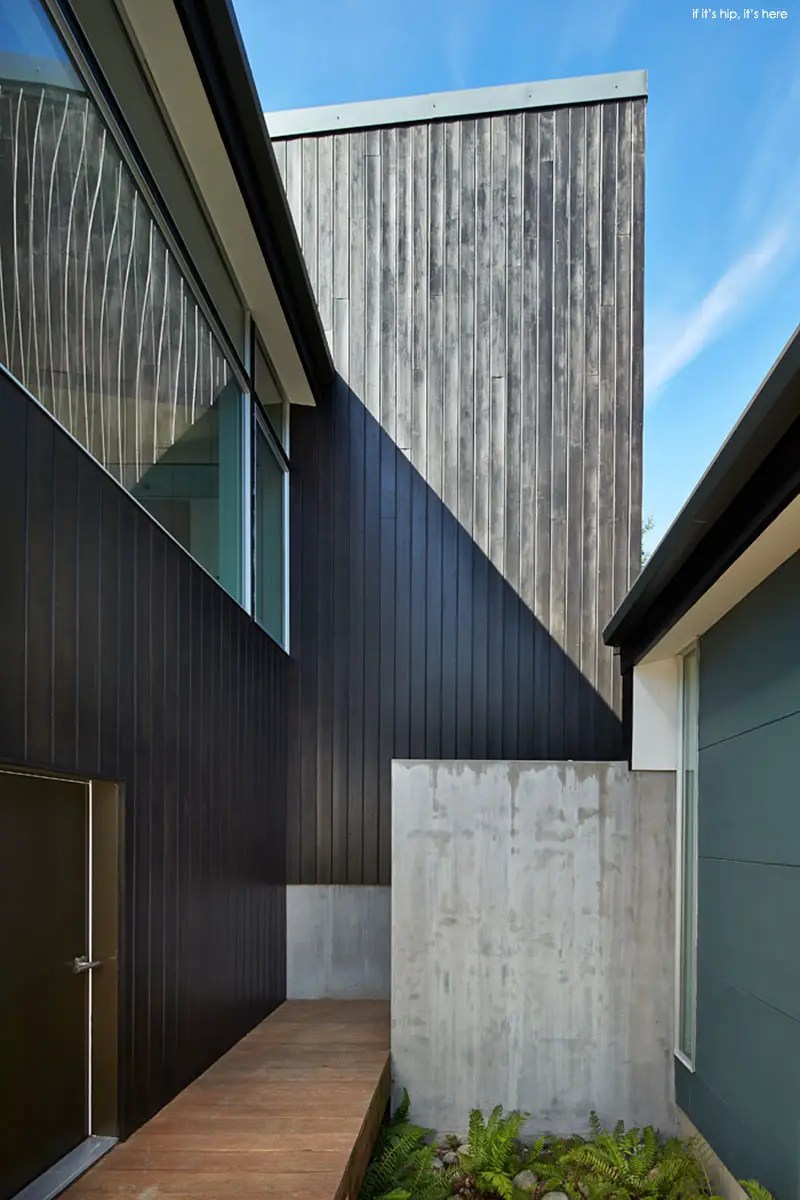 The building is designed to be seasonally expansive – generous in summer when livability expands outside onto the porches and terraces, modest and efficient in winter when the winter rains set in. The 890 SF cabin houses a great room, bath and sleeping loft clad in frameless glass. 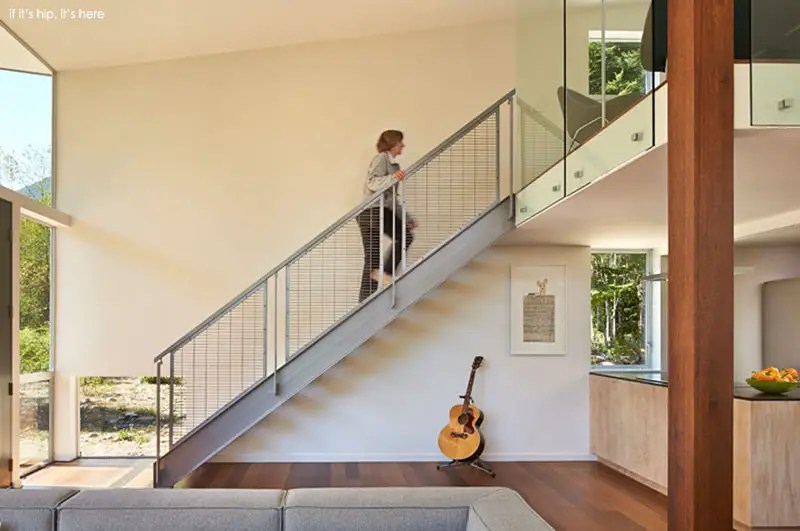 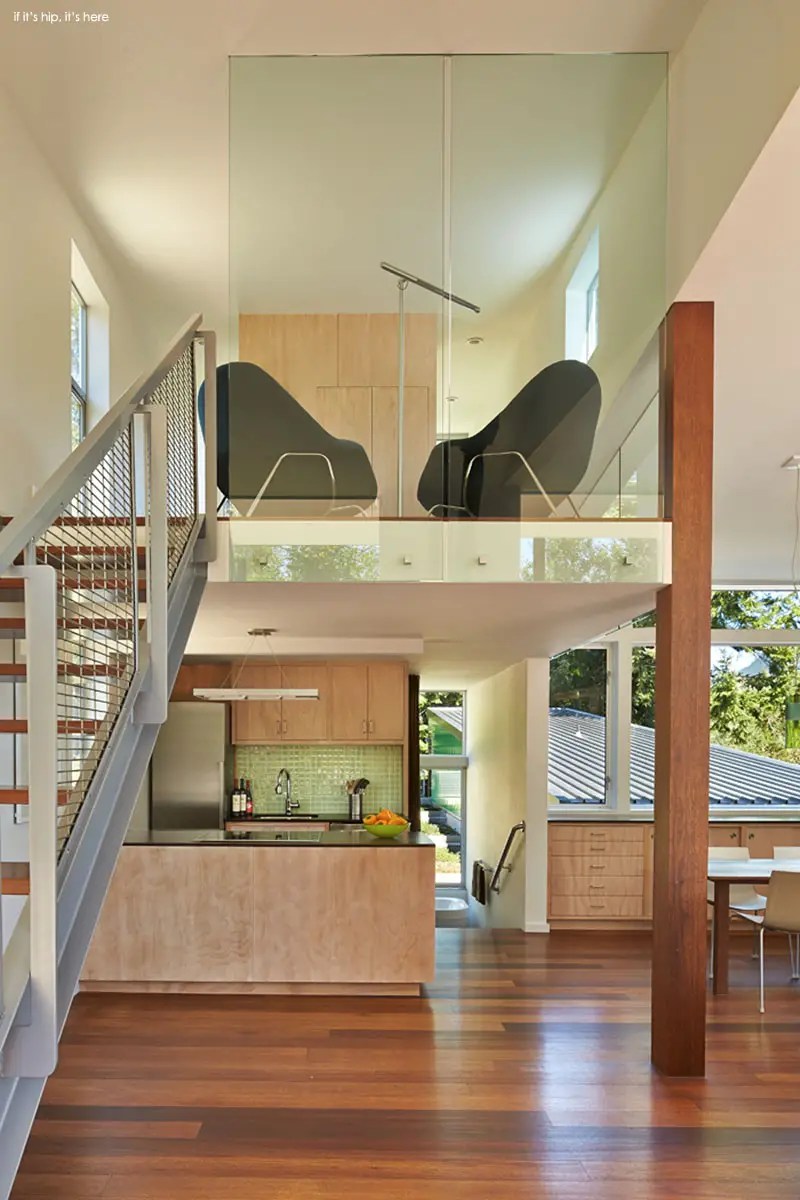 All rooms open toward distant views of the mountains. 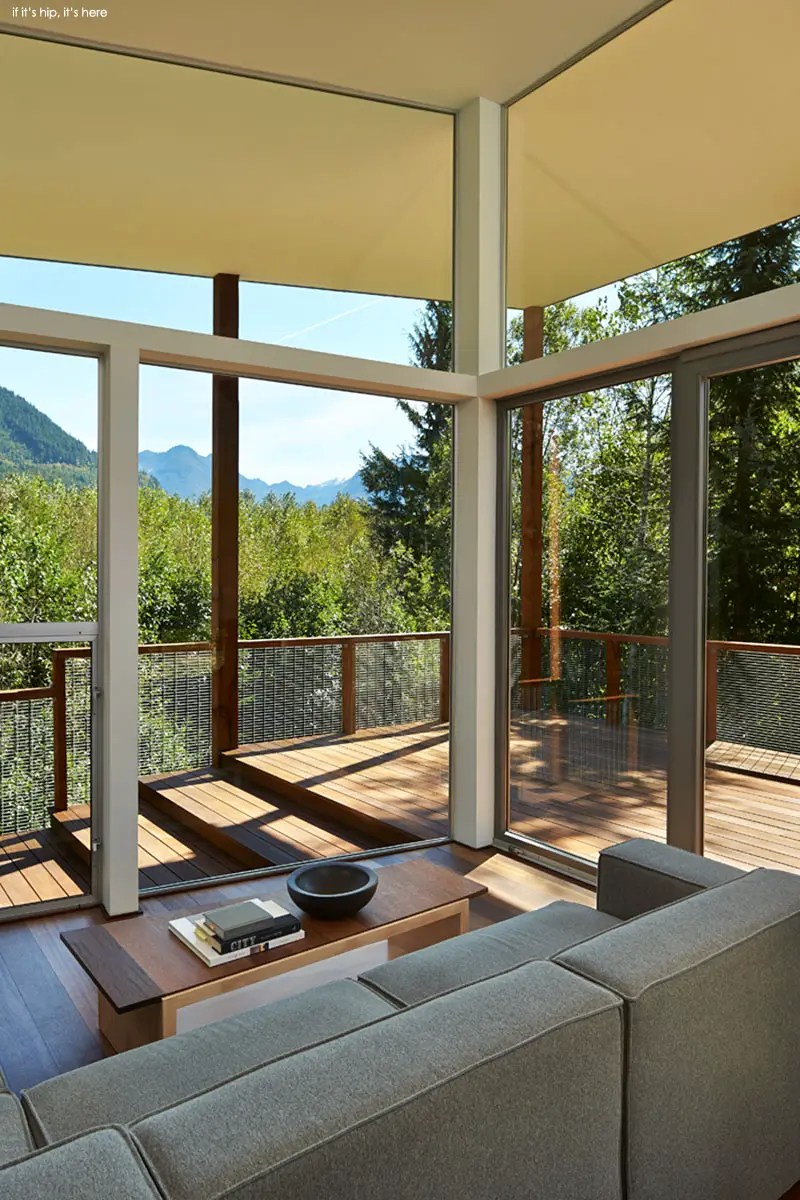 The 1000 SF studio houses a music room, workshop and guest loft. The west wall is clad in a polycarbonate skin, illuminating the interior rooms in a soft glow during the day, and the exterior terrace in a dramatic display in the evening. Building forms are angular and elemental, not unlike the surrounding mountain peaks. 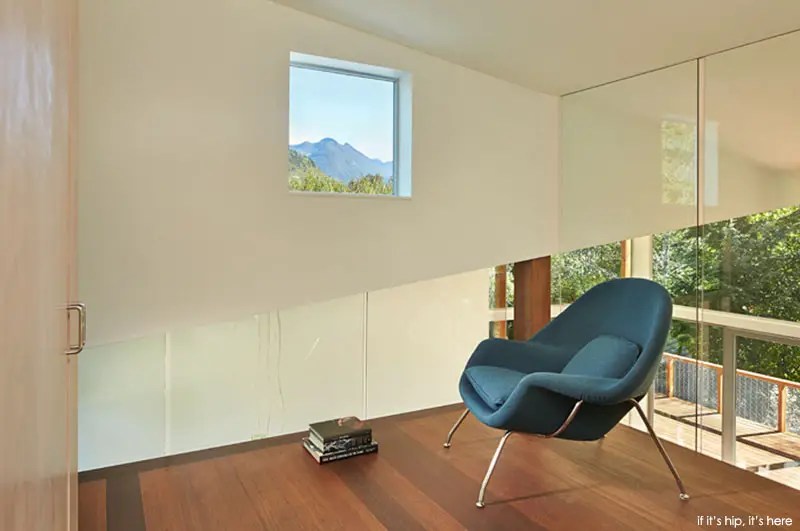 The result is a dramatic building, deceptively simple, deeply rooted in the site and unexpectedly crisp and modern. 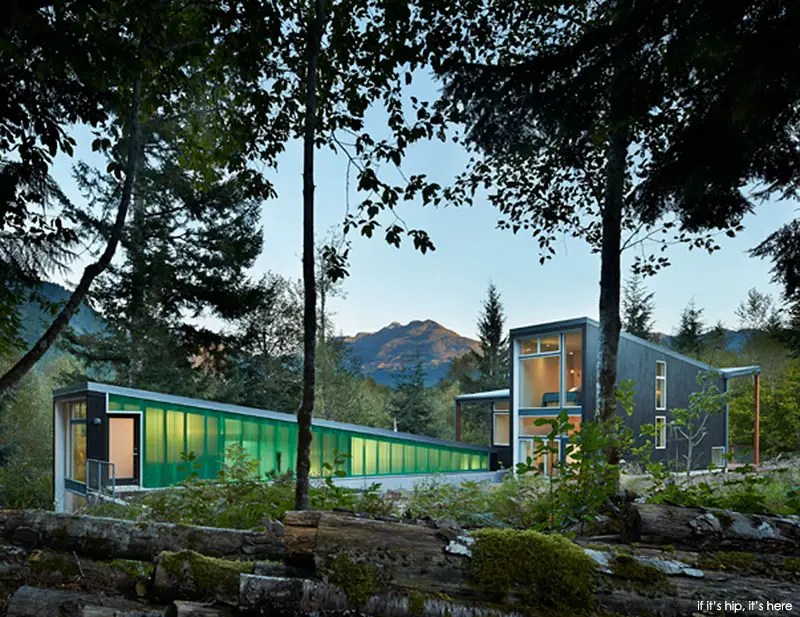 The New Batumi Aquarium From Henning Larsen Is Inspired By Beach Pebbles.