` Baccarat Evian Bottles by Gaultier - If It's Hip, It's Here
Skip to content 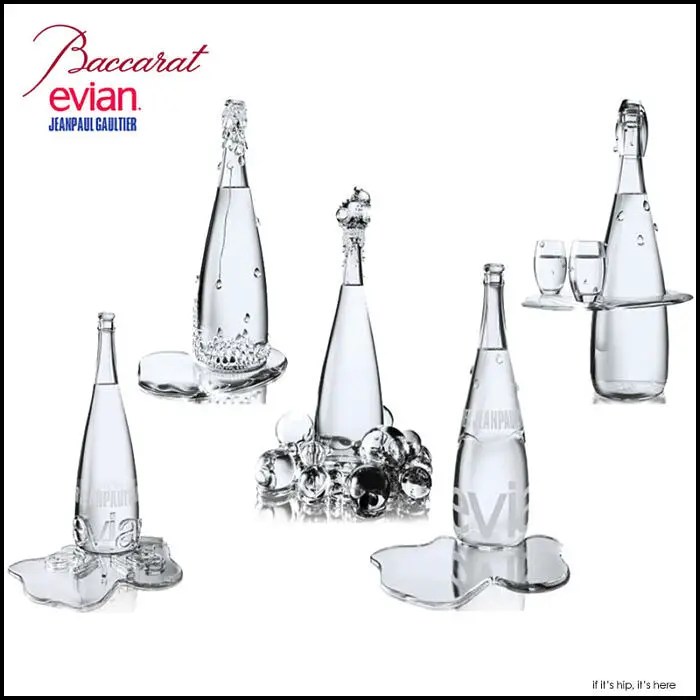 Hermes Creative Director and fashion forward designer, Jean-Paul Gaultier has created both a limited edition ‘Prêt-à-porter’ bottle for Evian water and ‘Haute Couture’ versions (a collaboration with french crystal Baccarat) that yielded 5 exclusive bottles, each named after a major city.

The Evian Pret-a-Porter, or ready-to-wear, Bottle by Jean Paul Gaultier possesses a style that is: “classic, yet modern all at once”. Adorned with a pattern of interlocking snowflakes, the bottle recalls the crisp, icy mountain tops of the French Alps from which Evian Natural Spring Water is derived. Magnified by a unique colour so much known to Gaultier, the majestic blue of the oversized logo and the understated print of the designer’s name offers a subtle reminder of a stylish mariner, a mariner that could so easily be found on the shores of Lake Geneva, which the town of Evian borders. After the pure lines of the ‘Prêt-a-Porter’ 2009 limited edition bottle designed by Jean Paul Gaultier, Evian invites you to discover the Haute Couture collection that the fashion designer has created exclusively for them.

Below are the five stunning bottles.

The London Bottle comes complete with crystal tray and goblets: The magic of crystal comes into its own with each new creation. This exquisite element seems to transform beneath our very eyes: delicate sparkling droplets, a precious undulating pool, light airy bubbles …. Each offers its own subtle and joyful tribute to the purity and exquisiteness of Evian natural spring water.

The Moscow Bottle has crystal ‘drops’ cascading down the side creating a crystal puddle: These 5 unique works of art designed by Jean Paul Gaultier have been crafted at the prestigious House of Baccarat, where the know-how perfected over three centuries of craftsmanship experience has been devoted to these exceptional pieces.

The New York Bottle has crystal bubbles gathering at the top and base: The Melbourne Bottle has drips gathering at the top, cascading down the sides and clustered at the base: The Tokyo Bottle (note the mirrored reflection of the logo in the crystal puddle): All 5 bottles haute collection bottles will tour the world making appearances at high end stores and then will be auctioned off.

They will return home to France in March to be sold during a special charity auction to raise money for the RAMSAR convention whose work to preserve wetlands around the world has been supported by Evian for the past 10 years.

This is not the first time that special limited edition bottles have been created by designers for Evian. In 2008, Christian Lacroix’s bottles for Evian last year also consisted of a pret-a-porter version: … and a haute couture version (below), that when auctioned off, remains the priciest bottle of water ever sold, $23,000.00 USD. Friday, 06 February 2009 Atlanta — Fashion designers know that the key to a good collection combines the reinvention of ideas with underlying signature qualities, and Evian Natural Spring Water is keeping to these same ideals with the release of the newest addition to its designer collection. Remaining true to tradition, Evian has partnered with internationally acclaimed French designer Jean Paul Gaultier to produce five unique and exclusive creations for 2009, the Evian Haute Couture Bottles by Jean Paul Gaultier.

Following the pure yet bold design of the Evian Pret-a-Porter, or ready-to-wear, Bottle by Jean Paul Gaultier, the Haute Couture Bottles celebrate the essential through an astonishing and sublime collection by the famous French designer. Expertly crafted at the prestigious House of Baccarat, only five of the Haute Couture Bottles will be released worldwide, with these few exclusive carafes travelling to capital cities around the globe to be exhibited at select locations.

To this end, the collection of cylindrical masterpieces will be returned to France in March, where they will be auctioned off to raise money for the RAMSAR convention, whose work to preserve wetlands around the world has been supported by Evian for the past 10 years. “Jean Paul Gaultier has consistently pushed the boundaries of fashion. He is revolutionary in his craft, yet always maintains an air of elegance and class in his designs,” said Lauren Kinelski, Public Relations Manager for Evian North America. “In this regard, Gaultier was the perfect fit for Evian.

Gaultier has transcended the runways of France to become a household name worldwide, much in the same way that Evian has expanded its presence throughout the globe, ascending from a natural spring water in the French Alps enjoyed by the locals to being one of most favored drinking waters on earth.” Both the Evian Pret-a-Porter Bottle and the Evian Haute Couture Bottle by Jean Paul Gaultier made their global debut to the world in Paris, France during one of the world’s most glamorous events, Paris Fashion Week.

Expertly crafted at the esteemed House of Baccarat, only five of the Haute Couture Bottles will be released worldwide. Just in time for New York’s Fashion Week this February, the Haute Couture “Bubble” Bottle will begin its tour through the most elite of Manhattan’s restaurants, hotels, and retailers. The luxury retailer Bergdorf Goodman will be the first U.S. location to showcase one of these objet d’art for public viewing. Following the debut at Bergdorf Goodman, the bottle will travel to selected upscale hotels and restaurants in Manhattan throughout the month of February, including the Soho Grand Hotel, Buddha Bar and Bagatelle Restaurants. The Gaultier-designed bottles mark the second annual release of high-fashion creations from Evian. In late 2007, the world’s most luxurious natural spring water similarly launched the Limited Edition Evian Bottle by Christian Lacroix, which quickly became a favored item with the trendsetting crowd. Christian Lacroix also created a series of Haute Couture Bottles to auction off for charity, with the highest bidder going down in the Guinness Books for the most expensive bottle of water ever sold. Copyright (C) 2009 PR Newswire. All Rights Reserved