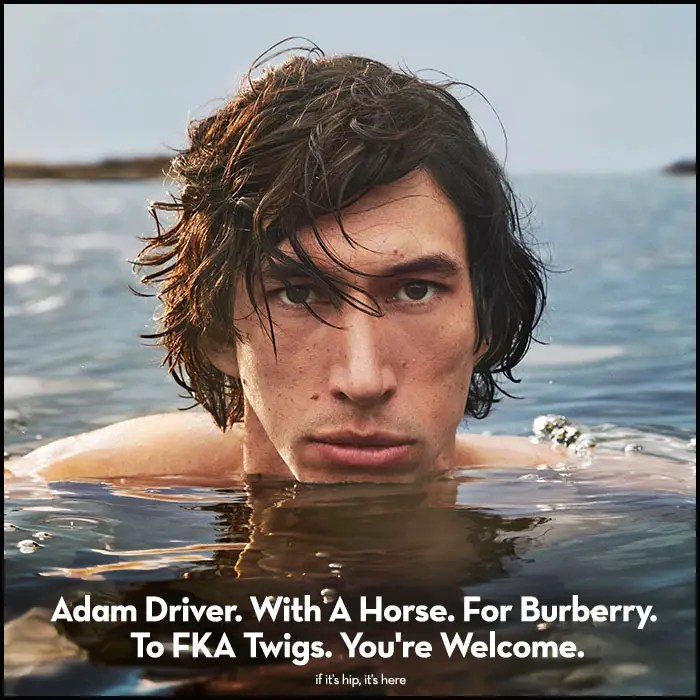 I’ve had Adam Driver on the brain. How could I not? For the past few years, he’s been staring back at me from my TV, magazine covers, billboards and bus benches, in my mobile phone news feeds and even in the little movie icons on my streaming menus. At present, he’s everywhere, enticing us in movie trailers for House of Gucci (I can not wait!) and now this. We get to watch him, topless, frolic with a horse in the ocean only to emerge as a Centaur? That’s right. It’s Adam Driver. With A Horse. For Burberry. To FKA Twigs. You’re Welcome.

I write less and less about tv commercials these days. Not because there aren’t expertly conceived of or impressively produced ones out here, but because it used to be that most people weren’t exposed to them. They either aired in another market or country and weren’t as readily available to see, so I would bring them to you. That’s no longer the case, obvs. And although you can come across this ad while watching television, or posted on many a social media platform, I couldn’t take the chance that it might pass you by.

Adam Driver. That awkward, gangly kid from Indiana unlikely to become an International Sex Symbol and Movie Star is now exactly that. We first saw him – and lots of him – back in 2012 on GIRLS as Lena Dunham’s lead character’s boyfriend. Remember? Here we are, not quite a decade later and he’s world-renowned, a top Hollywood Box Office draw, Magazine Cover boy and the subject of many a crush.

Since his debut on GIRLS, he was cast as a Kylo Ren in the best known Sci-Fi movie franchise turning him from a Geek into a Bad Ass overnight. He’s since grown into his awkwardness and a set of killer abs. Burberry thought so too and cast him as the embodiment of “masculine spirit exploring the house codes of duality and the power of the animal kingdom.” Their words, not mine. In the launch ad for Burberry Hero, their new fragrance for men, actor Adam Driver races a horse to the ocean, frolics within and emerges, dreamlike, as a Centaur. Half man, half horse – each in the correct half- and all to the accompanying angelic strains of FKA Twigs “Two Weeks.” By the way, the singer also stars in Burberry’s new campaign for their Olympia handbag along with Kendall Jenner and Shygirl.

The text that accompanied the video on YouTube reads:
“Burberry introduces Hero, Riccardo Tisci’s first scent for Burberry starring Adam Driver.
A new masculine spirit exploring the house codes of duality and the power of the animal kingdom. A man in search of transformation and metamorphosis as a new modern heroism.” 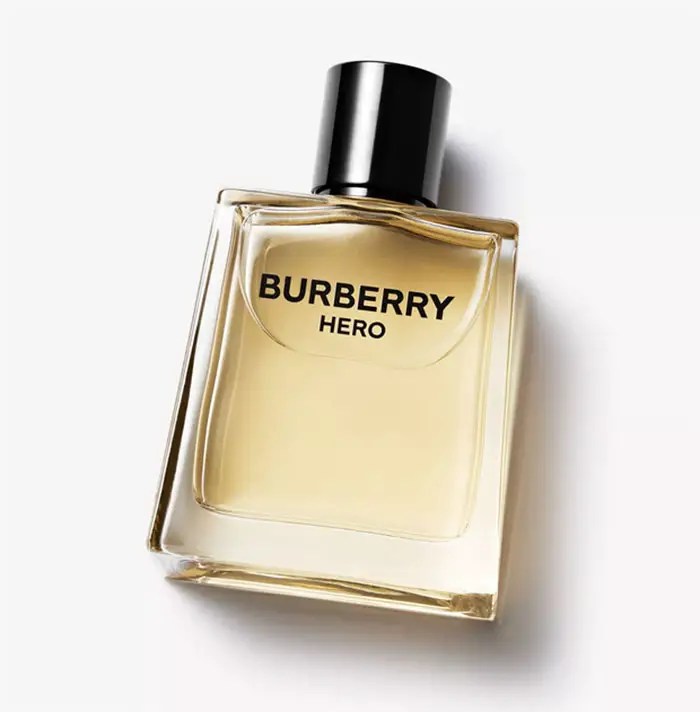 And you know what? It’s working. The men’s fragrance is already SOLD OUT in the US in all three sizes!

all images courtesy of Burberry.com

Sneaker Lovers Can Get Their Kicks With These Cool Items

Cheetos Lets You TP Any House For Halloween – Digitally.

Silence of The Lambs and Princess Bride Wines for Drafthouse Cinemas