` Hanksy Street Art - If It's Hip, It's Here
Skip to content 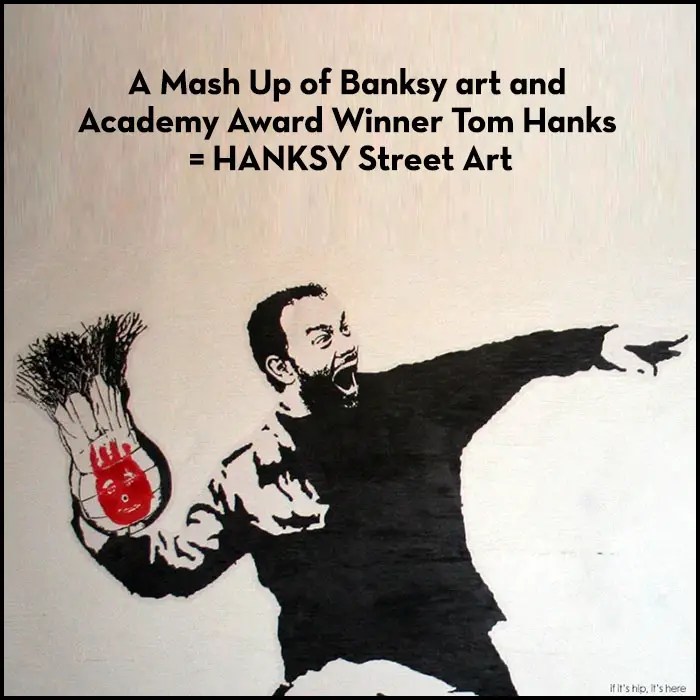 Street Art and Graffiti often tends to be tongue-in cheek to begin with. Add another layer of puns and fun and you’ve got Hanksy’s work – A mash up of the street art by Banksy and the movies of award winning actor Tom Hanks which manages to mildly mock both. The street art references Hanks’ roles in films such as Big, Catch Me If You Can, Forrest Gump, Castaway, A League of Their Own, Apollo 13 and The Money Pit to name a few.

The familiar Bansky stencils are modified to include Hanks’ head and lines relating to the movies, infused with puns and wordplays.

The images and work of Hanksy have appeared on the streets of New York and Chicago and New York’s Krause Gallery featured much of his work on paper in a recent exhibit.

The following images are from that show. And here are some shots of Hanksy’s work in situ: The text below is courtesy of the Krause Gallery:
A street artist is doing some amazing new street art in and around NYC.
He goes by the name of HANKSY.
Add the overwhelming popularity of Tom Hanks to the cool factor of the most famous street artist of all time, Banksy, and you get HANKSY. HANKSY has become a social media phenomenon with his imaginative street art spoofs by taking images of Banksy’s work and adding in references from Tom Hanks’ films.

“People have speculated whether HANKSY is just a play on words or perhaps something a bit more, does he hate Banksy? Is it homage to one of the greatest street artists and actors of our time? Maybe it’s an attempt to subvert the subversive or perhaps it plays on the uniquely American pleasure the public finds in trivial imagery. Maybe in the end its much more straightforward? Add a certain ‘sometimes’ vowel at the end of a specific actor’s surname and it sounds an awful lot like the world’s most well-known street artist. (via Krause Gallery)

You can see also several of the Hansky graffiti work in situ here at flickr.

Fish On The Edge. The Bubble Tank by Richard Bell for Psalt Design.

Sneak Peek of The Citiscape Show VIII at George Billis