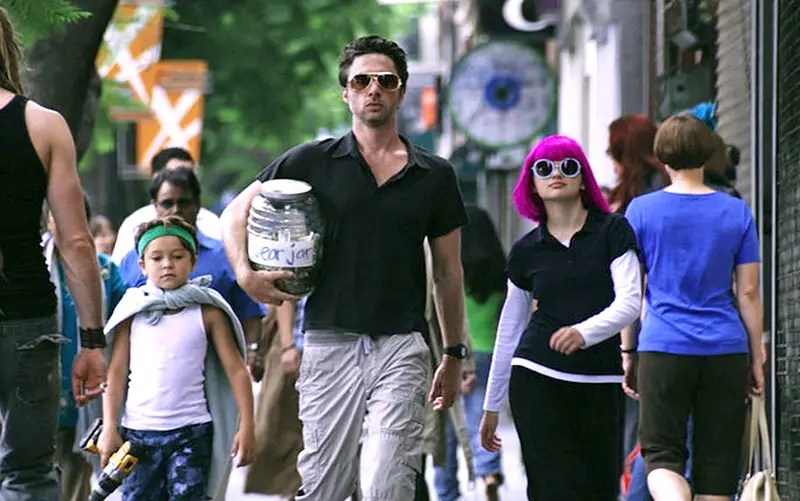 A few months back, I posted about director/actor Zach Braff raising funds in an unorthodox -and highly criticized- way for his new indie film, Wish I Was Here. The celeb raised a total of $3 million ($1.2 million in only two days) via kickstarter which annoyed many because they felt he was a wealthy celebrity who could have funded the film himself. The movie is now completed and opened in theaters yesterday. It’s about a 35-year-old father who’s never quite grown up learns about life when he’s forced to homeschool his kids, since their grandpa can no longer afford their private-school tuition and their public school is a mess. Starring Zach Braff (Aidan Bloom), Kate Hudson (Sarah Bloom), Mandy Patinkin (Gabe Bloom), Josh Gad (Noah Bloom), Joey King (Grace Bloom), Pierce Gagnon (Tucker Bloom), Ashley Greene and Jim Parsons, the movie is receiving high marks from fans and not such great reviews from movie critics. Zach talks about his film in the video below:

The Power Of Place
The movie has several social media components, one of which is The Power of Place.

Share your favorite photos that exemplify the Power of Place by hashtagging #thePowerofPlace on Facebook, Twitter, and Photobucket. From your childhood home to the street of your first love, we want to see it all. Share with us the places and things that have helped define who you are. There’s nothing to be ashamed of. Dust off that old photo album and start scanning. A quirky and heartwarming photo could win you a thousand dollars! *Subject to verification of eligibility and compliance with Official Rules

The Soundtrack
Despite what some may think about the movie, it has a great soundtrack featuring new music from The Shins, Bon Iver, and Cat Power + Coldplay.
Music from the Motion Picture WISH I WAS HERE:
1. The Shins – So Now What
2. Gary Jules – Broke Window
3. Radical Face – The Mute
4. Hozier – Cherry Wine (Live)
5. Bon Iver – Holocene
6. Badly Drawn Boy – The Shining
7. Jump, Little Children – Mexico
8. Cat Power & Coldplay – Wish I Was Here
9. Allie Moss – Wait It Out
10. Paul Simon – The Obvious Child
11. Japanese Wallpaper – Breathe In (feat. Wafia)
12. Bon Iver – Heavenly Father
13. Aaron Embry – Raven’s Song
14. The Weepies – Mend
15. The Head and the Heart – No One To Let You Down

It was just released on CD, Digital Formats and even vinyl and can be purchased here

She Really Did Turn The World On With A Smile. Our Tribute To Mary Tyler Moore.