you are here: if it's hip, it's here » fashion » couture fashion » Wocka Wocka Wocka Down The Runway: Giles Deacon Does Pac Man Couture.

Critics say that hot fashion designer Giles Deacon’s latest collection for Spring/Summer 2009 is fairly conservative for him and not as wacky or irreverent as his past fashion excursions. With more traditional silhouettes (there were exceptions), fabulous graphic colored camouflage patterns and trim, as well as streamlined solid colored double knit jersey dresses, he may actually be turning somewhat… dare I say it… wearable.

However, the styling and production of his Spring Summer 2009 runway show, the floor of which was painted with the familiar graphic imagery of the 80’s video game pac man, was anything but conservative. In an homage to Midway’s Pac Man video game, every few models to strut down the runway wore large metal headgear which emulated the pac man characters (with a little creative liberty, of course). 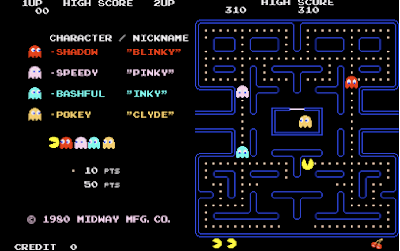 above: The 1980 original pac man video game characters and interface 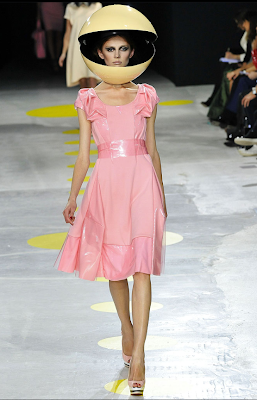 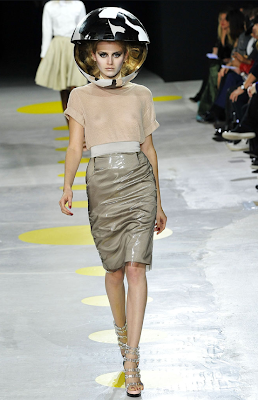 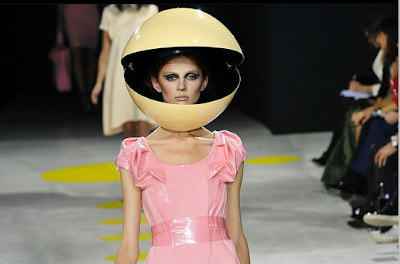 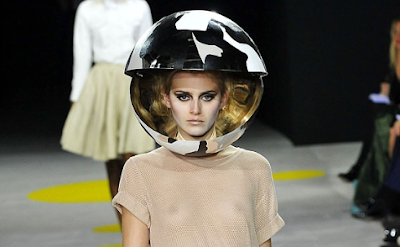 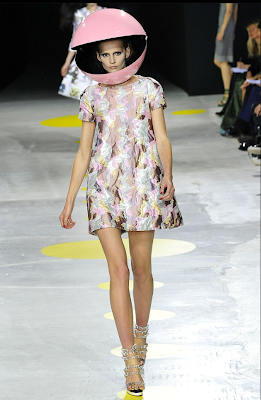 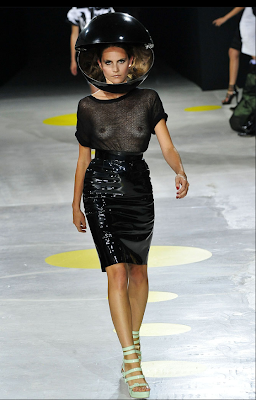 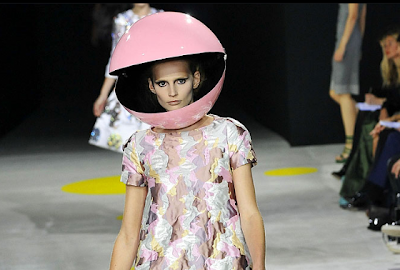 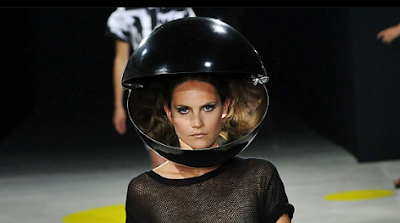 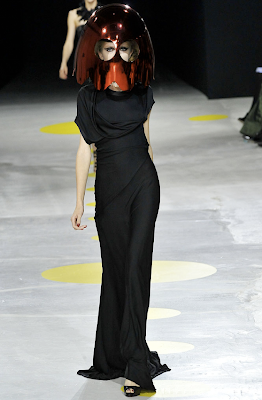 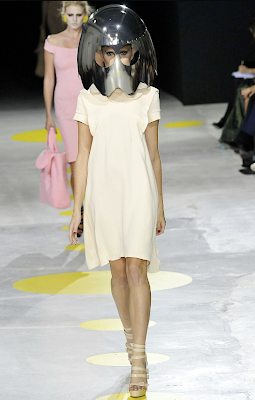 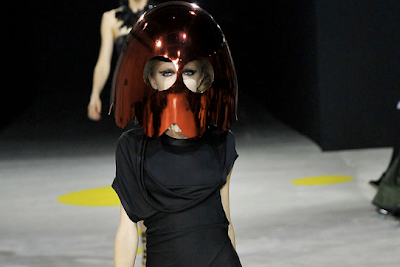 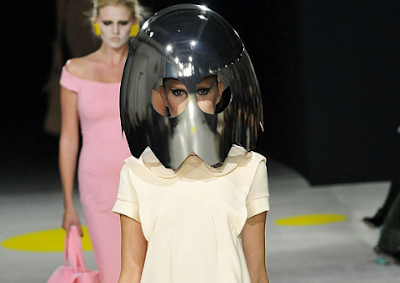 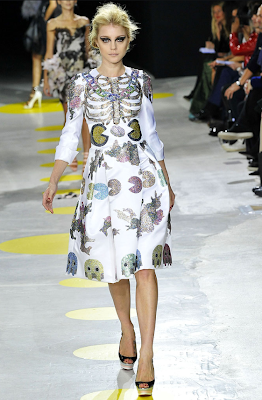 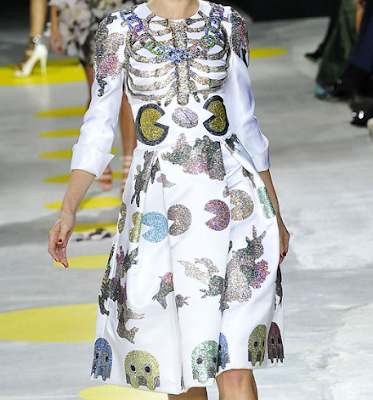 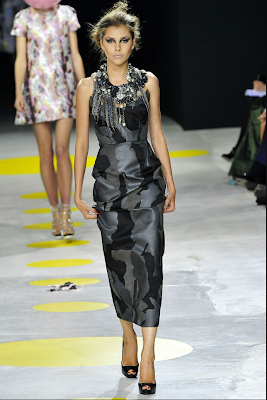 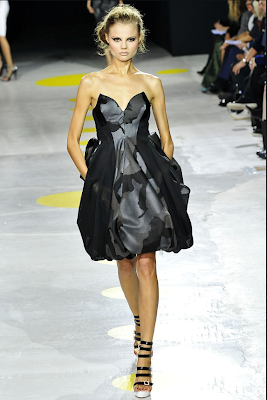 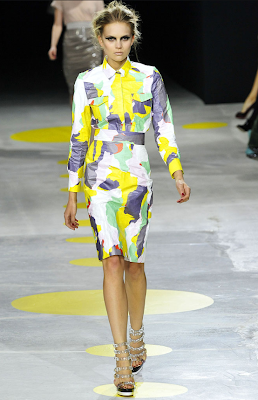 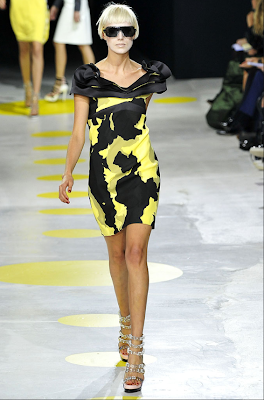 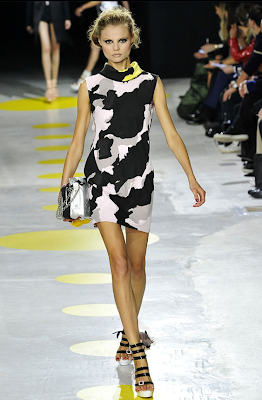 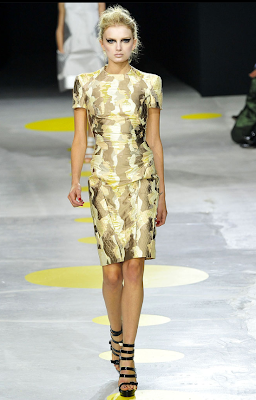 Some facts about the Designer:
• Giles Deacon has designed for Jean Charles De Castelbajac, Louis Vuitton and Ralph Lauren
• His design studio is the Rochelle School in East London where Katie Hillier, Luella Bartley, Hazel Robinson and his other fashion friends work
• In 2007 he was named British Designer of the Year
• He used to date Beth Orton
• He’s a brilliant illustrator – having been published in Interview, The Face, Pop, i-D. 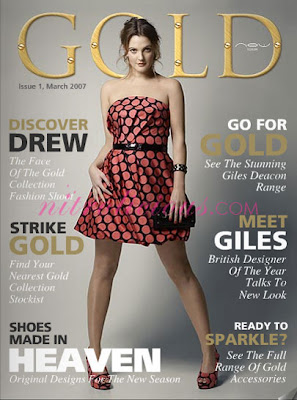 He also designed a collection (above), Gold, for New Look with Drew Barrymore in the ad campaigns (the pair decided to work together after a chance meeting in an elevator), and he also designed womenswear for DAKS for two seasons ending in autumn/winter 2008-9. 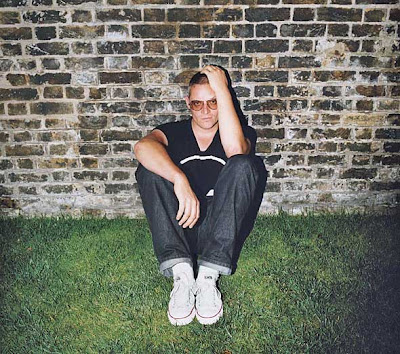