` Vandals Punch Hole in Priceless Monet - If It's Hip, It's Here
Skip to content 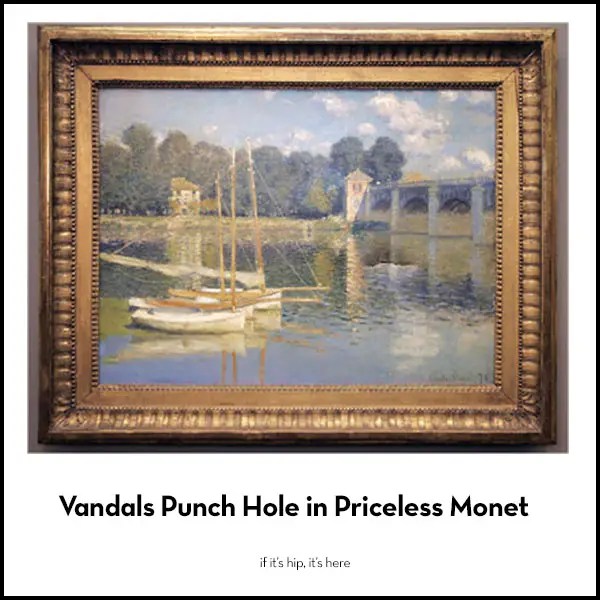 A surveillance camera caught a group entering the museum, located on the Left Bank of the French capital along the Seine River and housing a major collection of Impressionist artists like Monet. An alarm sounded and the group left, but not before damaging the painting, an aide to Culture Minister Christine Albanel said by telephone.

No arrests were immediately made.

Albanel told France-Info radio that the painting could be restored, but she deplored what she said was an attack on “our memory, our heritage.”

“This splendid Monet painting (was) punched right in the middle,” the minister said with emotion.

According to the aide, a 10-centimetre tear was made in the Monet, perhaps with a fist. The official, not authorized to speak publicly of the matter, asked not to be named.

It was not immediately clear how many people were in the group that broke into the museum.

“Le Pont d’Argenteuil” shows a view of the Seine at a rural bend, featuring a bridge and boats.

Albanel told France-Info that she would doubtless seek improved security in museums and stronger sanctions against those who desecrate art. “This is not tolerable,” she said.

The break-in occurred as Paris held its annual all-night festival, which brings thousands of people into the streets for music, exhibits and fun.

A nearly 4-inch tear is seen in renowned work by Impressionist painter Claude Monet, “Le Pont d’Argenteuil,” at the Orsay Museum in Paris.

Dissections by Angela Christine Smith Combine Photography, Ink and A Sense of Self.