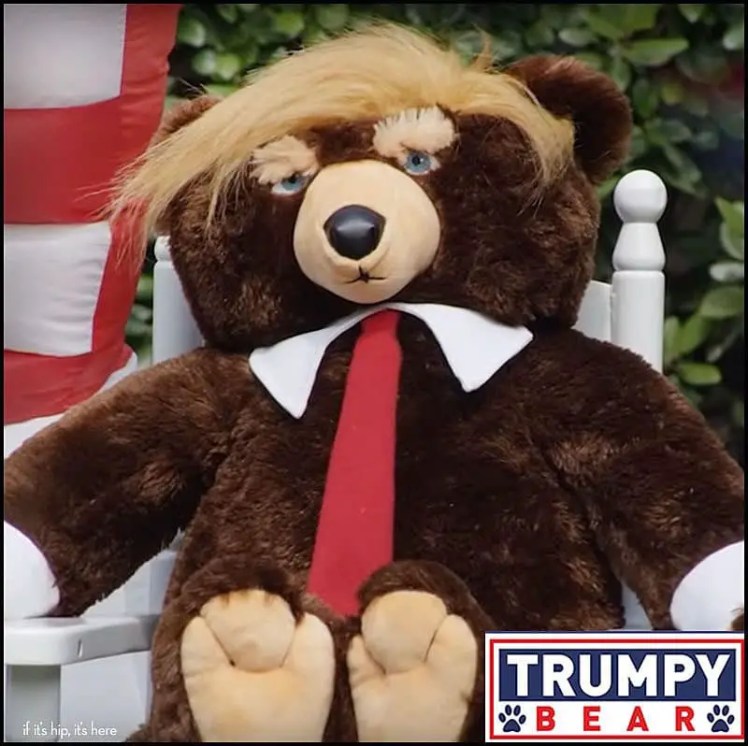 While the Trumpy Bear toy and commercial smack of an SNL parody sketch, Trumpy Bear is an actual product available for purchase. Snopes-validated, the plush toy bear with a combover and orange brows was designed as a cuddly homage to the United States’ least cuddly leader. He even has a 28-by-30-inch American flag blanket stored in a zipped pouch inside Trumpy Bear himself. Apparently Trumpy Bear was actually launched on Flag Day, June 14th, 2017 and was promoted with this hilarious, official 2 minute commercial in October 2017 (How did I miss this?):

The 22″ plush bear with a U.S. Flag stuck up his butt (does that make it an Old Glory hole?) and accessed via a zippered compartment in his neck is being sold for “Two easy payments of $19.95” and comes with a certificate of authenticity. Exceptional Products, the Texas company that markets Trumpy Bear on television, also uses infomercials and television advertising to promote products like Hairdini, Save a Blade and Plaque Attack. Made in a limited number, Trumpy Bear is a plush 22″ bear with an attached 28″ by 30″ flag themed blanket. Trumpy has a zippered neck where the blanket is stored. Interested in other Official and non-official Trump inspired products? We’ve got a bunch for you here