` The Virgin Mary In Everything From Tech To Fashion. - If It's Hip, It's Here
Skip to content 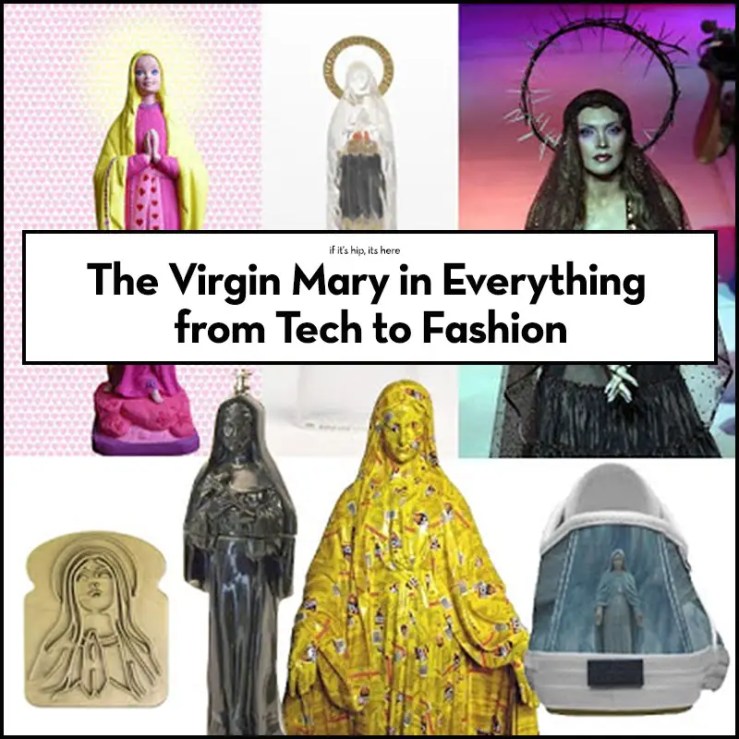 The Virgin Mary as you’ve never seen her before.
In honor of Christmas, here’s a round up of products inspired by the Mother of all Mothers…. Mary. Some modern and yes, blasphemous, Virgin Mary inspired designs and products. This post is not meant to offend, but to inform.

Of course, the Virgin Mary has been around in art for centuries and yes, there are many serious products that feature the Virgin Mary (aka Madonna, Mother Mary or Maria) as everything from clocks to night lights. But those you can find at your nearby church or online religious supply stores like catholic shopper.

But for this post, I’m featuring contemporary versions of the saintly icon in everything from usb storage drives to urinals. Now, there are thousands of contemporary artists who’ve used the religious icon in their pieces both satirically and seriously but I can’t show you all of them, so I’ve chosen a few of the more unusual ones to share with you. See all of his Madonna statuettes here.

Scott Campbell’s cut up money caused controversy by both defacing US currency as well as using religious icons: See much more of his work here. Part of his “Drop Dead Gorgeous” show, you can see more here. Throw Pillow:
As part of their Church series, DFCasa has created this Virgin Mary Throw pillow: Virgin Mary blankets of all kinds: shop for them here

Virgin Mary fashion:
If you never saw Jean Paul Gaultier’s stunning 2007 Haute Couture collection inspired by the Virgin Mary, you’ve missed out on some of the most beautiful gowns and headpieces ever: Bearing some seriously sacrilegious cleavage, his fashion show in Chile earlier this year caused much controversy. see the collection and read about the controversy here.

Virgin Mary Keds:
yes, there are tons of artists who sell their Virgin Mary t-shirts, hats, stickers and more on sites like Zazzle and Cafe Press. But these Keds really caught my eye: Virgin Mary/penis soap:
One of the many fun and unusual products by Donkey brand is this soap which appears as Mary on one side and the male member on the other: Other unorthodox sightings include this Playboy Cover from December 2008: So, as you can clearly see, from haute couture to erotica, housewares to tech, the Virgin Mother continues to make appearances (pun intended).