` The Incredibly Talented Eiko Ishioka - If It's Hip, It's Here
Skip to content Today’s Google Doodle honors the late Eiko Ishioka. Based on the images, one could deduce that she was a costume designer. But Ishioka was soooooo much more than that. An artist, advertising art director, graphic artist, costume designer, logo designer and all around creative talent, Ishioka passed away in 2012 from pancreatic cancer. The woman was talented in just about every creative endeavor imaginable.

The Google Doodle slideshow showcases some of Ishioka’s famous designs from director Tarsem Singh’s 2006 movie The Fall, on what would have been her 79th birthday.

While her costume designs for such films as The Cell, Brahm Stoker’s Dracula, The Fall and Mirror Mirror, to name a few, are breathtaking, she was also a superb print and tv and video art director, graphic designer and more.

Earning her an Oscar, a Grammy, and two Tony nominations, Eiko Ishioka’s work had a way of taking center stage no matter the medium. From print ads and album covers to costumes for film, theater, and the Olympics, the iconic Japanese designer did it all during her decades-long career — often unlike anyone before.

Ishioka expressed a flair for the dramatic combined with an unwitting sense of humor when she collaborated with famed Japanese designer Issey Miyake on his theatrical fashion shows “Fly with Issey Miyake” and “Issey Miyake and Twelve Black Girls.” Together, they turned one of his fashion shows into a cross between a Broadway musical and a one-act drama. They charged admission and played to packed houses for six performances. 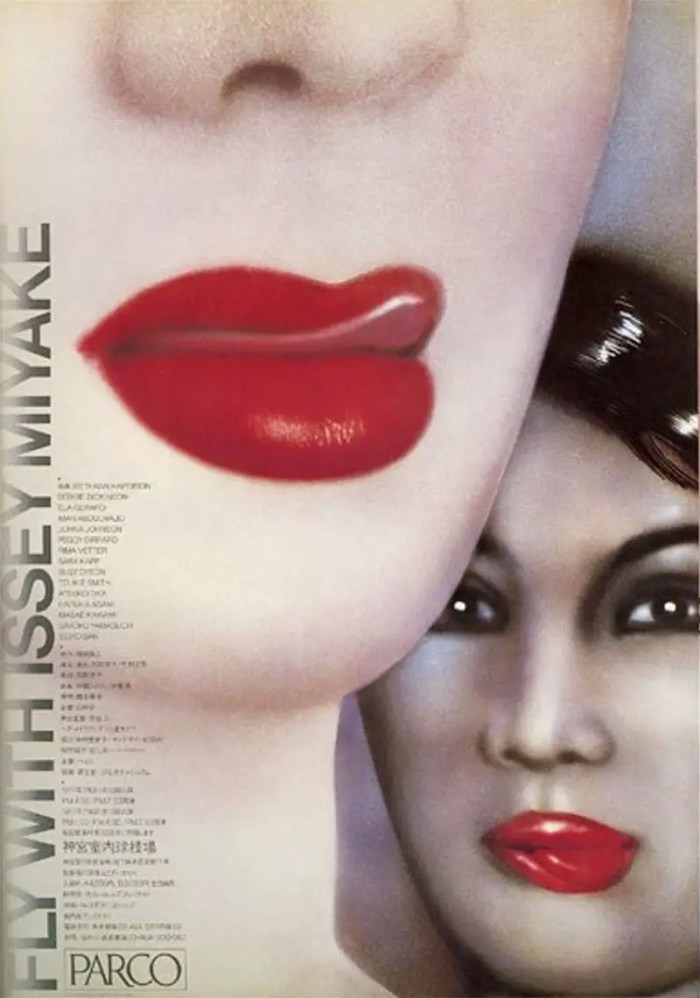 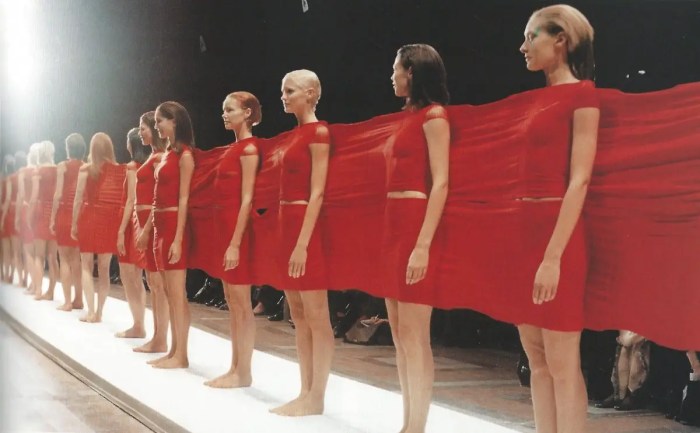 Eiko began her career with the advertising division of the cosmetics company Shiseido in 1961 and was the first woman to win Japan’s most prestigious advertising award four years later.

According to wikipedia Eiko was discovered by Tsuji Masuda who created Parco Ikebukuro from the ailing Marubutsu Department Store. When Parco did well and expanded to a Shibuya location in 1973, Eiko designed Parco Shibuya’s first 15-second commercial for the grand opening with “a tall, thin black woman, dressed in a black bikini, dancing with a very small man in a Santa Claus outfit”.

She became deeply involved in Parco’s image. Her last Parco campaign involved Faye Dunaway as “face of Parco” wearing black, on a black chair against a black wall, and peeling and eating an egg in one minute as “a film for Parco.”

She became its chief art director in 1971 and her work there is noted for several campaigns featuring Faye Dunaway and for its open and surreal eroticism.

In 1983 she ended her association with Parco and opened her own design firm.

Born and raised in Tokyo, Ishioka pursued a career in graphic design at a time when there were few women in the industry. Despite the challenges she faced, Ishioka pushed through boundaries both socially and artistically. Her early print ads evoked many of the same themes that would later define her costume design: bold, surreal, and consistently unexpected.

“The world is my studio and everything on earth is my motif,” says Ishioka of her approach. “In order to help communicate my message, I have looked for talented people in various fields. I have worked with these people to broadcast our messages throughout the media. Television, stage, posters, newspapers, and books have been my canvas, and my collaborators have been most precious paint.”

It was through these collaborative efforts that Ishioka successfully brought advertising and design to her own “high art.”

For the Miles Davis album cover design, Irving Penn took the photos that were art directed by Eiko: She even designed for the Olympics. At the 2002 Salt Lake City Olympics, she designed uniforms and outerwear for the Swiss, Canadian, Spanish, and Japanese teams, in addition to creating the Concentration Coat — a womblike cocoon meant to help athletes meditate and free themselves of distractions before competition. However, the Michelin man-style coat used by the Swiss team at Salt Lake City in 2002 was a resounding failure.

At the 2008 Beijing Olympics, she took on a much larger role: art-directing the optically and physically staggering opening ceremony (the only opening ceremony about which I have blogged). The Guardian called the event “spellbinding,” while Yahoo proclaimed that Beijing “set the bar for Olympic opening ceremony standards.”

She worked closely with director Tarsem Singh on several films throughout her career, including 2012’s Mirror Mirror. “Eiko by Eiko,” a collection of her groundbreaking early work in graphic design and art direction, was published in 1983.

Eiko Onstage chronicles nine of her most dynamic stage and screen productions from the past fifteen years, including: Bram Stoker’s Dracula, directed by Francis Ford Coppola, M. Butterfly, starring Anthony Hopkins, Richard Wagner’s Ring of the Nibelung, and The Cell, starring Jennifer Lopez. Better Flock To David Tomb’s Next Art Show: Birds Of The Sierra Madre

Banksy Posts New Painting In Support Of Protests Against Racism