Located in Madrid, the Hemeroscopium House, designed by Anton Garcia-Abril and Ensamble Studio, took a full year to engineer but only seven days to actually build (including that amazing cantilevered swimming pool).

Albeit, it’s not being embraced by the eco friendly community given its large carbon footprint (apparently 1 ton of concrete = 1 ton of carbon dioxide) and the fact that reader comments suggest it’s ‘blatantly wasteful’. Even Treehugger author Lloyd Alter smartly suggested that the beams should have been reappropriated ‘from a dismantled highway’. Regardless of its potentially negative effect on the environment, it’s certainly has an aesthetically positive effect on me (although I do wonder who is gonna clean those two swimming pools and all those windows). Hemeroscopium house materializes the peak of its equilibrium with what the Ensamble Studio ironically calls the “G point”, a twenty ton granite stone, expression of the force of gravity and a physical counterweight to the whole structure: 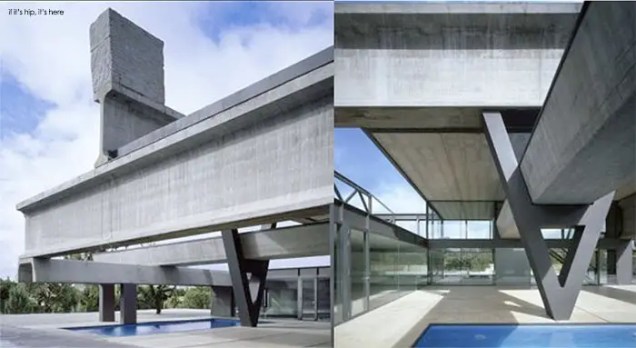 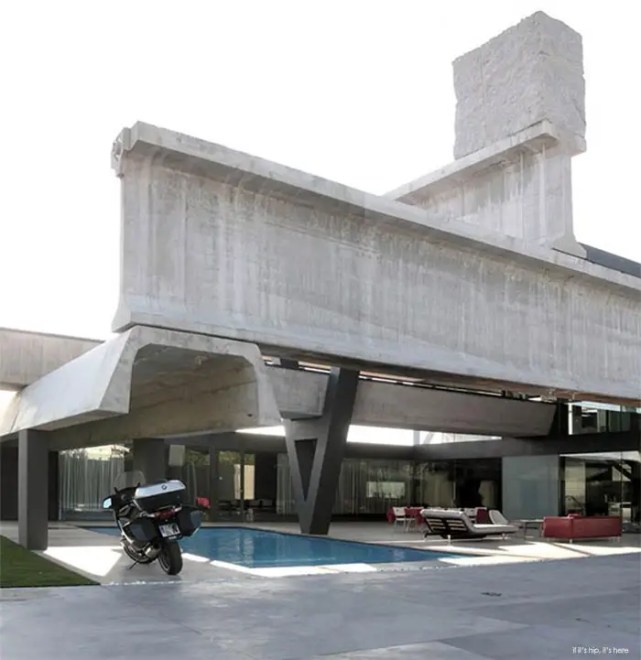 The order in which these structures are piled up generates a helix that sets out from a stable support, the mother beam, and develops upwards in a sequence of elements that become lighter as the structure grows, closing on a point that culminates the system of equilibrium. Seven elements in total. The design of their joints respond to their constructive nature, to their forces; and their stresses express the structural condition they have. By the way this structure is set, the house becomes aerial, light, transparent, and the space kept inside flows with life. The apparent simplicity of the structure´s joints requires in fact the development of complex calculations, due to the reinforcement, and the pre-stress and post-tension of the steel rods that sew the web of the beams. The Architect with his team: To see the entire building process including sketches and the architectural renderings, go to Arch Daily here.

special thanks to Ensamble Studios, Archinet and Archdaily for the images and info.

Artists Take The Plunge: The Swimming Pool As Subject.

Check Out The Tetra Shed. A Modern Modular Office Pod Available Next Month.