` The Photographer Known As Rankin - If It's Hip, It's Here
Skip to content 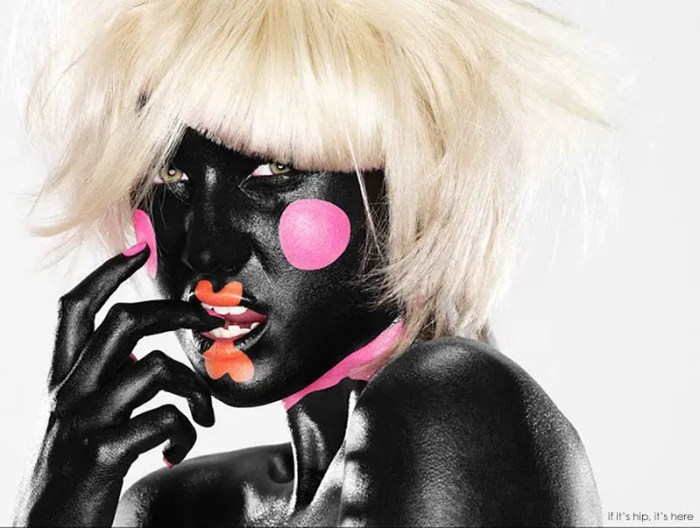 John Rankin Waddell, who is better known by the sole name of Rankin, is a very busy and very talented man. Having photographed everyone from the Queen of England to the Queen of Pop, Rankin is often seen as a celebrity photographer, but his talents and repertoire go way beyond portraiture.

The Photographer Known As Rankin

Publishing, direction, film production, commercial photography, charity work, digital art and encouraging new emerging talent are just some of his many accomplishments. Despite all those impressive ventures, it his his enormous range of photographic work to which I find myself drawn. A chameleon when it comes to style, technique and mood (okay, so he does seem to have a thing for loose and blowing hair), this skilled creative can shoot fashion, beauty, hair, editorial and photo-journalistic work, and of course, portraits. He imbues his work with ambiance ranging from studio sterile to alleyway grungy and moods ranging from romantic to macabre. There is hardly anything he can’t photograph beautifully. Throughout this post are 27 various photographs I culled from different projects of his that I find compelling and, hopefully, convey a small part of his astounding range. Rankin made his name in publishing, founding the seminal monthly magazine Dazed & Confused with Jefferson Hack in 1992 and in late 2000, Rankin published the heteroclite quarterly Rank, an experimental anti-fashion magazine celebrating the unconventional.

In 2001, Jefferson and Rankin went on to launch AnOther Magazine and then in 2005 AnOther Man was introduced.

His first major worldwide and award-winning campaign – Dove’s ‘Real Women’ – epitomized his approach: to reveal the honesty of the connection and collaborative process between photographer and subject.

In 2010 Rankin celebrated Dazed & Confused’s 20th anniversary, shooting 20 front covers of Dazed favorites and 20 inside covers of the next generation of talent, all for the December 2011 issue.

With Oxfam, he visited the Democratic Republic of the Congo and Kenya, and in 2011 hosted an Oxglam exhibition, featuring work from some of the world’s most talented emerging young photographers, and raising money for the charity.

In 2011, Rankin Film Productions was born. Rankin developed a taste for film directing music videos, commercials, and short films with co-director Chris Cottam between 2002 and 2009, including their debut feature film, the award-winning The Lives of Saints. He continues to direct independently on both commercial and personal projects.

Taking on the new role of Executive Producer, Rankin recently founded Collabor8te, in association with The Bureau and Dazed TV.

In November 2011, Rankin simultaneously launched The Hunger Magazine and the Hungertv.com website with a unique focus on video content – fashion films, behind the scenes footage and exclusive performances, collaborations, and interviews. The Hunger is both a personal creative feat and a launch pad for other talent to step into the breach.

Rankin has published over 30 books, is regularly exhibited in galleries around the world, and has recently opened galleries in London and Los Angeles. Always interested in the democratization of the image, Rankin undertook the biggest project of his career – Rankin Live, the culmination of the accessibility and speed of modern photography.

Dennis Hopper Behind The Camera And The Canvas.