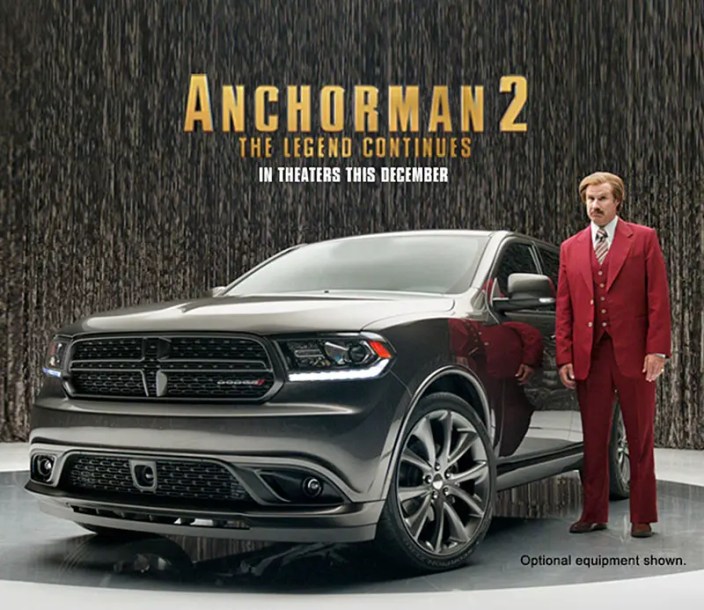 With Anchorman 2: The Legend Returns opening in theaters December 20th, just about everyone will recognize the mustachioed suit-clad character Ron Burgundy, whether they’ve ever seen Will Ferrell in the role or not. That’s because the promotional tie-ins with Paramount Pictures upcoming film are, as Ron would say, “Kind of a Big Deal.”

From shilling for Dodge as their Durango spokesman to his own branded whiskey, the character has inspired everything from a Ben and Jerry Scotch-flavored ice cream to Jockey briefs. Action Figures, LEGO Mini figs, Replica Coats, Panther Sex Cologne and more. Here’s a look at the best of the bunch. 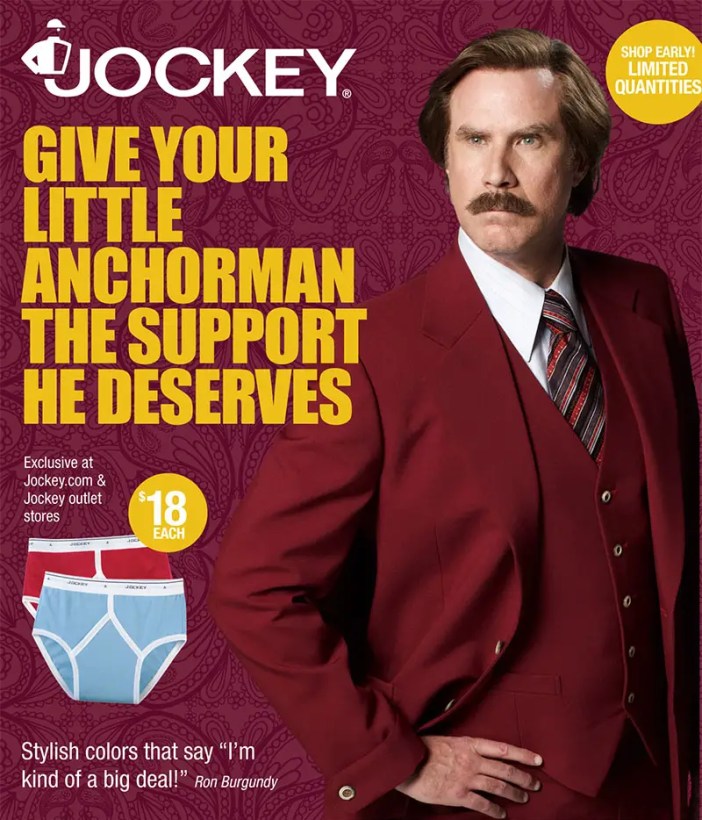 Jockey has launched 100% cotton briefs briefs as The Stuff legends Are Made Of with a unique Y-front® fly that provides ample support for your little anchorman in stylish colors that say “I’m kind of a big deal!” – Ron Burgundy. “Jockey had one of the legendary ad campaigns of the early ‘80s, and the new movie hilariously depicts pop culture of that time,” said LeeAnne Stables, President of Consumer Products at Paramount Pictures. “Producing this limited edition line is a way to extend the fun and anticipation for the film to fans of the movie and the Jockey brand.”
You can buy the Jockey® Low-Rise Y-front® Brief Style #9008 here 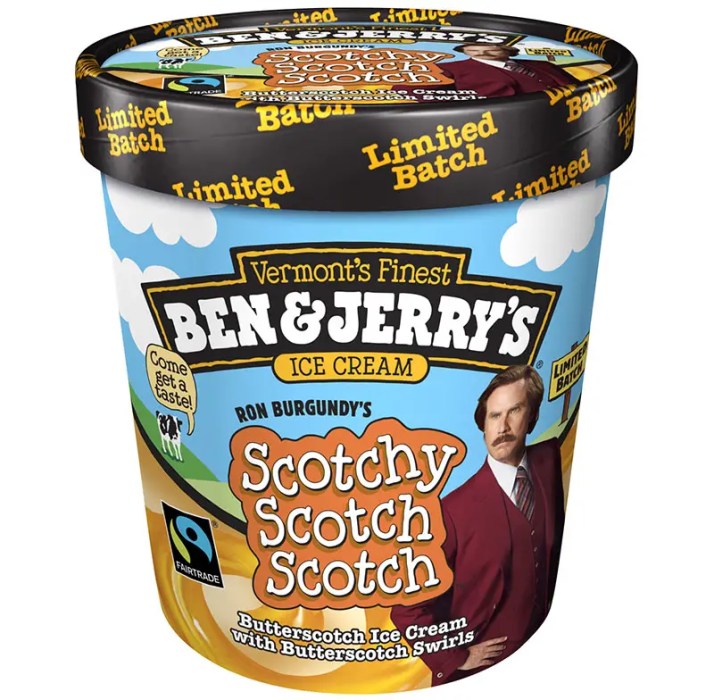 Created in honor of beloved Ron Burgundy, the TV news anchor with a penchant for all things scotch, the flavor is a creamy concoction of butterscotch ice cream with ribbons of butterscotch swirl.

“Having Ben & Jerry’s celebrate the return of Ron Burgundy to the big screen with the introduction of this special ice cream is an exciting and delicious way to build anticipation for the film,” said LeeAnne Stables, President of Consumer Products at Paramount Pictures. “We especially enjoyed the sampling process over the last several months to find the perfect Scotchy scotch flavor.”

Scotchy Scotch Scotch is available now at participating scoop shops across the country. Pints of the flavor will arrive on store shelves over the next few weeks. You can use their online locator to find the flavor near you. 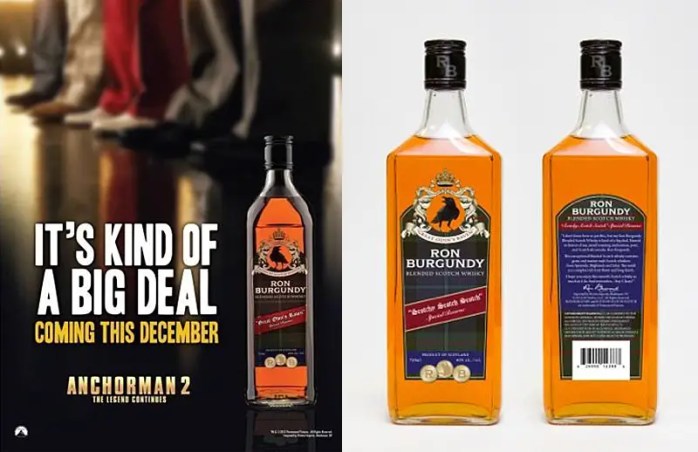 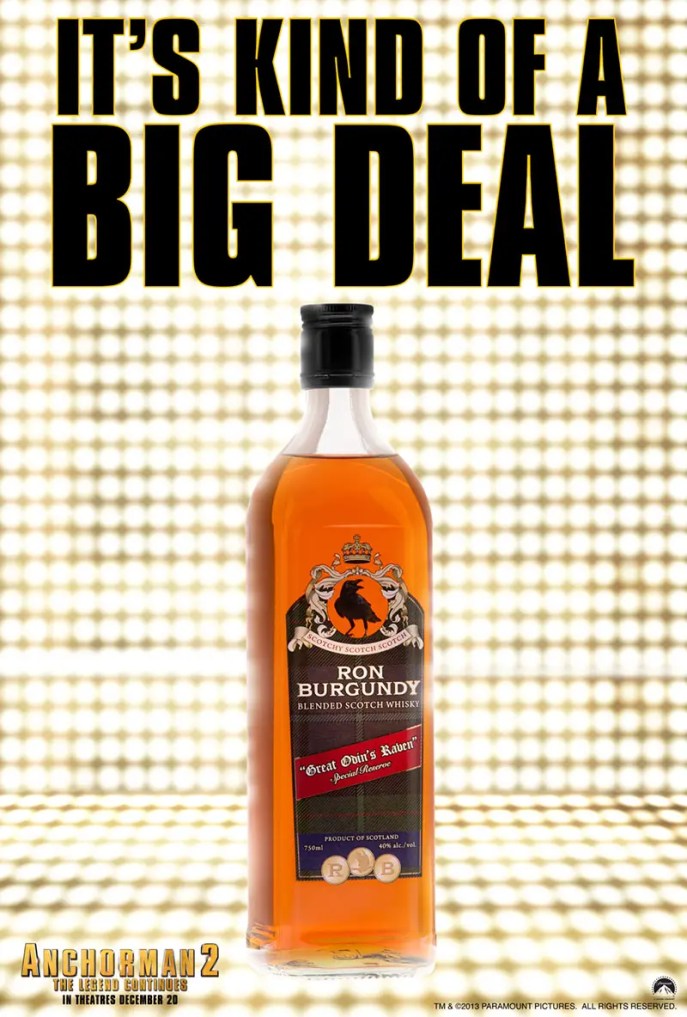 It’s available from Riviera Imports across the US, Canada and other countries. If you don’t see your home state or country listed here, please contact us at [email protected] I love that this product is available! This Ron Burgundy Shearling Collar leather Coat is an exact replica by American Leather Jacket from the Anchorman 2 The Legend Continues Movie. 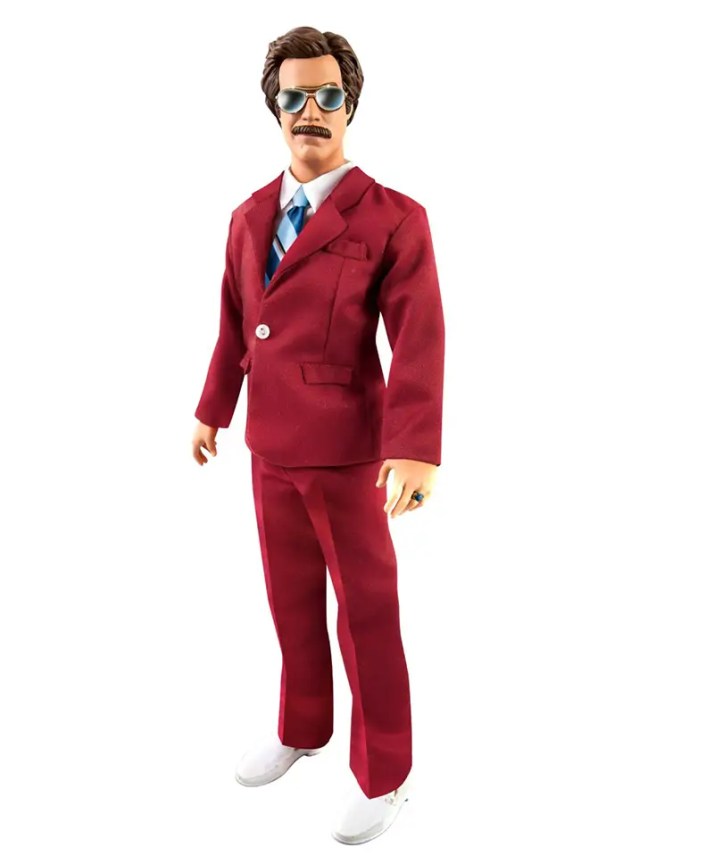 Features Scotchy Scotch Vision and a LOT of cool accessories! Measures 13″ Tall
This amazing action figure states 12 of Ron Burgundy’s wisest gems that have been archived as future instructions for his innumerable progeny:
“I’m very important; I have many leather-bound books and my apartment smells of rich mahogany” (The language may not be appropriate for young children)
Buy the Anchorman Talking Ron 13″ Figure [Explicit Language] Made by MiniBIGS in Warren, Michigan, it’s not an official LEGO product but is made from Genuine LEGO Minifigure Elements and can be purchased for $20 here

Made by Omni Consumer Products and officially licensed from the movie, Sex Panther Cologne is the most awesome cologne ever made in the history of the entire world. Scientifically engineered from space age petroleum distillates and animal byproducts, 60% of the time, it works every time. Unleash your inner animal! Carton package actually growls when you open it! 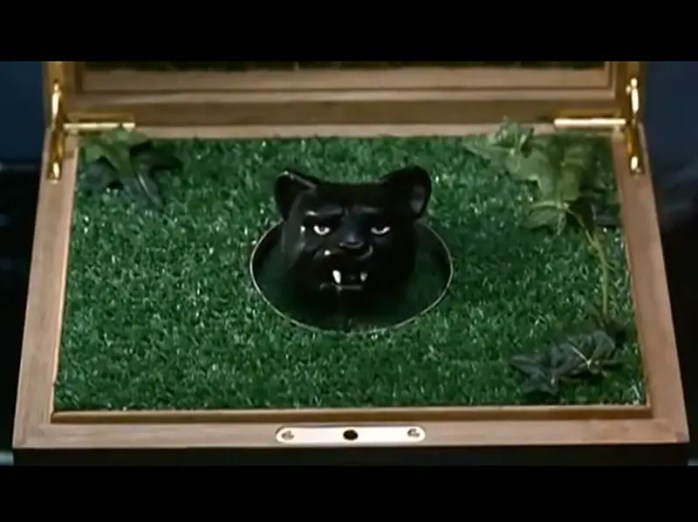 Sex Panther Cologne lures you in with clean and refreshing top notes of juniper and fresh air accord while the heart contains lavender and sensual musk. As the cologne evolves it turns warmer as it envelopes you with masculine notes of cedarwood and sandalwood.
Notes: Fresh Air Accord, Juniper, Lavender, Sensual Musk, Cedarwood, Sandalwood
Style: Fun. Masculine. Animalistic
Category: Fougere (Aromatic)
Made in the USA
buy it here 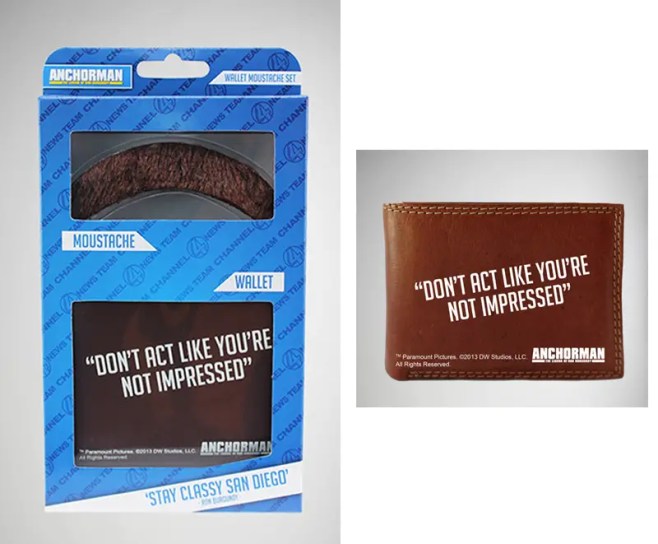 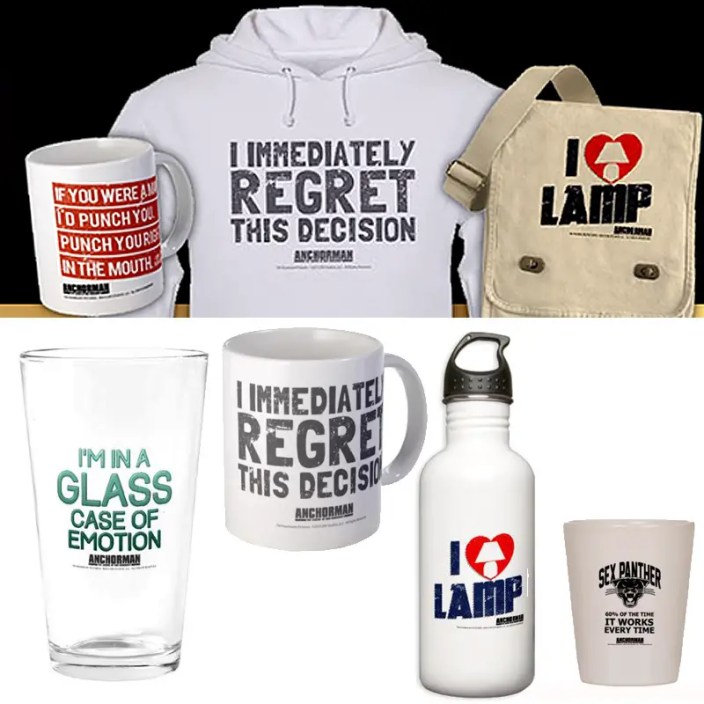 Shop for the above items here

Hot Topic is another official partner with the movie and has a few items such as a talking pen, rubber bracelets and t-shirts: 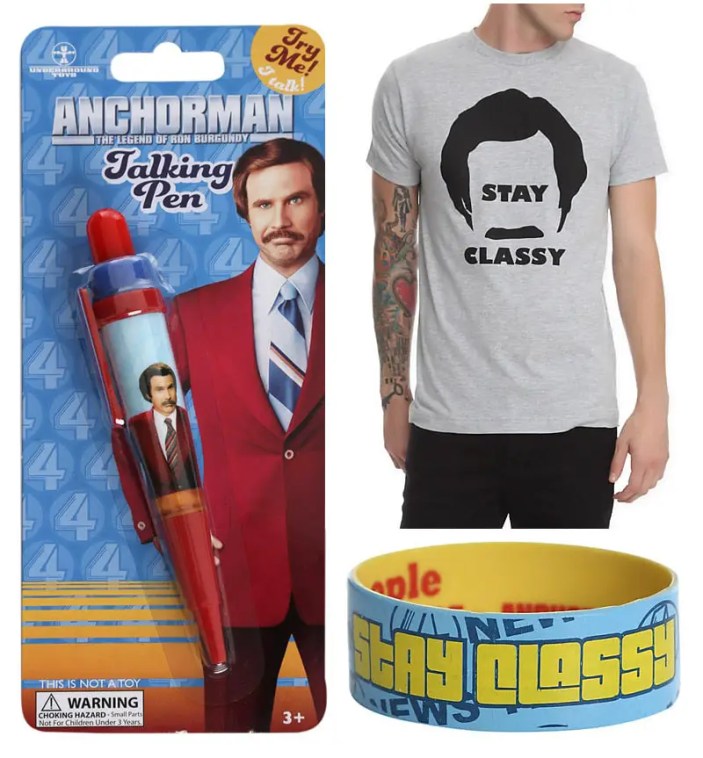 buy the above items here

And of course, his biography, Let Me Off at the Top!: My Classy Life and Other Musings TRIVIA:
The actual Ron Burgundy suit (below) from the original movie was auctioned and sold for a whopping $22,500 through liveauctioneers.com and was described as the following in the auction catalog: WILL FERRELL “RON BURGUNDY” COSTUME FROM ANCHORMAN: THE LEGEND OF RON BURGUNDY – (DreamWorks, 2004) This is pompous but loveable newscaster Ron Burgundy’s (as played by Will Ferrell) signature suit from the movie Anchorman: The Legend of Ron Burgundy. The costume consists of a bright red Polyester blazer, white button-down shirt and blue and white striped power tie. Faux-wood plastic buttons ornament the loud jacket on the front closure, cuffs and hip pockets. Matching red pants end in bellbottoms. A pair of stark, Pat Boone-white, stitched leather loafers with black rubber soles completes the ensemble. Will Ferrell wears this signature suit throughout the hilarious comedy and in key publicity and ad media. A rare and stunning signature costume from a favorite American comedy, endearing comic character and comedian. With the ‘70s behind him, San Diego’s top rated newsman, Ron Burgundy (Will Ferrell), returns to the news desk in “Anchorman 2: The Legend Continues.” Also back for more are Ron’s co-anchor and wife, Veronica Corningstone (Christina Applegate), weather man Brick Tamland (Steve Carell), man on the street Brian Fantana (Paul Rudd) and sports guy Champ Kind (David Koechner) – all of whom won’t make it easy to stay classy… while taking New York and the nation’s first 24-hour news channel by storm. Produced by Judd Apatow, Will Ferrell and Adam McKay. Written by Will Ferrell & Adam McKay. Directed by Adam McKay.

images courtesy of Jockey, Riviera Imports, Paramount, Omni Consumer Products, and the other manufacturers listed in this post.