Tueffel Guitars, made personally by Ulrich Teuffel, are impressive functioning works of art that are purchased, played and collected by some of the most respected and experimental guitarists of our time. above: Ulrich Teuffel in his workshop

Although Ulrich began building acoustic guitars at a young age, it was during his study of industrial design from 1992 until 1996 that was his most formative experience. Prior to that, he was dissatisfied with his guitars and had been looking for a wider challenge which he couldn’t find in the realm of traditional guitar building. Thus began his unique designing and exploring of themes and concepts, resulting in his first guitar, the Birdfish. Two years later he created the Coco series (of which only 23 models were made and now fetch five figures), then the Tesla series and in late 2007, the Niwa. In 2012, the “Antonio” was added to his collection. The newest creation from Ulrich Teuffel is called “Antonio.” It’s an electric guitar with a neck pickup only, made of Honduran mahogany and Ciricote. The guitar is made from Hondurian mahogany. Ulrich used dense tonewood for the through neck and very light parts for the upper body bout. The hardwood parts are made from selected ciricote, such as the fingerboard, headstock cover, jack plate cover, bridge, and binding. The bridge consists of solid aluminum covered with ciciricote. The Aluminum contains all the threads and bores for the studs. The jack plate is also a 3mm aluminium plate covered with ciricote. The scale is a Les Paul scale (24.75″), and Anotonio has a compound fingerboard radius (12″). 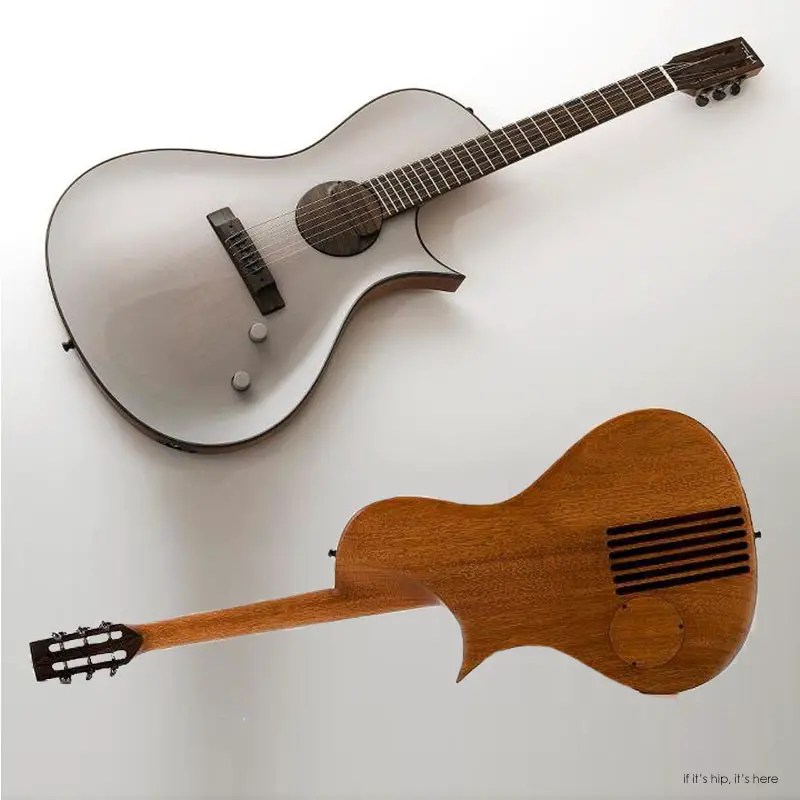 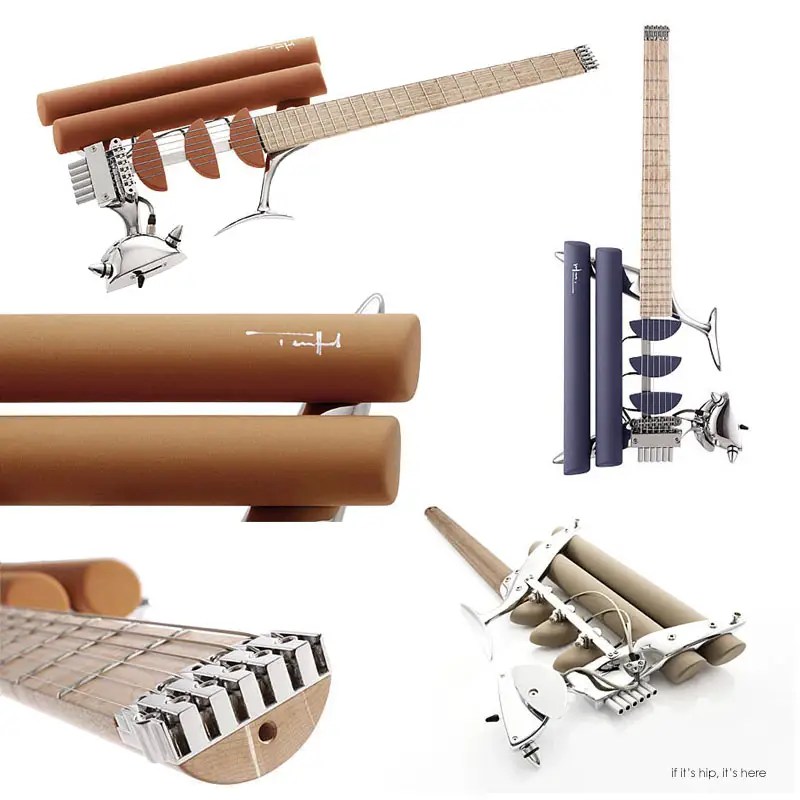 The Birdfish was presented for the first time at the Frankfurt MusikMesse in 1995. Mil Garofalo from Luxemburg was the first person to purchase a birdfish back then. Since then this guitar has become widely recognized. It has appeared in many books and has become a part of many private guitar collections. The British magazine “Guitarist“ picked it as one of the most important guitars of the 20th century. The birdfish has won three design awards and is on display in several museums. It is played by musicians such as David Torn, Henry Kaiser, Hans Zimmer, Billy Gibbons, Dusty Hill, Page Hamilton, Kirk Hammett, Amir Derakh and many others.

Ulrich says his original idea was to build a guitar that was constructed so that the fundamental elements, the tonewoods and the pickups, are put together in a modular fashion. This design not only allows unlimited tonal possibilities, but also results in a very lively and percussive tone. Since 1995 Ulrich has overhauled the Birdfish in four stages. In doing so, he’s been very careful not to alter the identity of the birdfish.

The Birdfish set consists of the standard guitar (without midi) with the tonebars of American alder, a set of tonebars of Michigan maple, three different Humbuckers, two single coils pickups, the flightcase (or optionally the leather bag), a pair of Schaller Security Locks, an extended tool set. The Teuffel Birdfish comes in various colors. The Rhodium Birdfish is a new version of Teuffel’s Bridfish which features all rhodium coated parts, ebony fretboard and pickup covers, and transparent high gloss finish on figured woods. For those of you not familiar with rhodium, it is currently the worlds most precious metal, with a value that is 4 x that of platinum, and is most commonly used on high end watches. The Rhodium Birdfish was released in Europe at the MAD Gallery in Geneva, and at Music MESSE, where it has received overwhelming praise. It has subsequently become the most ordered Teuffel model.
$26,000, Order it here 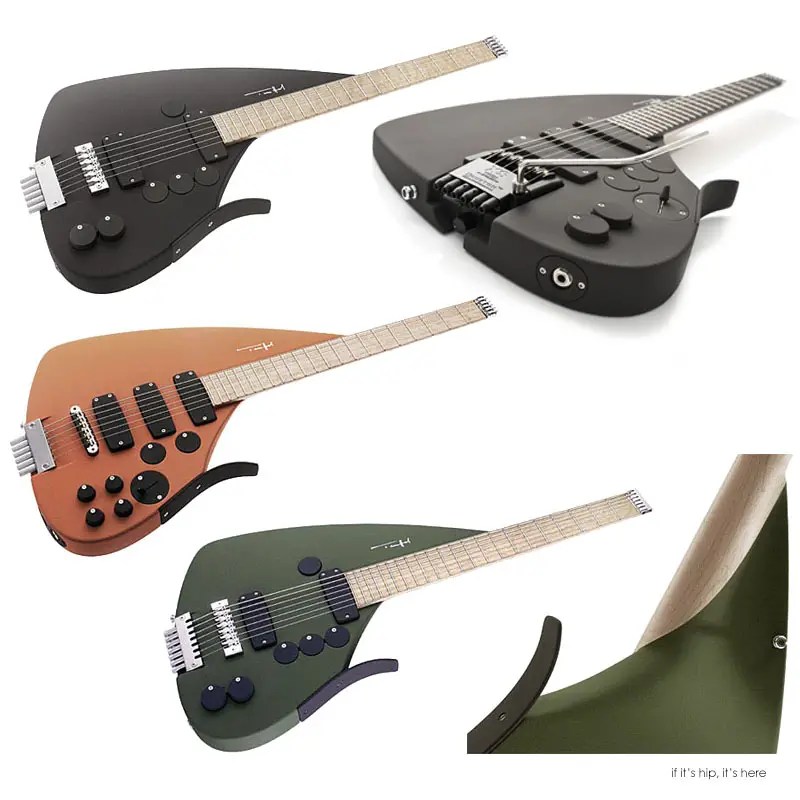 With the Tesla, Ulrich designed a guitar that, along with modern guitars sounds, also has primitive sounds at its disposal. Contact points and push-buttons are situated all over the body, which, when pressed, activate the respective sounds.

When the guitar was presented for the first time at the 2000 NAMM show, Ulrich’s first customers included Henry Kaiser and David Torn, arguably the most experimental guitarists of our time.

Since its introduction, the Tesla has evolved further and now there are also two other versions: a version with three pickups, as well as a MIDI version. He’s also built a few custom versions, such as an 8-string Tesla with a 30 inch scale.

Like the birdfish, the concept of the tesla midi is the complete separation of both signals: midi to converter and magnetic pickups to amplifier. Therefore the pure tesla tone is not affected by the midi converter. Only via the 13 pin jack the acoustic sound of the piezo bridge can be transduced. The magnetic pickups and the magnetic control circuit is connected to the 1/4″ jack only. This is very important for high-gain sounds. The Teuffel Tesla comes in various colors.
$7,900.00, Order it here The Niwa is cut out of a 100 mm (4 inches) block of American alder. The body is shaped to follow your waist. Two tonewoods are visible: American alder for the body and neck, and rosewood for the fingerboard, headstock, pickups and the control knobs. All metal parts are chrome plated.
$9,600.00, Order it here 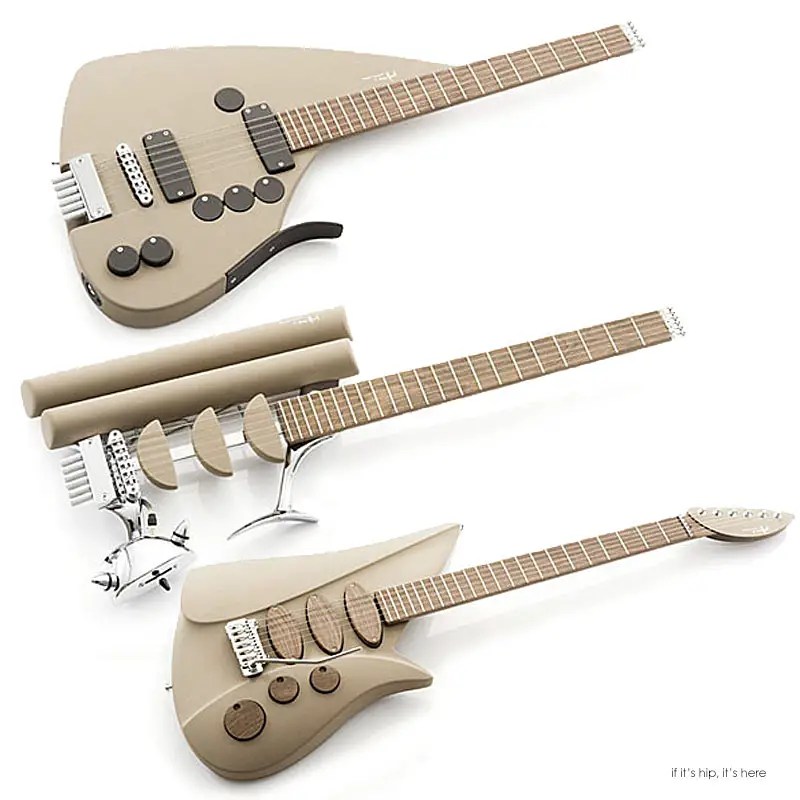 If Ulrich’s serial models are a short program, the prodigy series are freestyle. These guitars can’t be back-ordered once they have found an owner. They are really meant to be unique items. There are 10 numbered sets. Each guitar has a neck made of a single piece of French walnut and modified alnico pickups which underline the warm character of the walnut timber. The instruments are painted in the spot color “sand”. Dimensions and scale are identical with the standard models. Each guitar bears both the serial number and the number within the triplet series and comes with its own case and display. all images and information courtesy of Ulrich Teuffel

Be sure to see our other 8 great posts on beautifully designed guitars here.

Davone Audio’s Newest Speakers, Ray, Are An Homage To The Eames Lounge