The Urushi Bicycle Project consists of 9 exclusively designed bicycles for Sotheby’s by Herman van Hulsteijn. Sotheby’s approached the Dutch designer after seeing his unusual bikes on the internet with their distinctive curved frame. Herman van Hulsteijn suggested designing a tailor-made bike for them using an ancient process that had intrigued him for years. END_OF_DOCUMENT_TOKEN_TO_BE_REPLACED

If Optimus Prime and The Terminator had a child, it’d be the Terminus by M55. Founded in 2006, the Hungary-based M55 Hybrid Bike company builds cutting edge hybrid electric bicycles using the best technologies and materials available. Titanium, carbon fibre, custom airbrushing and even Swarovski crystals are used in the construction of these mean-looking electric machines. And at a price of $36,000 – $39,000 per bike, these are made for a discriminating, and wealthy, bunch. END_OF_DOCUMENT_TOKEN_TO_BE_REPLACED 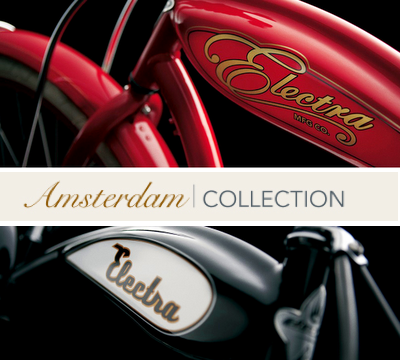 The Electra bicycle company is relatively new to the cycle industry when compared to standards such as Schwinn and Raleigh, but makes some of the best looking bikes out there. They have been receiving some recent press about their two new Alexander Girard bikes from the design community, but if you’re not familiar with the company and their complete line, you should be. END_OF_DOCUMENT_TOKEN_TO_BE_REPLACED